We Still Use These 5 Native American Inventions Today

From the canoe to snow goggles, and in celebration of Indigenous Peoples' Day, we take a look at these Indigenous innovations that are still widely used today. 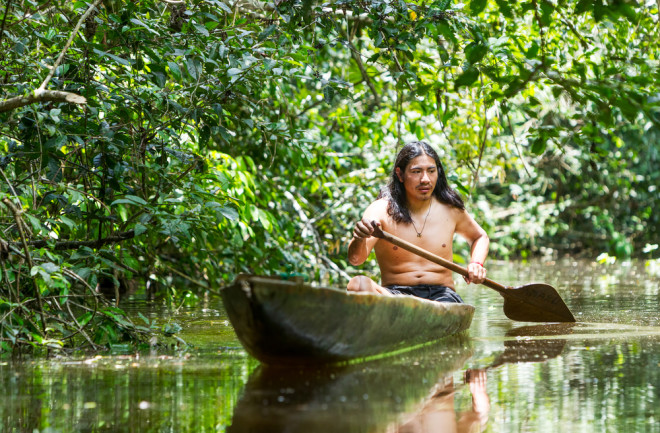 This article was originally published on November 11, 2021.

The wide-ranging contributions of Native Americans are numerous — and still impact the world in many ways. They were the first to cultivate certain plants, including corn, avocados and potatoes, which became diet staples around the world.

Native Americans also were the first to domesticate some animals, including turkeys, guinea pigs, and honeybees. Native Americans are also credited with the invention of many items and concepts still used today, such as syringes, cable suspension bridges, oral birth control, baby bottles, sunscreen, and raised-bed gardening. Let’s take a look at some of their inventions that have stood the test of time and remain an important part of modern life.

Explorers on Roanoke Island saw Native Americans traveling the waters in long vessels large enough to carry 20 people. These are what came to be known as canoes. The Indigenous inhabitants employed a process of starting a small fire at the base of a preselected tree. They kept the controlled fire going until the tree fell. The process was repeated to shorten the trunk to the size they needed. Next, rosin and gum were used to burn coals into the tree, which were removed by scraping with shells. This continued until they created a deep enough opening to carry occupants. In all, it was a laborious, time-consuming process.

The name Charles Goodyear is synonymous with vulcanization — the hardening of rubber. But it was really Mexico’s first civilization, the Olmecs, who pioneered the use of rubber. Later, the Maya and Aztecs developed ways to create different products from rubber, such as rubber bands used as handles for tools, rubber balls for ritualistic games, and rubber-soled sandals. Spanish explorers were amazed by this new material when they arrived in the 1500s, and described the process used to make it.

Latex was collected from rubber trees and then combined with the sap from morning glory vines until it hardened into rubber. The process was long, starting with the extraction of the latex — which was done in a way similar to that of collecting maple syrup. Then it needed to be hardened for hours over a fire, while more and more latex was poured on a stick until it morphed into black rubber.

Today we think of sign language as a form of communication for people with hearing impairment. But Native American people were using a form of sign language way before others, and not exclusively for communication among deaf people. Although there’s no consensus on precisely when it developed, its use was noted by Spanish colonizers among tribes in Florida.

Native American people called it “Hand Talk,” although there are other names, including Plains Indian Sign Language (PISL) and American Indian Sign Language (AISL). Native Americans comprised many different cultures and tribes, without a central language. Hand talk enabled tribes that spoke different languages to effectively communicate with one another in trade interactions or times of council or conflict. AISL is in danger of being lost, along with other Indigenous languages, although there have been some efforts to preserve Native American language. Some members of certain tribes in the U.S. and Canada still practice AISL. Check out this interesting video about the differences in PISL and ASL (American Sign Language).

Snow blindness, otherwise known as photokeratitis, is caused by the intense ultraviolet light in a white, snowy environment — which occurs in both sunny and cloudy weather. A very painful condition, it’s always been a challenge for people who needed to travel through such terrain. In order to address this problem, the Inuit people developed snow goggles.

They were designed to fit tightly on the face, with the only light coming through narrow slits that were carved out. The design was pragmatic and useful. It reduced the damaging light that reached the optic nerve and increased visual acuity. At first, snow goggles were made from animal bone, because wood was not plentiful where the Inuit lived. But once access to wood increased, so did the production of wooden snow goggles. Of course, now there are many types of goggles used for eye protection in a variety of conditions, but the foundation of them all were the snow goggles.

Today asphalt (tar) is used for roads, roofing materials, driveways and waterproofing of materials. Thousands of years ago, Native Americans in California innovated the use of a component of tar, called bitumen, for similar purposes. The Chumash people collected tar balls that would naturally seep from the ground and use them for caulking of ocean crafts, making drinking vessels, creating casts for broken bones, and waterproofing of baskets.

They also chewed it in what could be considered an ancient form of gum. Another California tribe, the Yokuts, traded tar balls and used the sticky substance for adhesive purposes. They also incorporated it into decorating masks, pottery, knives and clothing. This was done by inlaying abalone shell into the tar used on those items.