A team discovered a second ancient canoe in Lake Mendota, and this time it's 1,800 years older. 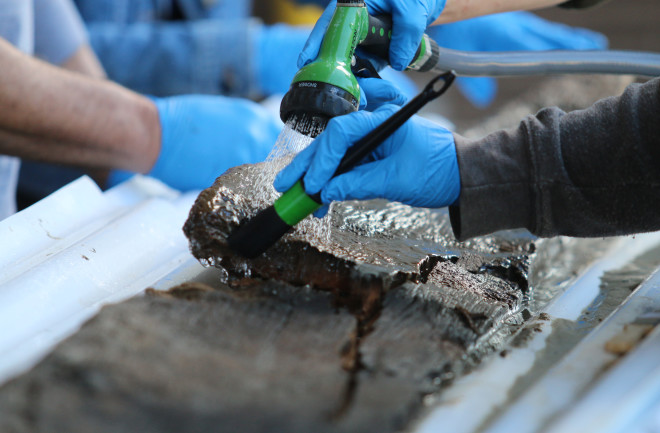 Almost a year after finding a 1,200-year-old canoe in Wisconsin’s Lake Mendota, a team of Wisconsin Historical Society archaeologists and their partners from Wisconsin’s Native Nations announced last week that they recovered another canoe from the same area of the lake. This second canoe, they say, is around 3,000 years old, making it 1,800 years older than the first and 1,000 years older than any other such artifact from the Great Lakes area.

Archaeologists speculate that the first inhabitants of Wisconsin appeared in the area sometime around 10,000 years ago. Although they suspect that these inhabitants probably traveled through the waterways already at the time of their arrival, this 3,000-year-old find provides the oldest physical proof of their use of canoes.

Not only that, but the almost 15-foot-long artifact also helps archaeologists piece together a more accurate picture of the first inhabitants of Wisconsin. The canoe illuminates the way that their construction and use of these boats changed over time.

In addition to illuminating canoeing practices, the artifact also provides insight into the transformation of Lake Mendota. In fact, the close proximity of both canoes in the lake may indicate that its shoreline has shifted over time.

"Since it was located within 100 yards of where the first canoe was found at the bottom of a drop-off in the lakebed, the find has prompted us to research fluctuating water levels and ancient shorelines to explore the possibility that the canoes were near what is now submerged village sites," Skibo says in a press release.

According to the team, the Native inhabitants of Wisconsin crafted the 3,000-year-old canoe out of a single, massive segment of a white oak tree.

Now freed from the lake, the canoe will be cleaned and cared for by members of the Wisconsin Historical Society and Wisconsin’s Native Nations before undergoing a two-year preservation process. They will conclude the process by freeze-drying the whole canoe, removing all remaining water from the nooks and crannies of the 3,000-year-old wood.

"The recovery of this canoe built by our ancestors gives further physical proof that Native people have occupied [Lake Mendota] for millennia, that our ancestral lands are here, and we had a developed society of transportation, trade and commerce," says Marlon WhiteEagle, the president of the Ho-Chunk Nation, according to a press release. "Every person that harvested and constructed this caašgegu [white oak] into a canoe put a piece of themselves into it. By preserving this canoe, we are honoring those that came before us."

Where is the Lost City of Atlantis — and Does it Even Exist?