After The Storm Passes, Hurricanes Leave These Hidden Impacts Behind

Hurricanes — like Hurricane Ian — destroy bridges and homes, but they also have disastrous effects on the environment. 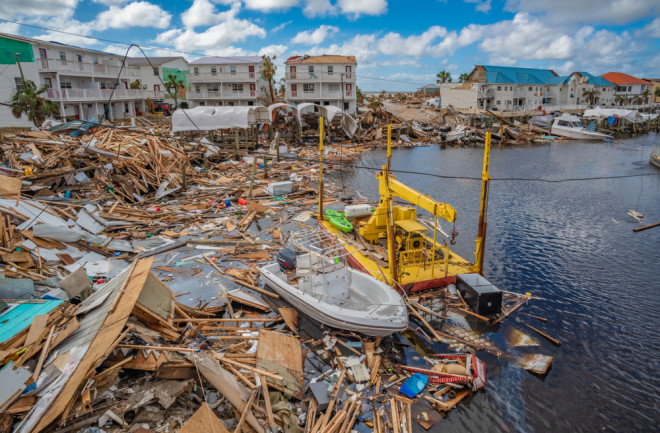 Recently, we saw Hurricane Ian sweep through Florida, out into the Atlantic, and make landfall again in the Carolinas. It was recorded as the deadliest hurricane to hit Florida since the 1935 Labor Day hurricane.

With over 100 casualties, thousands are still without power, and many are without their homes. Hurricanes like Hurricane Ian can destroy bridges, roads, power lines, and homes. But what you don't often hear about are the devastating costs that are left behind when the storm clears.

As the storm surge floods in, it can impact many different marine animals. The storm can sometimes even carry in marine animals. Some claim that a shark was seen swimming the streets of Fort Myers during the Hurricane Ian storm surge.

Some marine animals are also left vulnerable to the change in water. When ocean water mixes with freshwater flooding, there can be a change in salinity. Fish and other marine life that cannot tolerate such a sharp change in salinity can die.

Wind from the storm can also move aside surface waters, like smaller ponds and lakes, which stirs up sediment, bacteria and low-oxygenated waters from the bottom. Hydrogen sulfide could be in the sediment, which can kill fish and other life if there is a high enough concentration. According to the Florida Fish and Wildlife Conservation Commission, hydrogen sulfide is also responsible for the sewage and rotten egg smell. As floodwaters recede, fish can also get caught in pools of water that are no longer connected to their main body of water. As the water dries, the fish can suffocate and die.

According to the National Oceanic and Atmospheric Administration, rough undercurrents and the rapid change in water salinity, along with change in water temperatures can impact sea turtles, shellfish and slow-moving fish.

Along with the storm surge, intense wind and heavy rainfall gusts can harm land animals. In 2010, the winds from Hurricane Earl allegedly blew a pelican off-course from Florida all the way to Nova Scotia. A few months after the hurricane, the pelican, nicknamed Ralph, returned to the U.S. with help from a wildlife rescue.

Some animals are not so lucky, unfortunately. Hurricane Gilbert nearly wiped out the Cozumel Thrasher when it raged through Mexico in 1988. In 1989, when Hurricane Hugo hit Puerto Rico, it cut the population of the already endangered Puerto Rican Parrot in half.

According to the United States Geological Survey, a hurricane's strong winds and storm surges can reshape the coastline and coastal landscape. Waves can wash away beaches, dunes and even barrier islands. Beach and dune erosion can harm animals who make their homes along the coast. Coastal birds like piping plovers that build their nests along the beach may lose their nesting habitat, which can significantly impact their population.

These winds can also severely damage trees and crops. Especially in Florida, many trees are vital providers of food for both animals and people. According to Bloomberg, Hurricane Ian hit during a critical part of Florida's growing season, disrupting food growth that could possibly cause significant setbacks for fruit and vegetable supply this winter.

Heavy rainfalls and storm surges can wash sediment, debris and pollution into the ocean. This can cause the water's turbidity — or cloudiness — to increase, which makes it difficult for sunlight to penetrate the sea grasses and vegetation that need it. In 1972, after Hurricane Agnes passed over the East Coast, there was so much sediment in the Chesapeake Bay that seagrasses — that provided food and habitat for fish and crabs — died, along with the fish and crabs in it.

See how Hurricane Ian changed the color of the Gulf of Mexico.

Besides sediment, gasoline, motor oil and sewage can all find their way into waterways, contaminating drinking water and the ocean. These pollutants can seep into the drinking water, possibly harming people. They can also settle over coral reefs and marine habitats, negatively impacting the plants and animals that live there. Below is a satellite image showing contaminated water running into the ocean.