The devastating cyclone churned up so much sediment that a huge swath of the gulf has temporarily changed color. 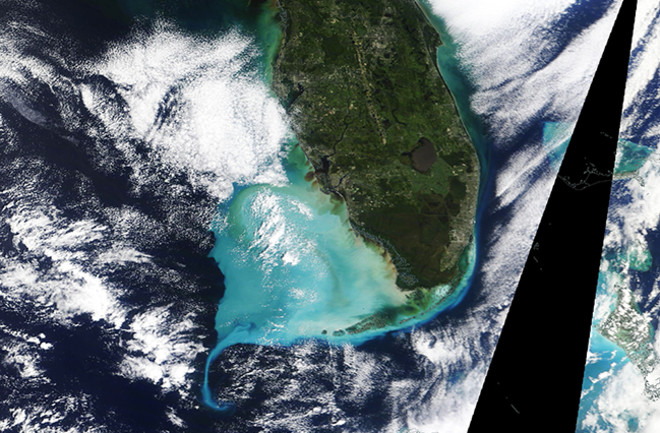 The huge swath of brilliant turquoise seen off the coast of Florida in this Sept. 30th Terra satellite image is the result of Hurricane Ian's passage. The cyclone, which made landfall in Florida on Sept. 28th, churned up enormous quantities of sediment, causing a dramatic, but temporary, change in the color of the gulf's waters. For a before-and-after animation of satellite images, see below. (Credit: NASA Worldview)

As it ripped across Florida, Hurricane Ian caused a mind-boggling amount of damage, shredding roads, ripping up trees, smashing and inundating homes, and leaving a huge portion of the state without power and drinking water. A final death toll is not yet known, but it could be in the hundreds.

And the storm is not done wreaking havoc yet.

After restrengthening over the Atlantic, Ian has made landfall today in South Carolina with sustained winds of 85 miles per hour. "This is a dangerous storm that will bring high winds and a lot of water,” South Carolina Gov. Henry McMaster tweeted.

Ian's Striking Impact on the Gulf of Mexico

Before making landfall in Florida on Sept. 28th, Hurricane Ian strengthened into a Category 4 hurricane. The storm also sprawled across a particularly large area. In fact, the entire extent of the hurricane-force wind field of Hurricane Charley — a Category 4 storm that struck the same portion of the Florida coast in 2004 — would have fit inside Ian's eye!

Before and after images show the transformation of the Gulf of Mexico's waters by Hurricane Ian. The first image in the animation was acquired by the Aqua satellite on Sept. 25th, before the storm's passage. The second image was acquired on Sept. 30th. (Credit: CIMSS Satellite Blog)

As you can see in the image at the top of this story, and in the animation of satellite images directly above, Hurricane Ian's enormous power and sprawling size helped it churn up large amounts of sediment in the waters of the Gulf of Mexico. So much so that it transformed the color of the Gulf's surface waters, producing a brilliant turquoise color.

The satellite imagery also reveals darker material flowing out into the Gulf from land — turbid discharges from flooding caused by storm surges and overflowing rivers.

This phenomenon is by no means unique. Other hurricanes have churned up sea sediments and caused turbid outflows before. For one example, see the imagery in this NASA Earth Observatory story focusing on 2018's Hurricane Michael.

Even so, the temporary transformation of the waters off southwestern Florida wrought by Ian seems particularly dramatic.