Vinyl vs Digital: Which Sounds Better?

Some people swear vinyl recordings sound best. Is it nostalgia or is it science? 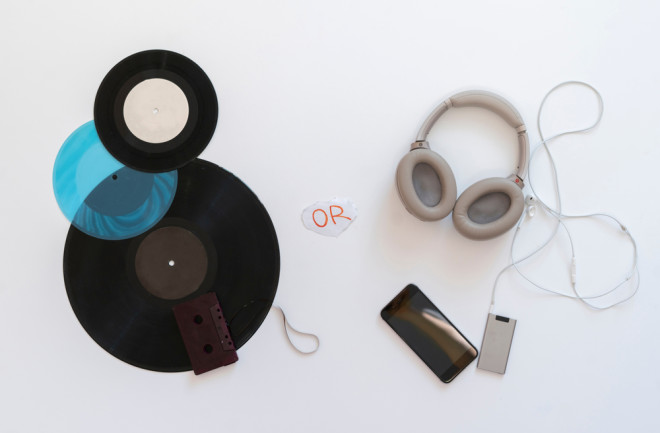 Have you ever been cornered at a party by an audiophile who insists (usually at some length) that vinyl sounds superior to digital? Or have you ever noticed that you prefer vinyl yourself? Is that just nostalgia talking? Or is there something to the claim?

One thing is certain — vinyl is making a comeback. For the first time since 1986, vinyl recordings sold more than CDs, with vinyl sales increasing by almost 29 percent in 2020 alone.

A vinyl recording is an analog copy of sound pressed into vinyl in the shape of the original sound wave. When you settle a vinyl disc onto your turntable and ease the needle (aka stylus) into the groove, the pattern is “read” by the needle, which creates an electrical signal that is passed on to the speakers, which generate the sound. A digital recording, on the other hand, takes the waveform of the original sound and transforms it into a stream of ones and zeroes. When you slide a CD into a CD drive, this pattern is being “read” by a laser before being sent to the speakers. So yeah, they’re definitely different.

But is one better than the other? Well, that comes down to what you mean by “better.” There might be many excellent reasons for buying vinyl records — cover art, adding to a collection, supporting your local record shop — but fidelity is probably not one of them.

Jason Corey, recording engineer and professor of performing arts technology at the University of Michigan says that by almost every objective measure, given an acceptable bitrate (the amount of data per second the audio file contains), digital is going to be superior to vinyl. What are those objective measures? Corey lists four:

Distortion: A measure of how well the recording represents the original source.

Noise: Any sound you don’t want to hear in a recording, caused by dust on the album or small scratches in the vinyl, for example.

Frequency response: How well and how evenly the recording reproduces the very lowest and very highest frequencies of the original source.

Dynamic range: The difference between loud sounds and quiet sounds. Digital allows for a much wider dynamic range than vinyl.

Because an analog recording carves a continuous representation waveform into the vinyl while digital merely samples the waveform, vinyl-loving audiophiles sometimes argue that the sampling required to make a digital recording doesn’t get the full sound. However, that’s not quite the problem. Even though digital recordings require that snapshots of the audio are taken at given intervals, as long as enough snapshots are taken, we are still getting a true representation of the original sound, Corey explains.

For example, if a digital recording contains at least 40,000 samples or snapshots per second — and CDs use 44,100 samples per second — we can accurately reconstruct the original, continuous analog waveform up to the limits of human hearing (frequencies up to 20,000 Hz).

The bottom line is that digital is definitely a closer copy of the original sound. However, that doesn’t mean you’re going to like that sound better. Audiophiles often say that vinyl has a “warmer” sound. That’s a subjective call, nothing we can measure like frequency response or dynamic range. But it’s obviously something many people notice, and some prefer. “A slight distortion, the needle scraping across the vinyl, may just be something people find pleasing,” says Corey.

For older listeners, nostalgia could be playing a role, too. Pops, crackles and hisses are what the Rolling Stones sound like, right?

But there may be more to it than sound. Many wine lovers spurn screw-top caps even when those caps are said to preserve the wine better. And it’s not always about snobbery. For many, it’s about the ritual of uncorking the bottle. Something similar may be going on with audiophiles who are devoted to vinyl. Selecting the LP and sliding it out of its jacket, brushing away any dust, placing the vinyl disc on the turntable, gently positioning the tonearm — the entire ritual might well add something ineffable to the listening experience.

Ken Laster hosts the podcast Jazz and Beyond and is a member of the Hartford [Connecticut] Jazz Society. The sheer amount of digital recordings and the ease of accessing them has turned music into a “cheap commodity,” he writes in a recent posting on the society’s website. “The experience of discovery, acquiring, and listening to your music is now so easy and commonplace that its value has been diminished.”

As Corey puts it, “There are factors that can influence our perception of sound quality that have nothing to do with the sound itself.” And those factors may just make vinyl sound better, at least to some listeners.

More From Discover
Planet Earth
Our Dogs Do Manipulate Us, According to Science
Mind
Lies, Deception and the Criminal Justice System
Mind
Humans Evolved To Be Lonely
Mind
Why Are People More Attractive the Longer You Know Them?
Mind
The Emotional Psychology Behind Investing
Mind
What to Know About Pandemic-Driven PTSD
Recommendations From Our Store
My Science ShopDiscover STEM Kits
My Science ShopDiscover 2022 Calendar
My Science ShopStrange Science
My Science ShopElements Flashcards
Shop Now
Stay Curious
Join
Our List