What the Loss of Pure Bison Means for Conservation

A study this spring revealed that genetically pure bison have likely disappeared. 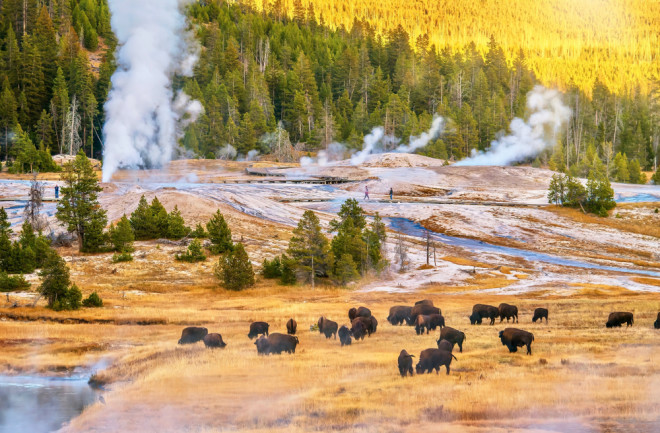 I was shocked by Pete Geddes’ words in 2020: “I bet Yellowstone doesn’t have genetically pure bison. Nobody knows. They have never tested them.”

The vice president of American Prairie told me this while we were chatting inside the conservation organization’s headquarters in Bozeman, Montana, roughly 80 miles from Yellowstone National Park. The park has long been the gold standard for genetic purity in American bison (Bison bison). It is home to the only bison herd in the U.S. that has continuously grazed the same landscape since America’s national mammal flirted with extinction a century ago.

Yellowstone’s founding animals — two dozen bison that squeaked through the species’ low-point — were thought to be some of the last genetically pure animals in existence. This belief, together with the fact they roam such a large and wild landscape, has earned them widespread notoriety. The bison in Yellowstone occupy a sacred place in American conservation lore, championed by a die-hard advocacy group, The Buffalo Field Campaign. Geddes’ claim flew in the face of the conventional wisdom.

Two years later, a study published this past April in Scientific Reports proved Geddes was right. In a first-of-its-kind investigation, Ph.D. candidate Sam Stroupe and his collaborators at Texas A&M took a genome-wide look at the DNA of all seven known bison lineages in the U.S. These included national park bison from Yellowstone, Wind Cave and Canada’s Elk Island — three herds that were most likely to contain genetically pure bison. Stroupe’s team used several different methods to compare the bison genomes to those of domestic cattle. They found cattle genes in every bison they examined.

The bottom line for conservationists is that herds of North American bison untainted by cattle genes are most likely gone. “Unfortunately,” Stroupe and his colleagues wrote, “they all have a history of bison-cattle hybridization.”

Bison genetics legend James Derr, a co-author on the study who for decades held out hope for genetically pure bison, admitted, “I was extremely disappointed when I actually had the chance to sit down and look at the data.”

To a first approximation, genes matter in wildlife conservation. “Species conservation is more than skin deep,” Derr said to the journal Nature in 2009. “It is more than how they look, it is how they are — that’s the genome.” A genome gets to the heart of things in a way that other markers such as visual appearance or behavior do not.

Stroupe’s study sounds like devastating news for bison conservation. But what does it actually mean?

On one hand, a cattle-free genome was thought to symbolize evolutionary independence from humans. But that independence was already highly questionable.

Jim Bailey, a retired professor of biology from Colorado State University and the Director of the Montana Wild Bison Restoration Coalition, has worked hard to champion the integrity of the wild bison’s genome. Plains bison, he insists, must live free and be subject to the full range of evolutionary forces. But Bailey also knows plains bison evolved under the influence of human hunting.

The bison’s ancestors on the continent, Bison priscus and Bison antiquus, were bigger and slower than B. bison. Their immense size was a disadvantage when Homo sapiens showed up. “The evolution of modern bison,” Bailey says, “was a switch from a ‘stand and defend’ predator response to a strategy based on mobility — in response to the advent of a new predator that threw spears.” People, in other words, have already shaped bison DNA (though some researchers suspect climate has been a bigger influence).

Another consideration is phylogenetic. The Bison genus may not be all that distant from the Bos genus anyway. In other parts of the world, bovine-bison crosses are known to be part of the bison’s evolutionary story. In Eurasia, steppe bison (Bison priscus) hybridized with aurochs (Bos premigenius), the ancestor of all domestic cattle, 120,000 years ago. The result is today’s European bison (Bison bonasus).

Genetically pure or not, bison in North America have undergone an impressive recovery since the early 1900s. Most of the half-million animals alive today exist on ranches where they are bred for meat. Roughly 30,000 are protected in National Parks, on conservation lands and in private herds. Knowing that all of them contain cattle genes shifts the conservation calculus a notch.

“It opens some opportunities up,” Derr says. “Maybe we can use this information to establish new herds that don’t have to be restricted to Yellowstone bison or Elk Island bison.”

Back at American Prairie, Geddes says the discovery will have little effect on their operations: “It’s a question of aesthetics, I think.” Complete genetic purity of bison is not essential to American Prairie’s mission to restore a functioning ecosystem on the Northern Great Plains. “From a practical standpoint, there is absolutely no change” he told me. “We just have to move forward with the way bison are and be grateful they are still on the landscape given the near extinction event they went through.”

Stroupe agrees. “There is nothing we can do about it,” he says. “It is much better to have bison than not to have bison […] So I’m still optimistic.”

Derr is also looking to the future. He notes that bison should have become extinct during the Pleistocene period, when the majority of North America’s large mammals succumbed to shifts in climate and overhunting. But that didn’t happen to bison. “Bison are a survivor,” Derr said. “Introgressive hybridization with another species is just one of the things they have survived along the way.”

Hybridization with close relatives remains a threat for many species, from red wolves to polar bears to wild daisies. What Stroupe’s study says about plains bison may be instructive for other conservation dilemmas in the Anthropocene. In a crowded world, wild organisms are forced to respond to numerous aspects of human influence. We can expect this influence to have a genetic effect.

Species conservation remains more than skin deep. But human activities may already be under the skin of many of the lifeforms we are trying to save.

7 Things You May Not Know About Charles Darwin