10 Of The Freakiest Animals Found In The Tropical Rainforest

Colorful mandrills to camouflage geckos, the rainforest is full of unique-looking animals. 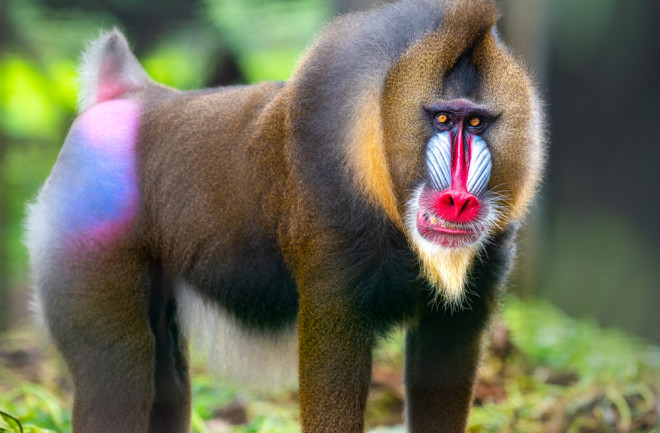 In the tropics, species evolve twice as fast as those in more temperate climates. Warmer temperatures speed up chemical reactions, introducing mutations at a faster rate and generating novel characteristics. It's, therefore, unsurprising that the tropical rainforest is home to some of the quirkiest creatures on Earth.

The mandrill is a magnet for superlatives: It's the largest of all monkeys and one of the most colorful mammals. They're known for the blue and red markings lining their snout and their multi-colored behinds, which become brighter when they're excited. Despite their dynamic exterior, mandrills are shy and run away from researchers, making them tricky to study in the wild. Found only in the rainforests of equatorial Africa, the region's deforestation and poaching have earned them a spot on IUCN's red list of vulnerable species.

So-called because its sting has been compared to the feeling of being shot, the bullet ant has one of the most painful bites ever recorded. Found in the rainforests of Central and South America, Venezuelans call it hormiga veinticuatro, or the 24-hour ant, after the time it takes for the pain to subside. What makes the sting so agonizing is a substance called poneratoxin, which excites synapses and sends a volley of impulses to the brain's pain center.

Native to the Amazon basin, the candiru fish, or 'toothpick fish' owing to its diminutive size, has earned a bad reputation for swimming up the urethra of male bathers. This is generally regarded as a myth, but other animals are less fortunate. The tiny, translucent candiru sneaks up on larger fish, swimming up the gills and securing its position by erecting a ring of umbrella-like spines. It then chews a hole in its host's artery, drinking its blood until its belly becomes distended with its sanguineous meal.

The satanic leaf-tailed gecko, found only on the island of Madagascar, is a master of camouflage. Its mottled brown skin, replete with mossy splotches and vein-like ridges, makes it the perfect imitation of a decaying leaf. Any predator clever enough to see through its arboreal disguise and mount an attack will be in for a fright. The leafy gecko opens its mouth, sticking out a blood-red tongue and unleashing a chilling scream that will frighten off the boldest of predators.

Just a couple of inches long, this tiny tree frog gets its name for the translucent skin that showcases its internal organs. Yet their backs are a vivid green, making their see-through stomachs a scientific mystery. In a 2020 study, scientists analyzed photographs of the frogs using computer modeling and explained how their translucent legs, which wrap around the frog's seated body, blur its edges and make their outline less visible to predators.

Silently sitting in the vine-covered trees of the Indonesian rainforests is the tarsier, one of the smallest and oldest of the Earth's primates. A velvety-soft ball of brown fur with two golden saucers for eyes, the tarsier is also one of the strangest. Their eyes are enormous, each weighing as much as its brain. Moving them would expel too much energy, so the tarsier has evolved a head capable of rotating 180 degrees. The only completely carnivorous primate, tarsiers ambush their prey by pouncing on their powerful hind legs.

There are around 7000 species of assassin bug, some of which you'll find scuttling around the jungle floors of South America. They more than live up to their name, stabbing their prey with their specialized proboscis, called a rostrum, then injecting a toxin that paralyzes the insect and liquefies its innards. The assassin bug sucks up the soupy tissue and attaches the corpse to its back like a creepy backpack. Some carry around a whole pile of dead insects, which serves as both protection and camouflage.

Known as the "jewels of the rainforest" for their ruby, sapphire and topaz colors, poison dart frogs are among the most vibrant animals of Central and South America but also the most deadly. Their bright colors serve as a warning to predators that they're in for a nasty surprise: some possess enough venom to kill ten people. One of the most toxic species, Phyllobates terribilis, produces the deadly poison batrachotoxin, which blocks nerve transmission to the muscles. Frogs reared in captivity don't secrete the poison, suggesting it is obtained from their natural diet.

Technically a fish, this eerie creature stuns its prey with up to an 860-volt electric shock. Around 80 percent of their meter-long (about 3 foot) body consists of electricity-generating cells, called electrocytes, which together function as a type of living battery. At the bottom of the Amazon River, males build nests out of saliva for the female to lay her eggs, often thousands at a time. One enthusiastic eel is reported to have spawned 17,000 eggs in just one reproductive cycle.

In the Peruvian amazon, an arty arachnid collects dead leaves and insects to build a large dummy spider on its web. The giant self-portrait is thought to function as a defense mechanism, its size deterring would-be predators. The ingenious spider then acts as a puppet master, pulling the strings of its web to make its creation dance. A similar species have been described in the Philippines, yet they have cultivated a distinct style: while the Peruvian spider builds its decoy with the legs floating downwards, its Filipino cousin builds his with the legs fanning out.

Meet 8 of the World’s Longest-Living Species

A New History For The Tropical Forests Of The Americas