What's The Spooky Science Behind The Ouija Board?

Spoiler: It’s not ghosts. But this spooky game, or tool, does involve what some psychologists call 'zombie mind.' And it reveals other fascinating things about the human psyche and behavior. 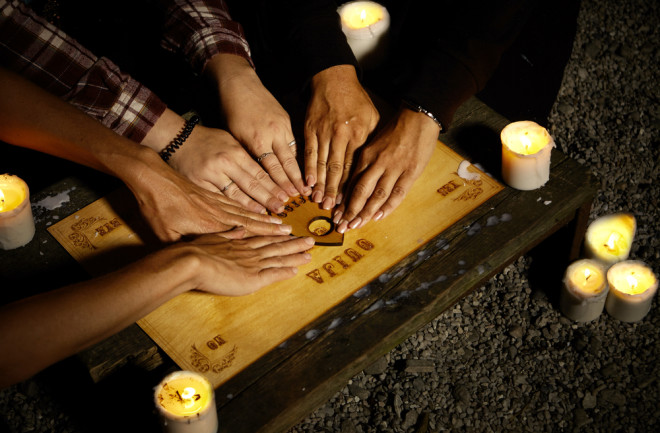 Maybe you’re at a sleepover, or a Halloween party. Maybe it’s night, it’s probably night. You sit before a board with the alphabet printed on it, a little sun and moon, the words “yes” and “no” and “goodbye.” You rest the tips of your fingers on a heart-shaped plastic platform and ask a question. You’re not moving it, you swear, and your friend says they’re not moving it either, but the platform glides across the board, from one letter to the next, spelling out a name, an answer to a question it couldn’t possibly know. What’s really happening?

For over 130 years, Ouija boards have amazed, entertained, and even frightened people with mysterious messages from the beyond. But more recently, they’ve provided psychologists with insights into the human body and mind, living up to an 1891 advertisement for a Ouija board proclaiming that “for the scientific or thoughtful its mysterious movements invite the most careful research and investigation — apparently forming the link which unites the known with the unknown.” Ouija boards don’t tell us much about the spirit world, but they can tell us about ourselves.

Chris French, a professor emeritus of psychology at Goldsmiths University of London, has spent decades studying the science behind supernatural experiences, but his first brush with Ouija boards came when he was an undergrad. “It used to be regular Friday night entertainment for me,” he recalls. He and his friends made their own Ouija board by writing the alphabet on a piece of paper and using an upturned wineglass as a planchette. “I don't think any of us really believed that we were communicating with spirits, but it was great fun.”

French recalls the way that the wineglass really felt like it was moving by itself: “The illusion that it is moving on its own is incredibly strong,” he says. However, he adds, he and his friends were simply experiencing a long-known phenomenon called the ideomotor effect.

Basically, the ideomotor effect is subconscious, involuntary movement; scientists first documented it in 1852. “You often accidentally move a little bit if you think about a movement,” says Marc Andersen, an assistant professor at the Interacting Minds Centre at Denmark’s Aarhus University. “If you think about kissing your partner, for instance, you're inclined to just lean a little bit forward without really thinking about it.” The same force is at work with Ouija boards: Participants think about the planchette moving, so they subconsciously move it themselves.

But the movement of the planchette is only part of the Ouija board’s mystery. What about the messages? Our subconscious minds are responsible for those too. “Once it starts to spell something, inevitably, you're trying to guess, even if you're not doing it consciously,” says French. “If you ask, ‘What's your name?’ and it goes to the letter p, and then e, you're automatically thinking ‘Peter.’ Probably everybody else around the board is also thinking ‘Peter.’ And that's what is likely to be then spelt out.”

Andersen published a study in 2018 looking at how these predictions play out in Ouija sessions. His team asked participants to wear goggles outfitted with cameras to track their eye movement. As a control, the participants were asked to spell the word “Baltimore” using the planchette; their eye movement neatly anticipated the planchette’s trajectory across the board as they looked at the letter where they were moving it.

The participants then were asked to use the Ouija board normally, asking questions they came up with. In this part of the study, the individual participants weren’t as good at looking at and predicting the next letter. But when the two participants’ eye movements were analyzed together, they tended to be about as good at predicting the next letter as they had been when spelling Baltimore. Often, “if you look at two people,” says Andersen, “one of them will have predicted the letter.”

Typically, he says, “the first letter is more likely to be random, and then it becomes less and less random, so the likelihood that one of the participants can start predicting becomes much higher.”

However, even if they’re subconsciously guiding the planchette, Ouija users tend to feel a lack of agency — they don’t feel like they’re in control of its movement. “One of the things that determines your sense of control of something is that you can predict the consequences of your own actions,” says Andersen. The individual participants weren’t great at predicting where the planchette will go, so they still felt like a mysterious force beyond their control was moving it.

Some Ouija board users have also reported that the board communicated things it shouldn’t have been able to know, like facts that the participants themselves didn’t even remember. A 2012 study suggests that this might be attributable to subconscious memory. In the study, participants used a Ouija board to answer yes-no trivia questions. Unbeknownst to them, each participant was flying solo: They were blindfolded, and their partner was part of the research team and took their hand off the planchette so that the participant was manipulating it alone. When faced with a question to which they weren’t confident in the answer, participants guessed more correctly when they were supposedly receiving the answer from the Ouija board than when they were just answering the trivia questions themselves.

Ronald Rensink, an associate professor of psychology and computer science at the University of British Columbia and one of the authors of the 2012 trivia study, says that the study’s results might hint at the power of our subconscious minds.

What Ouija Boards Can Tell Us

While Ouija boards might not let us communicate with the dead, there’s a whole world of psychological insights that Ouija boards can provide. Our experiences with them can help scientists better understand subconscious memory, our sense of agency and the “zombie brain” that takes over when we do mundane tasks. Before studying Ouija boards, Rensink worked for an automotive company, analyzing the way that people sometimes go into autopilot when driving.

“You’ve got your conscious mind, which kind of sets goals and tells the zombie system what to do,” he says. “Once you’re on the freeway, your zombie system can handle that.” Rensink suspects a link between automatic driving and the subconscious mind that comes out to play with a Ouija board: “This may be what’s behind Ouija, that there is an intelligence there, and that might be that intelligence that’s driving your car.”

Rensink says that he’s hopeful for more discoveries to come out of the science behind things like Ouija boards and magic tricks that have historically been dismissed as hokum. “We're actually beginning to begin to understand a little bit about the purpose of consciousness, or the other system,” he says. “We didn't even know to ask that question 20 years ago.”

The popularity of Ouija boards can also give us insights into why people seek out experiences that scare them. Andersen, who studies recreational fear, says that spooky entertainment “may have a lot of positive effects on your ability to cope with fear going forward.” And society’s persistent interest in communicating with the dead tells us something about our relationship with mortality and our willingness to suspend disbelief when it comes to contacting people we’ve lost.

Ultimately, there is something strange and mysterious behind Ouija boards: our own minds.