People Often Blamed And Executed Witches For Plague And Disease

For many centuries, disease outbreaks and unexpected deaths were attributed to sorcery. This led to the death of many witches, who still face lingering harassment, attacks and stigma today. 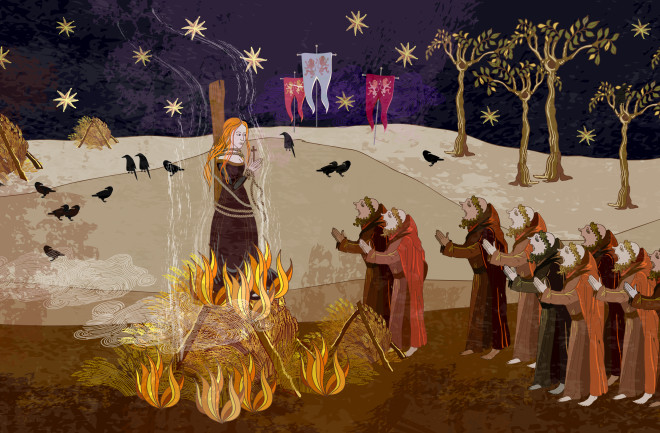 The early 1540s were tough times to be a resident of Geneva, Switzerland. The region endured several years of famine, then a resurgence of the Bubonic Plague. But it was especially hard on local witches.

City officials suspected sorcery was to blame for all the bad fortune, and they launched a campaign to identify and arrest sorcerers and witches. Religious leaders agreed with the superstitious prognosis. In a letter, Protestant reformer John Calvin described a three-year “conspiracy” to “spread the plague” through sorcery. Over the course of three-months, 34 people were executed for witchcraft. The women were burnt at the stake, and Calvin noted the men were “punished more severely.”

History has since proven that this post-plague witch hunt in Geneva wasn’t unique. For centuries past, and especially the Middle Ages, it wasn’t hard for authorities to convict a person, particularly a woman, for witchcraft. Witches were the convenient scapegoat for outbreaks of infectious disease or ailments that physicians couldn’t diagnose.

After the Geneva plague in the early 1540s, the city gained a tough-on-crime reputation against witches. Lawmen from elsewhere in the Swiss confederation sought their advice on how to identify witches in their own cities who were thought to be spreading the plague and other diseases.

The plague haunted many parts of the world for centuries, and when that disease wasn’t raging, others were. Dysentery passed through contaminated food or drink, mosquitoes transmitted malaria, and viruses spread influenza and smallpox in ways that science could not yet explain.

Outbreaks of food poisoning were also attributed to witchcraft, while ergot was likely the real culprit. This type of fungus is known to have grown on grain during wet summers, and farmers unknowingly harvested it in the autumn, ground it up and sent it to storage. When consumed, ergotism poisoning could cause convulsions, hallucinations and other symptoms.

Communities that shared grain stores saw mass outbreaks of mania that continued until the supply was depleted. Although farmers eventually learned how to recognize the fungus, witches long took the blame, and some scholars have argued the toxin was responsible for the Salem Witch Trials.

Witches also took the blame for personal tragedies. When a person died unexpectedly, family and community members sometimes felt like they had witnessed a murder. They wanted justice, and blaming a witch gave them the satisfaction they demanded.

Though not all deaths were attributed to witches. High infant mortality meant people had the understanding that babies often died for other reasons. But sudden illnesses or the abrupt deaths of seemingly healthy adults prompted people to blame witches. This also applied to events such as cardiac arrest or brain aneurysm.

Physicians often agreed a death was the result of witchcraft. Some scholars have argued that medical practitioners conveniently blamed witchcraft when a patient’s disease or condition was past their ability to manage.

Of course, accusations of a witch-borne illness were also a way for people to seek revenge on enemies. In the 1590s in Warboy, England, several sisters accused the family next door of causing them physical harm through witchcraft. The accused — a couple and their daughter — were later hung for their supposed crimes. Historians argue the sisters’ father and uncle used their political connections to take down their enemies.

After the execution, the father and uncle published a pamphlet, The Most Strange and Admirable Discoveries of the Three Witches of Warboy, to justify their deadly campaign. The pamphlet became a how-to manual for anyone wanting to fake an illness and blame it on a witch. Copycats howled in pain, described hallucinations and named witches as responsible for their woes.

For a while, vomiting objects out of the mouth became a sure way to convince others a witch was at work. Fakers later admitted to placing the objects like pins in their mouth and waiting for the right audience to spit it up.

Such frauds helped authorities eventually doubt witchcraft accusations in many parts of the world. And advancements in science helped neurologists explain that conditions like epilepsy were not a tell-tale sign a person was a witch.

Fears of witchcraft, however, still persist around the globe. The United Nations Refugee Agency estimates that thousands of accused witches are murdered each year, and millions more face harassment.

Women are primarily the target of witch allegations, and children fall victim to accusations of being possessed. Attacks on suspected witches are thought to be increasing, and in 2021 the United Nations’ Human Rights Council passed a resolution calling for an end to the violence.