A new finding on star-shaped cells called astrocytes could lead to future treatments for conditions such as Alzheimer's and schizophrenia. 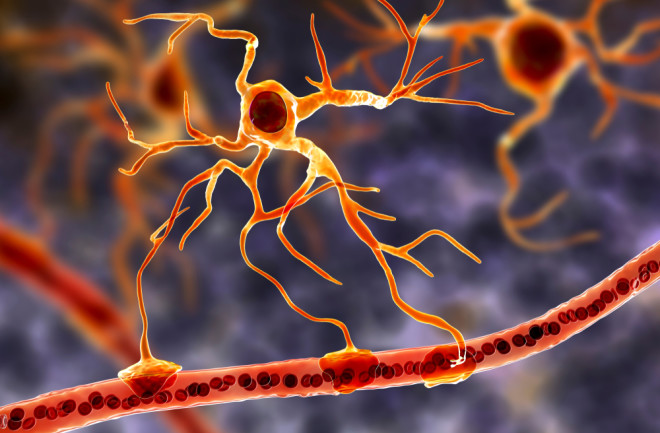 After his grandfather suffered a spinal cord injury in a car accident, Chris Dulla wondered how his wounded brain cells would repair themselves. So when Dulla learned in medical school two decades ago that star-shaped brain cells called astrocytes support neurons and play a vital role in injury response and recovery, he felt the urge to dive deeper into the topic.

Dulla, who is currently an associate professor of neuroscience at Tufts University, has now discovered a fundamental characteristic of these cells that may transform our understanding of the brain. The recent research suggests that astrocytes don’t just serve as support structures as scientists previously thought. Instead, they are electrically active and in constant communication with neurons, as Dulla and colleagues reported in a Nature Neuroscience study. This finding could lead to innovative treatments for conditions like schizophrenia and Alzheimer’s disease.

Astrocytes are an abundant group of brain cells that outnumber neurons by over five folds. Studies have revealed that in addition to supporting neurons, they also regulate neurotransmitters, respond to injury and help the brain heal.

Previously, astrocytes were considered electrically neutral. Researchers thought astrocytes depolarize (or become electrically active due to an increased flow of positive ions) exclusively in extreme situations such as during a seizure or traumatic brain injury.

But sometimes, “the most exciting things come from data that don't make any sense,” says Dulla. His team encountered such a scenario a few years ago when they were studying a neurotransmitter called glutamate, which is a naturally occurring molecule that neurons use to send signals to other cells. They found that during neuronal activity, the removal of glutamate molecules from the nerve terminals occurred very slowly.

This observation didn’t make much sense. The brain has plenty of glutamate transporter molecules, Dulla says, which can carry an almost infinite amount of the neurotransmitter. Something was interfering with glutamate transporter molecules, but it wasn’t clear what. Later, his team’s work hinted at a possible explanation: Perhaps astrocytes are electrically active. “But at that time, there were no tools to ask that question,” he says.

New Tools to the Rescue

So Dulla and his team got creative. They injected a mouse's brain with a virus they had designed to infect the astrocytes and trigger a fluorescent protein. That protein shifted its brightness when the astrocytes became depolarized.

Researchers dissected the brain, kept it alive in a dish, and sliced it into thin sections that could still receive nutrients and oxygen. The team then focused a microscope on a slice, lit it up, and took pictures of the astrocyte to observe changes in the fluorescent protein’s brightness. By analyzing changes in light and brightness, they could measure the electrical activity of the astrocytes.

The paper’s finding — that astrocytes are indeed electrically active — has revealed a new way in which neurons and astrocytes converse. “This has been a really fun experiment and finding for us because it opens a whole new avenue in understanding brain functioning,” Dulla says.

Astrocytes operate as a network system that can be compared to a power grid with identical voltages. Variation in voltages (or a lack of it) within an astrocyte network can also explain the basic and advanced levels of brain function. “The technical breakthrough made in this paper, through the use of innovative tools [...] confirms past speculations,” says Min Zhou, a neuroscientist at Ohio State University.

When astrocytes depolarize, they can activate other proteins. But so far, researchers never really considered that possibility because they didn't think astrocytes could do so in the first place. “So now that we know, it makes us kind of go back and revisit ways that they're affected by electrical activity,” Dulla says.

When astrocytes depolarize, they inhibit glutamate transporters and therefore increase  glutamate levels. Relatively high concentrations of the substance are common in various neurological diseases such as Alzheimer's, traumatic brain injury, epilepsy and schizophrenia. “So we're trying to identify new drugs that increase glutamate uptake and enhance astrocytes’ ability to clear glutamate,” Dulla explains. “And there hasn't been a lot of progress made in that field because we think we don't understand basic biology.”

The strength of connections called synapses between neurons is associated with learning and memory. Each astrocyte is in contact with over 100,000 synapses, says Koh Wuhyun, a neuroscientist at the Institute for Basic Science, South Korea, who was not involved in the current research. In fact, previous experiments in mice have suggested that astrocytes shape cognitive abilities, spatial learning and memory formation.

Researchers suspect that this new research may also lead to treatments that can improve learning ability, since astrocytes and neuron communication systems may play a crucial role in this process. “So, if you can make astrocytes and neurons talk more closely, quickly, or accurately, then you may [even] make the brain learn better,” Dulla says.