What’s The Genetic Link To Stuttering?

Stuttering impacts 1 percent of the population in the U.S., but we still don’t know much about what causes it. New genetic studies could explain why. 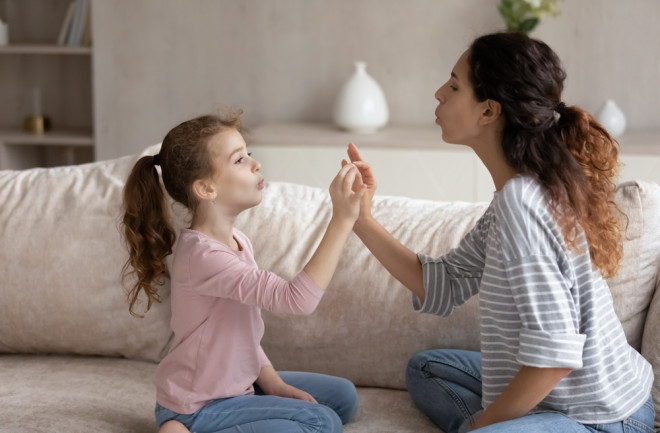 In 1939, a young psychology student from Iowa named Mary Tudor began the research project, “Monster Study.” Tudor's supervisor, Wendell Johnson, had a theory that the reason why some people stutter is that at some point in their childhood, someone had made them too self-aware of their own speech, causing them distress and impairing their fluency.

If Johnson was right, stuttering would be an acquired trait. To test his hypothesis, Tudor ran an experiment with a group of children from a nearby orphanage.

The “Monster Study” did not find any evidence to support Wendell’s theory, but it caused long-term trauma to many of their participants, particularly the children who could speak clearly but were told their speech was not normal to try to provoke stuttering.

This experiment shows just how little we knew, until recently, about a condition that reportedly affects 1 percent of the U.S. population. People who stutter can experience more depression symptoms and face a decreased quality of life. Despite this, there’s no available treatment at the moment. And we are only beginning to understand the causes of stuttering.

A Genetic Basis for Stuttering

In the last few decades, studies on twin siblings have shown that stuttering has a strong genetic basis. But other factors may also come into play.

“The power of genetics is that it's agnostic,” says Drayna. “You can find the causative gene that causes the disorder with no other information on cell biology or pathology.”

To make this connection, Drayna and collaborators analyzed large families who came from the same ancestor and had members who stuttered in Cameroon, Brazil and Pakistan.

When analyzing the DNA of these families, they connected four genes to stuttering: GNPTAB, GNPTG, NAGPA and AP4E1. All of these genes encode proteins in the same biochemical process, which controls the recycling of damaged components in the cells and is present in most body cell types.

But these genes are known for other reasons, too. Mutations that completely shutdown GNPTAB, GNPTG or AP4E1 cause rare, severe and often fatal diseases. But in the case of stuttering, the proteins codified by the mutated genes retain some of their function. People carrying these mutations are perfectly healthy and have no other symptoms, other than stuttering.

It is currently not clear how these biochemical pathway changes can produce stuttering without affecting any other functions. But in recent years, scientists have created genetically-engineered mice with the same stuttering mutations in the GNPTAB gene as the ones seen in humans.

While mice don’t speak like humans, they do emit high-frequency vocalizations that are inaudible to us. Scientists have studied mice pups that produce specific sounds when they are separated from their mothers during their first two weeks of life.

In their studies, researchers saw that pups with these mutations emit vocalizations with gaps and pauses in a similar way to people who stutter. The mutations only caused changes in speech fluency. Other than that, the animals were perfectly healthy and indistinguishable from non-mutant mice.

When the scientists analyzed the brains of these mice, they found fewer astrocytes, a type of cell in the central nervous system. This reduction was evident in a region called corpus callosum, which connects the right and left brain hemispheres.

The finding supports the hypothesis that the cause of stuttering lies in the delays in communication between different parts of the brain.

Despite these studies, mutations in these four genes only explain between 12 and 20 percent of stuttering cases. While scientists are looking to identify other genes connected to stuttering in the coming years, some have already emerged.

Last year, data mining from medical records revealed two genes were connected to stuttering. The function of these genes, ZMAT4 and FAM49, is currently not clear, but both of them are expressed in the basal ganglia — a brain area that coordinates movement and has been previously linked to stuttering.

“Stuttering is complex and thus the genetic profile of stuttering is also complex,” says Shelly Jo Kraft, director of the Behavior, Speech & Genetics Lab at Wayne University, who was involved in the finding of these two genes.

Kraft says that each person stutters in a unique way, with a distinctive pattern of repetitions, blocks and prolongations. She also notes that other traits affect speech fluency, such as the ability to cope with stress. This means that genes that control other personality features can also influence stuttering. Still on the lookout for more genes, Kraft believes that the time is ripe for advancing our knowledge in the genetics of stuttering.

“We are in a place in history where technology has met with our needs as a society. Thanks to that, we can overcome stigma and misinformation,” says Kraft.

More From Discover
Technology
What Is a Social Media Cleanse?
Mind
Calming Kids With Electronics May Affect Emotion Regulation Skills
Mind
What Psilocybin Psychedelic Mushrooms Are Teaching Us About Human Consciousness
Mind
How Failing Could Actually Help us Succeed
Mind
Can Playing Video Games Make You Smarter?
Mind
What Is Emotional Blunting, and Do Antidepressants Cause It?
Recommendations From Our Store
My Science ShopDiscover STEM Kits
My Science ShopDiscover 2022 Calendar
My Science ShopStrange Science
My Science ShopElements Flashcards
Shop Now
Stay Curious
Join
Our List