Here's how art conservators use a variety of tools, like X-ray fluorescence, ultraviolet light and infrared light, to peel back the layers of a painting, including an early work by Vincent van Gogh. 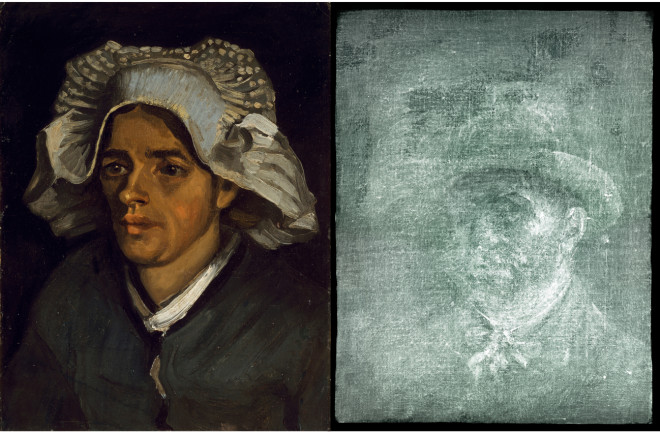 Head of a Peasant Woman, a painting from an earlier period in Vincent van Gogh’s career, depicts a local woman from a town in the south of the Netherlands. It’s there — where Van Gogh lived from 1883 to 1885 — that he carefully immortalized her facial features and simple clothes in oil paints.

But on the flip side of the work, hidden behind layers of glue and cardboard, is another painting: a bearded man in a brimmed hat and loose handkerchief. His stare is unyielding and although the right side of his face is in shadow, his left ear is clearly visible.

Art conservators at the National Galleries of Scotland discovered the mysterious image in July using X-rays, as part of a routine examination. They speculate that Van Gogh, who often reused his canvases to save money, created the work after Head of a Peasant Woman; instead of painting over earlier works, like some painters, he would flip the canvas over and work on the reverse. It is likely that this is the impressionist artist’s oldest self-portrait yet known.

“[This is] an amazing — potentially truly groundbreaking — discovery, because now a whole generation of art historians will need to figure out how this new self-portrait fits within the canon,” says Francesca Casadio, a founder of the scientific research laboratory at the Art Institute of Chicago who was not involved in the work.

Art historians and conservators have utilized X-rays in this fashion almost as long as we’ve been aware of their existence, she adds. In fact, this scientific approach to studying works of art has been well-established in both museums and academia since around the late 19th and early 20th centuries.

“Scientists like me use the tools of science to interrogate materials, and these materials happen to be works of art,” Casadio explains. “The best way that we can engage with humanities professionals or conservators and curators is with those scientific techniques that produce images; because then we have a shared language.”

In the world of art conservation, paintings may be X-rayed for a variety of reasons. As in the case of Head of a Peasant Woman, for example, such analyses may take place prior to an exhibition. If conservators are preparing a painting for treatment and there are questions regarding its structural integrity, it may also be X-rayed. And sometimes, when a museum acquires a work of art, the seller may allow this type of non-invasive investigation.

Read More: How Science Is Saving van Gogh's Flowers Before They Fade Away

Non-invasive is the key word here. “There’s still radiation that the painting is exposed to,” Casadio explains. “However, it's not of an intensity that can cause significant changes to the materials themselves.”

There are other methods of non-invasive interrogation that scientists like Casadio utilize, including X-ray fluorescence, ultraviolet light and infrared light. Basically, these different wavelengths from across the electromagnetic spectrum penetrate different depths of a painting. Researchers then use these methods in complementary fashion.

X-rays excel at imaging dense or heavy materials. That’s why they’re used to peer inside the human body when something isn’t right: Dense bone and even tumors absorb much more of the radiation than soft tissues do, and so appear white. X-rays also go through the whole painting, all the way from the varnish on top to the back of the canvas. Meanwhile, ultraviolet, or UV, light stops at the painting’s surface. But it can be a very powerful tool to identify areas that require restoration, says Casadio.

Like X-rays, infrared waves penetrate both the varnish and paint layers, but everything that has carbon in it — including the charcoal or graphite that artists used to sketch a composition — will absorb them. That means, explains Casadio, that researchers can scan a painting in the infrared if they want to reveal any underdrawings.

In some areas, art historians have been able to determine one art school or workshop from another based purely on an infrared image and the quality of these underdrawings. “Or, if you look at panel paintings in churches, sometimes you see the master writing notations for the workshop assistants,” she adds.

Then there’s X-ray fluorescence, which isn’t used to simply take an image. It records the reactions that atoms (specifically, their electrons) in a material have when exposed to X-ray radiation; because each element fluoresces in a different way, it allows researchers to identify a material’s chemical components. That, combined with art historians’ knowledge of pigments and paint-making, reveals plenty about both a piece of art and the artist who created it.

There are, of course, still limitations to these approaches. For one, explains Casadio, researchers are restricted in their ability to image organic material in an information-rich way. That becomes an issue when attempting to characterize the various binders that artists used to make their pigments stick to a surface — oil, glue, even egg.

“In the 19th and the 20th century, some artists were using mixtures of [these] materials because they were really interested in the surface and textural effects,” she says. “We’re very limited in how we're able to characterize those.”

Still, this type of work reveals new knowledge every day, which is then funneled to both scientists and humanists for interpretation. Casadio, who has in the past studied Van Gogh’s The Bedroom at the Art Institute of Chicago, appreciates the multi-disciplinary aspect of this collaboration. “Maybe a person doesn't care about Van Gogh, but thinks that it's cool to kind of peel the layer under a painting,” she says. “It's a way to reach people where they're at."

She hypothesizes that the researchers at the National Galleries of Scotland will attempt to scan the newly discovered Van Gogh using X-ray fluorescence to figure out some of its colors. It may also be possible to physically uncover the hidden self-portrait. Though the process of removing all that glue and cardboard, which experts believe were added for structural integrity in 1905 when Head of a Peasant Woman was lent to a major exhibition in Amsterdam, will require delicate hands.

Back of Head of a Peasant Woman. (Credit: Neil Hanna)

“I mean, every time you handle a work of art, there is a potential risk. But this is true also when you hang the painting for public enjoyment, when you put it out in the galleries so that activists can glue themselves [to it],” says Casadio.

Still, these types of unexpected discoveries have been made before. In 1929, the Dutch restorer Jan Cornelis Traas removed the cardboard from three paintings at the Van Gogh Museum in the Netherlands — revealing the portraits on their reverse.

Regardless, the latest find will go on display in Edinburgh this summer, beginning July 30, announced the National Galleries of Scotland in a press release. Visitors will be able to see the X-ray image for themselves for the first time, through a specially crafted lightbox at the center of the display.

“And the more we can see,” notes Casadio, “the more we will want to see.”