Victorian-era Books Bound in Emerald Green Are Laced With Arsenic

You may want to check your shelves — tens of thousands of books were bound in emerald green between the 1840s and 1860s and they're laced with arsenic, say conservators. 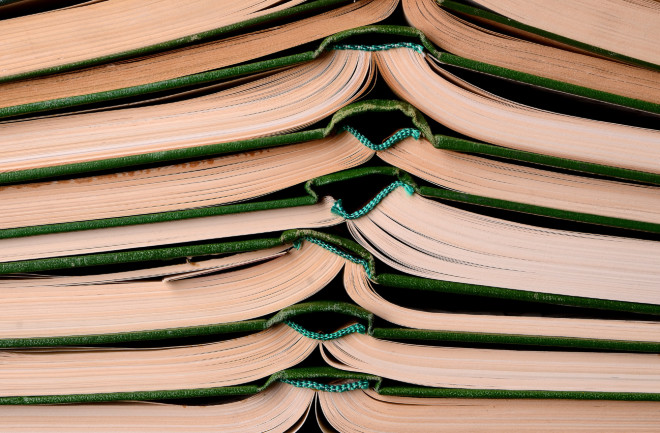 Nowadays, we tend to give arsenic a pretty wide berth — the element isn’t known as the “king of poisons” for nothing. Its toxicity stems from its similarity to the life-sustaining nutrient phosphorus, which allows arsenic to invade important chemical reactions in the body and disrupt them. The element is also happy to mix with other ones, often forming deadly and undetectable powders with no taste or smell.

Yet this versatility is what made arsenic so ubiquitous in a variety of Victorian-era products, from home decor and wallpaper to clothing and books. When combined with copper oxide and lime, it produced an eye-catching compound called copper acetoarsenite, or emerald green.

“At the time, emerald green was the most colorfast, brilliant green colorant available and it was a wildly popular color among consumers,” says Melissa Tedone, a conservator at the Winterthur Museum in Delaware. “No alternative dye could even come close to the intensity of the color.”

In bookbinding, its use as colorant allowed arsenic to spread far and wide. Because it was used at a time when manufacturers produced books in both large- and small-scale binderies with the help of machines, Tedone estimates that as many as tens of thousands of books were bound in emerald green between the 1840s and 1860s. (Our understanding of 19th-century bookmaking is limited, thanks to well-kept trade secrets.)

Although a series of accidental arsenic poisonings sparked debate over the substance’s safety toward the end of the era, she continues, it’s unlikely that manufacturers would have been quick to give up the hue as long as there was strong demand for it.

So, in 2019, Tedone and her colleagues began testing hundreds of books from Winterthur and the Library Company of Philadelphia. About half of these contained lead; some others revealed different heavy metals, such as chromium and mercury. But just over 10 percent were found to contain arsenic-laced emerald green — a much larger health risk to librarians, collectors and researchers. That hazard is not only due to arsenic's toxicity, but because the powder tends to flake easily from a binding and into the air when disturbed.

“The arsenic offset is invisible to the naked eye,” explains Tedone, “so a person handling an arsenical book wouldn’t necessarily see any green pigment offsetting onto their hands or other surfaces.”

Read More: Why Arsenic Poisoning is More Than a Murder Mystery Trope

In response, the conservators kickstarted the Poison Book Project, an “ongoing investigation to explore the materiality of Victorian-era publishers’ bindings.” They use a number of non-destructive analytical techniques to identify arsenical books without causing damage to them: When X-ray fluorescence spectroscopy detects arsenic and copper together, a second method called Raman spectroscopy can confirm the presence of emerald green.

“It’s an important part of cultural heritage work to analyze and better understand the collections for which we care,” says Tedone, lead conservator of the Poison Book Project. “However, we definitely don't want to damage those materials in the name of research!”

More recently, the project expanded to include crowd-sourced data. Thanks to the work of researchers from more than a dozen other institutions and private collections, 101 arsenical books have so far been identified, Tedone says. To help in the tremendous undertaking, the Poison Book Project distributes bookmarks with safety warnings and images of various emerald green colors. As of August, the project had distributed more than 1,500 bookmarks to 49 states and 19 countries around the world.

While nothing short of consuming an entire toxic tome would lead to a serious case of arsenic poisoning, exposure to copper acetoarsenite particles can still irritate the eyes, nose and throat. For librarians and researchers, repeated interactions may cause more serious internal symptoms such as dizziness and nausea. For these reasons, if you suspect you might be handling a Victorian-era book bound in emerald green, make sure to wear nitrile gloves, avoid touching your face and wipe down all surfaces after you are done. Then, consider requesting a color swatch bookmark just to be sure!