Totality Touches The Moon During The Lunar Eclipse

In 2022, it’s worth getting up early Nov. 8 to see the Moon slide into Earth’s shadow. It's even safe to look at the Blood Moon's deep orange-red color during the lunar eclipse. 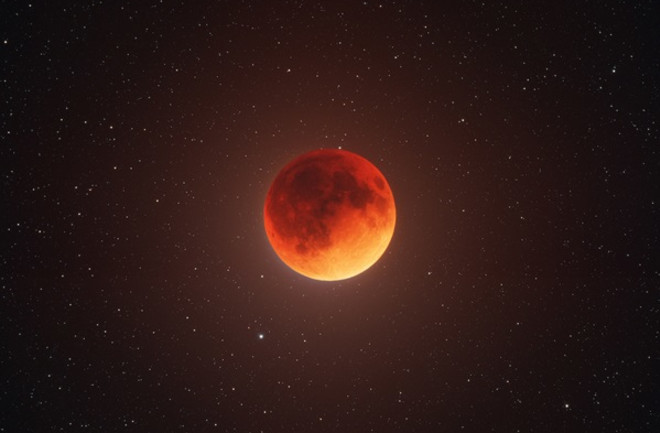 During totality, the eclipsed Moon takes on red or orange hues. Each eclipse is a little different; this stunning photo was captured from El Sauce Observatory in Chile in May 2022 using a 61-megapixel QHY600 camera and Skywatcher 3-inch (80 millimeters) telescope. (Credit: Matt Dieterich)

We can probably classify an eclipse of the Moon as the least stressful of astronomical events: Total lunar eclipses are both easy and fun to watch. And one arrives for the continental U.S. in the early morning hours of Tuesday, Nov. 8.

Observers throughout the country will see at least part of the event, but favored locations lie to the west. The next total lunar eclipse visible from the U.S. won’t be until March 14, 2025.

The Nov. 8 eclipse lasts nearly six hours, requires no equipment to see, and you can stare at it all you want. You won’t even need a filter — what you’re looking at is Earth’s shadow moving across the Moon’s surface. Any observer on our planet’s nightside with a clear sky will see the dramatic progression as the shadow slides along, ultimately turning our satellite a deep orange-red.

A partially eclipsed Super Moon hangs in the starry sky near Marion, Iowa, May 15, 2022. This 2.5-second exposure was captured 21 minutes before maximum eclipse. (Credit: Gregg Alliss)

November 2022 Lunar Eclipse: What Time and Where?

After totality, things play out in reverse. The partial phase ends at 7:49:03 A.M. and the Moon exits the penumbra, marking the end of the eclipse, at 8:56:08 A.M. Just slightly less than 3 hours 40 minutes elapses from the start of the partial phase until its end. What’s more important, totality lasts a worthy 1 hour 25 minutes. The longest possible duration of totality during a lunar eclipse is 1 hour 46.6 minutes. So, the one on Nov. 8 stacks up pretty well.

The entire eclipse will be visible to much of the world, excluding Africa and much of Europe. Northwestern parts of South America will see some totality, but the finest views come in Asia, Australia, and North America. In the continental U.S., everyone with a clear sky will experience at least part of totality, and those who position themselves as far west as possible will have the best views. The “worst” U.S. views will come in eastern Maine, and even there, observers will witness more than an hour of totality.

Rate the Darkness of the Moon During Totality

The Moon looks different from one totality to the next because it takes different paths through Earth’s shadow. Sometimes it passes close to the center and sometimes it crosses the outskirts. The more central the path, the darker the Moon’s surface will get, especially around mid-eclipse. So, when totality arrives, be sure to look for the difference in brightness between the northern and southern edges.

Totality on Nov. 8 doesn’t reach the longest possible duration, because only the Moon’s southern edge touches the center of our planet’s umbra. You’ll easily see that the Moon’s southern half looks darker than its northern half. Because the Moon crosses a large range of the shadow’s depth throughout totality, the appearance of its face will change significantly as the eclipse progresses.

Top: This composite shows the progression of phases during the brief May 26, 2021, lunar eclipse. The series was shot near Washpen Falls in New Zealand in dry, cold conditions. Bottom: The Danjon scale, created by André-Louis Danjon, allows observers to estimate the darkness of any given lunar totality. Take a look at the Moon during mid-totality. Which number on the scale does it match best? (Credit: Top: Ben (CC BY-ND 2.0); Bottom: Astronomy: Roen Kelly)

Our atmosphere also plays a big part in how the Moon appears. The air around us contains water droplets, dust, pollen, and ash. All these components reduce the air’s transparency. Storms and large amounts of clouds along the limb of our planet (from the Moon’s point of view) can make the lunar surface appear even darker.

One of the coolest effects during a total lunar eclipse is that the Moon doesn’t just darken — it also changes color. This happens because our atmosphere bends a bit of sunlight into the shadow and onto the Moon’s surface. And because the air around us scatters blue light the most (which is the reason a clear daytime sky is blue), the light that falls on the Moon is redder than normal sunlight.

Since lunar eclipses last on the order of hours, many observers use some of the time during totality to estimate how dark the event is. They do this using a scale developed in 1921 by French astronomer André-Louis Danjon. How you make this observation doesn’t matter. You can use your naked eyes, binoculars, or a telescope. Just be sure to make you estimate near the middle of totality.

This unique shot shows multiple phases of the May 2022 lunar eclipse, as seen from Mina de São Domingos in Alentejo, Portugal. It comprises three separate photographs: the orange-hued eclipsed Moon, the illuminated portion of the Moon before full eclipse, and the lunar terminator in detail. (Credit: Sérgio Conceição)

Danjon used the letter L for luminosity, the Moon’s brightness. For an eclipse where L = 0, the Moon nearly disappears at mid-totality. If L = 1, you’ll see the Moon, which will appear gray or brown, but details on its surface will be hard to identify. When L = 2, details are visible and our satellite takes on a deep red or rust color. L = 3 occurs when the Moon is a lighter shade of red. Also, you might notice that Earth’s shadow has a brighter edge, which may even look yellow. Finally, the brightest eclipses are when L = 4. During these, the Moon’s surface appears orange or copper and the shadow’s edge might look blue. Many amateur astronomers hope for an eclipse that rates a low Danjon number because of how dramatically different the sky looks at totality from when the event begins.

What Celestial Objects Will be Near the Lunar Eclipse?

This eclipse takes place in fall, so the traditional fall constellations lie opposite the Sun, surrounding the Full Moon. On the morning of Nov. 8, the Moon will be in Aries the Ram. Look for magnitude 2.0 Hamal (Alpha [α] Arietis) a bit more than 12° northwest (to the upper right) of the Moon. The nearest 1st-magnitude star to the Moon is magnitude 0.9 Aldebaran (Alpha Tauri), which lies 25° due east.

Observing the Pleiades (M45) throughout the first half of the eclipse will provide a nice diversion for observers. The sky’s brightest star cluster lies 15° northeast of the Moon. Take a look at it every five minutes or so, starting when the partial eclipse begins. Note how the Pleiades’ visibility changes as more and more of the lunar surface plunges into darkness. Although the stars will become easier to see with just your eyes, binoculars will provide a different (and probably more pronounced) perspective.

On Nov. 19, 2021, a partial (97 percent) lunar eclipse occurred with the Moon near the Pleiades in Taurus. Once again, our satellite will appear near this sparkling star cluster during an eclipse, with the Moon passing completely through Earth’s shadow this time. (Credit: Alan Dyer)

Both Mars and Jupiter will blaze nicely on either side of the Moon as the eclipse begins. The Red Planet, shining at magnitude –1.4, is 40° to the east-northeast, and the king of planets, Jove, still near its greatest brilliancy for the year at magnitude –2.8, lies 46° west-southwest of Luna. Unfortunately, the farther east you are located, the more likely it is that Jupiter will have set.

Looking at Lunar Eclipses is Safe

With an annular solar eclipse coming to the U.S. in 2023, followed six months later by a total solar eclipse, people promoting those events are stressing safety in viewing, and justifiably so. But while adequate eye protection is a legitimate concern during solar eclipses, a lunar eclipse poses no danger to your eyes. So, you won’t need a filter and you can even magnify the sight with binoculars or a telescope without worry.

Because this event occurs in the early morning on a Tuesday, people who work or go to school that day might skip it. Still, it may be fun to wake up and share a few minutes of totality with your family. Many astronomy clubs are already planning viewing parties for their members. Whether planetariums and science centers follow suit will likely depend on the state of the COVID-19 pandemic and any local restrictions.

Events like this are easy to observe and enjoy. You don’t need binoculars or a telescope, although either will enhance your view. You don’t need to travel to a dark site, though if your neighborhood is light-polluted, getting out of the city will let you see many more stars during totality. And you don’t even have to watch the whole eclipse. Many people bail once totality is over. However and wherever you watch, get comfortable, stay warm, and enjoy the sublime celestial geometry of a total lunar eclipse. Good luck!

This article was originally published on Astronomy.com.

6 Amazing Images From the James Webb Telescope in 2022

Why Do The Stars Look Pointy in Images From the James Webb Space Telescope?