Whether these cool cats are bionic, bioluminescent or have blasted into space, they deserve recognition on National Cat Day. 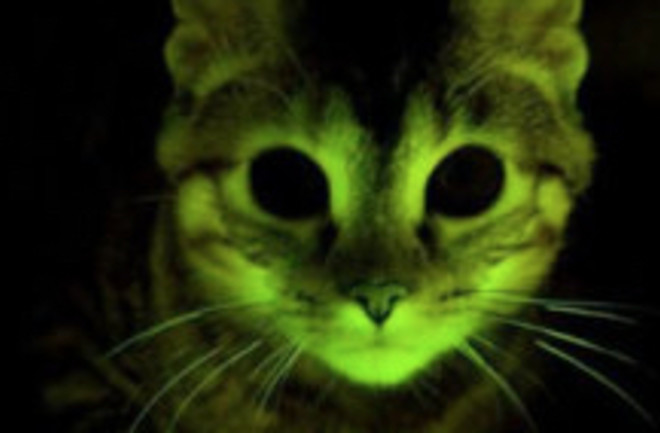 You don’t see a lot of cats headlining science news. Anonymous lab mice, Pavlov’s dogs, even Dolly the Sheep gets more recognition than most of the cats on this list. Yet every one of the pioneer pussycats featured here deserves to bask in their own shaft of sunlight upon the great bed of science. In honor of National Cat Day, we recognize these 5 cats.

It’s practically a natural law that if you write anything about science and cats, you have to mention Schrödinger’s Cat. Which is not an actual cat — indeed, there’s some doubt as to whether Erwin Schrödinger ever owned a cat. But the physicist and Nobel laureate did devise this thought experiment in 1935, which places a hypothetical cat in a hypothetical box in a hypothetical deathtrap situation where the cat could be said to be both dead and alive until it is directly observed.

When you think about it, it’s a pretty awful scenario to throw out there. (It must be said, however, that history has revealed Schrödinger to be pretty awful himself.) In the interest of historical accuracy, it’s worth noting that Schrödinger did not intend for people to take his live/dead cat scenario seriously. He proposed it as an absurdity, a criticism of then-current thinking regarding quantum theory. But that criticism has adopted a life (and death) of its own ever since. The important thing to remember is that no actual cat died in the making of this particular scenario.

More on Cats in Science:

Félicette, first and only cat to make it to space. (Credit: RonFrazier/CC BY-SA 2.0/Wikimedia Commons)

Since the dawn of rocket travel, various countries have sent just over 600 human beings into space, as well as more than 30 monkeys, a dozen or so dogs, scores of mice and fruit flies, and even a couple of tortoises. But only one cat has ever gone to space and back.

Plucked from the streets of Paris, this stray tuxedo cat was among 14 feline recruits trained for spaceflight by CNES (Centre national d’etudes spatiales), the French equivalent of NASA. These cat astronauts underwent many of the same rigorous tests as human candidates, but the Parisian stray made the cut.

On October 18, 1963, C 341 (the cat’s official designation) made her fateful journey into space, enduring 9.5 g’s — more than enough to knock a human out — and about five minutes of weightlessness.

But she made it back to earth safely and was for a time a star in the French press, which dubbed the cat “Felix,” after the famous cartoon chat. French authorities feminized it to Félicette and made the name official. Sadly, and to the shame of CNES, Félicette’s minders euthanized the intrepid kitty a few months later, to further study the physical and neurological effects of her flight. In 2019, Félicette was finally memorialized with a bronze statue, which now stands at the International Space University in Strasbourg.

Long at the forefront of animal cloning, Texas A&M’s College of Veterinary Medicine & Biomedical Sciences has produced genetic replicas of horses, pigs, goats and other critters. But back in 2001, they made history by bringing a literal copycat into the world.

The appropriately named CC, the planet’s first cloned cat, was the darling of researchers there. Created via nuclear transfer from the cells of Rainbow, a female shorthair cat who served as the donor, CC was herself a healthy genetic duplicate of Rainbow, although the two cats were not perfect lookalikes: Developmental variances gave the kitty clone a slightly different coloring and pattern on her coat.

A member of the faculty adopted CC, who lived a life of luxury in a custom-built kitty condo in her owner’s back yard. She even had a family of her own when she later gave birth (via natural methods) to three kittens. But CC’s extraordinary origins conferred no special longevity and in 2020 she died of kidney failure, at the respectable age of 18.

Anyone who has ever taken a picture of a cat or seen one in dim light knows that their eyes glow with a certain luminosity that makes them seem almost supernatural. But thanks to the intervention of science, it turns out that some rare cats can, in the right circumstances, produce a real glow-up. We’re talking full-on bioluminescence, the kind of thing you see in fireflies and jellyfish.

The first glow-in-the-dark cat was the aptly named Mr. Green Genes (a shout-out to a now-obscure children’s TV sidekick). In 2008, the New Orleans-based ginger cat had his genetic structure modified in an attempt to determine whether a foreign gene could be added to his biological makeup. The easiest way to test this, researchers decided, was to introduce green fluorescence protein (GFP), a gene associated with jellyfish that could be detected under ultraviolet light. It worked — and with no harm to the cat.

A few years later, the prestigious Mayo Clinic used a similar procedure to study feline AIDS, hoping to also shed light on human AIDS and other diseases. Researchers inserted a gene into cat egg cells that was known to block the feline AIDS infection. This was accompanied by the jellyfish gene — not for any therapeutic benefit, but to confirm that the gene transfer was successful. If cats born from those egg cells lit up when subjected to UV light, researchers knew the transfer worked. Again, the procedure did the cats no harm. It did, however, create a generation of aspiring pet owners, including some members of the Discover staff, who wanted to know how they could get their own incandescent kitty.

In 2009, a black cat named Oscar was extremely unlucky. His idyllic life on the Channel Island of Jersey was interrupted in the most horrific way when he lost both of his back paws in a farming accident. That might have been the end for most pets, but Oscar’s luck changed when he was taken into the care of Noel Fitzpatrick, a veterinarian who specialized in orthopedics and neurosurgery.

Fitzpatrick performed a first-of-its-kind operation, implanting two custom-made devices known as intraosseous transcutaneous amputation prosthetics (ITAP). As Discover and other media reported at the time, ITAP technology meant that “skin from Oscar’s amputated legs can actually grow into the prostheses, like a deer’s skin grows into its antlers.”

Other animals have since benefitted from that successful surgery and ITAP has been explored as an option for human amputees. Meanwhile, Oscar became famous, featured on TV shows, documentaries, and as the subject of a 2013 book. Oscar, still hale and hearty, celebrated his 15th birthday in July of 2022.