Compared to other primates, human slumber is exceptionally short. Did it once give us an evolutionary advantage? 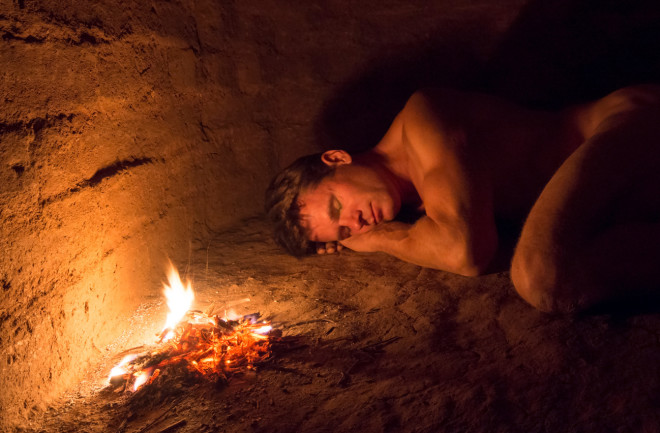 Human sleep is an anomaly among primates. Our closest relatives, the chimpanzees, sleep three hours more than the average person — on a mattress made of branches suspended in the canopy. Then there’s the mouse lemur, a pint-sized primate with gleaming saucers for eyes that’s so skilled at sleeping it lies unconscious for 17 hours each day.

David Samson, an assistant professor of anthropology at the University of Toronto Mississauga, has used sleep prediction analyses to estimate the sleep time of different primates. After accounting for factors such as brain size, degree of predation and metabolism, Samson and his colleagues can accurately predict how much sleep each species needs … just not for humans.

“Our models predict that humans should sleep 10.5 to 11 hours,” Samson says. But this is three to four hours more than the seven hours an average person clocks per night. Not only do we sleep far less than the average ape, we also spend a larger portion of that time in rapid eye movement (REM) sleep, the deepest sleep stage. Humans spend up to 25 percent of sleep in REM, the most of any primate, according to Samson.

Read More: The Importance of Sleep for Your Body

This fact is especially surprising when we consider the functions of sleep. A good night’s rest is associated with intelligence, better memory, improved problem solving, creativity and innovation — attributes we associate with what it means to be human.

To explain the discrepancy, Samson suggests that shorter, deeper sleep may have provided a survival advantage when sleeping on the ground. Compared to the treetops, terrestrial sleeping made Homo sapiens more vulnerable to predation. Sleeping intensely and in shorter stints meant that early humans received the refreshing benefits of sleep while being able to defend themselves.

However, too much deep sleep is dangerous. REM is the stage of sleep in which we experience dreams, so our muscles become paralyzed to avoid acting out these dreams. In his “social sleep hypothesis,” Samson suggests that our ancestors mitigated the risk of deep sleep by sleeping in large groups with at least one person on guard.

“Human camps are like a snail’s shell. They can pick it up and move it around with them,” Samson says. Our ancestral hunter-gatherers might have slept in groups of 15 to 20 around a campfire, taking turns staying awake and watching over the others.

The protection gained from sleeping socially allowed early humans to get a better night’s rest. As anyone who has dealt with a sleep-deprived child knows, better sleep makes us more amenable and facilitates social interaction. Building stronger relationships may have fostered more cooperative sleeping groups and improved sleep, in a soporific feedback loop.

Hints of the social sleeping behavior of our ancestors can be seen in our modern sleep patterns. A 2011 study found that people who are lonely experience more fragmented sleep than those who are more socially connected, an effect the authors attribute to a lack of security.

Other indirect evidence for the social sleep hypothesis comes from natural differences in the times we feel sleepy. These differences, or chronotypes, are what we colloquially refer to as being either a “night owl” or an “early bird.” Natural selection may have favored genetic differences in chronotype to increase the likelihood that at least one member of a sleep group was awake at any one time, according to Samson.

Only over the past few decades have anthropologists been able to take sleep studies out of the lab and into the field, thanks to the development of small wristwatch-like sensors that offer an alternative to the unwieldy electroencephalography (EEG) machines traditionally used. Samson and his colleagues collected much of their data on ancestral sleep patterns by observing the Hadza, a modern community of hunter-gatherers in Tanzania.

Measuring their sleep patterns over several weeks, the researchers discovered that it was surprisingly rare for all members of the community to sleep at the same time: it occurred for a total of only 18 minutes over a 20-day period. They also demonstrated that chronotype changes as we age, suggesting that groups composed of multiple generations likely had the greatest survival advantage.

Samson’s data suggest that the sleep of our hunter-gatherer forebears was flexible; they likely slept during both the day and night and took frequent naps. This approach to sleep may have enabled the migration of H. sapiens out of Africa and into regions with shorter winter days.

Although there is widespread support for Samson’s hypothesis among evolutionary sleep researchers, some believe it overlooks the role of kin selection. Biologist Gonçalo Faria, of the University of East Anglia in England, suggests that the role of the guard in ancestral groups was not shared equally. Instead, he theorizes that most of the burden fell upon men. This seemingly altruistic behavior could be explained by the fact that, when forming relationships, a woman left her own social group to join that of her partner. Because that left men more closely related to the other group members, it stands to reason they would be more invested in the group’s survival.

Our Dogs Do Manipulate Us, According to Science

Why Were Prehistoric Marine Reptiles So Huge?