Cooking a Turkey for Thanksgiving? Here's What To Do

Science can explain know how to choose the right turkey and how long to cook it for this Thanksgiving dinner. 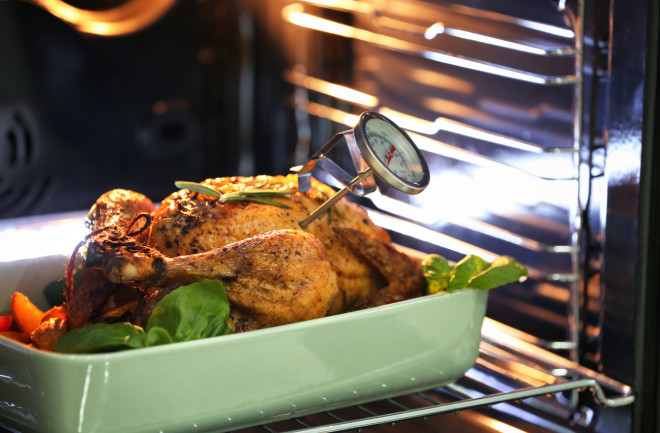 Each year, millions of Americans put their money, time and energy into preparing the perfect turkey. It’s the centerpiece of the Thanksgiving meal and an essential component of the holiday. Yet come mealtime, far too many of us are left with a bird that’s dull and dry — the uninspired second fiddle to the mashed potatoes, green bean casserole and pumpkin pie.

Most of us cook a turkey only once or twice a year, if that. In other words, we simply don’t get enough practice in to perfect it. This (coupled with the sometimes-clouded judgement rendered by alcohol) can make for a cooking calamity, but it doesn’t have to be this way. With a little preparation and some forethought, a juicy, delectable bird is a just a few chemical reactions away from reality.

The flavor of a turkey comes from all the little molecules that the animal has been exposed to during its life, says Peter Barham, a professor of physics at the University of Bristol in the U.K. and honorary professor of molecular gastronomy at the University of Copenhagen in Denmark. Choosing a higher-quality, free-range turkey is not only tastier, but it’s also more akin to what the pilgrims would have eaten 400 years ago.

“Meat itself has very little flavor,” Barham says. “Its flavor comes from the cooking method and through the amount of work the muscles do.” Free-range turkeys have a gamier flavor and more dark meat because they‘ve been living properly and utilizing their muscles. The more an animal moves during its life, the more myoglobin molecules, an oxygen-carrying protein that adds color and flavor to the bird, are present. Conventional birds only use their legs, which is why that’s (usually) the only part of the animal with dark meat.

And while we all love a leftover turkey sandwich, choosing a bird that’s wastefully enormous can also be problematic. If you get a turkey that’s too large, your oven may not operate in the way that it normally would because the big bird is blocking the heating element and preventing air movement. Typically, the larger the bird, the harder it is to cook, depending on the type of oven that you have.

“Circulating air carries heat around the oven to cook foods evenly and when it’s hindered your main course might turn out to be a disaster,” Barham says.

Start With a Dry Brine

Brining a turkey has become synonymous with proper bird preparation and there’s a scientific reason behind it. Salt adds flavor and pulls moisture into the meat through the processes of osmosis and diffusion. When you coat a bird with salt, you may notice that moisture appears on the skin within the first hour. The salt pulls water molecules to the surface of the bird in an effort to balance the amount of water and salt molecules there.

As time goes on, the salt moves from an area of high concentration — on the bird’s skin — to an area of lower concentration — inside its meat — through the process of diffusion. Water is first pulled to the skin because water molecules are smaller and move faster than salt molecules. Once the bird has had hours to absorb the salt, however, it begins to degrade and loosen the turkey’s protein strands. This makes it easier to absorb the water that previously moved to the skin and makes for a more flavorful and juicy bird.

A simple dry salt brine combines three tablespoons of kosher salt with one and a half teaspoons of dried herbs (like thyme, sage and rosemary) and three-quarters of a teaspoon of freshly ground black pepper for a 14- to 16-pound bird. Rub your defrosted turkey down 24 to 48 hours before cooking it.

One of the main reasons why turkey can be really dry is because ovens produce extremely dry heat, says Barham, which can dehydrate your meat and make it much less palatable. The solution? Basically, your bird needs a steam bath.

Placing an ovenproof bowl with about a cup’s worth of iced water beneath the turkey keeps it from drying out as it cooks. The ice allows it to last longer before it turns to steam. This turkey steam bath makes the oven humid and muggy rather than dry and dehydrated.

In any animal, muscles contract and relax as a result of activity. But once an animal is cooked, its meat is denatured and the muscles irreversibly contract. It’s this contraction, says Barham, that can cause problems. The higher the heat of the oven, the more contraction occurs. And the more contractions, the tougher the meat. That’s why the key is to go “low and slow,” says Barham.

But at the same time, the temperature must be high enough to melt away the tiny tendons, ligaments and connective tissue that also make the bird harder to chew. Slowly roasting at around 250 degrees Fahrenheit for multiple hours (around eight to 12, depending on the turkey’s size) allows your bird to fall within this narrow window of prime cooking.

Another idea is to butcher the turkey and cook its parts separately. For example, while the turkey breast is much tastier slow-roasted, the leg, which contains ample connective tissue and muscle can be cooked at a much higher temperature. Frying the legs, says Barham, is quite tasty and it’s OK for them to be cooked at the higher heat. It should be noted, however, that breaking down the turkey — a centerpiece of your Thanksgiving Day production — may be considered sacrilege for many families.

Great Balls of Fire: How Flames Behave in Space

More From Discover
Health
Is 'Expired' Milk Safe to Drink? Here's How to Know When to Throw Away Food
Health
How Saliva Changes The Flavor Of Food
The Sciences
The Domino Effects of a Global Food Shortage
Health
What Factors Matter Most For Weight Loss?
Health
4 Science-Backed Diets to Improve Your Health
Health
Beer Hops May Fend Off Alzheimer’s
Recommendations From Our Store
My Science ShopDiscover STEM Kits
My Science ShopDiscover 2022 Calendar
My Science ShopStrange Science
My Science ShopElements Flashcards
Shop Now
Stay Curious
Join
Our List