Stone Toolmaking May Not Have Required Cultural Transmission

Scientists have long pointed to excavated stone tools as evidence that early humans passed down their culture. But new research is shaking up that understanding. 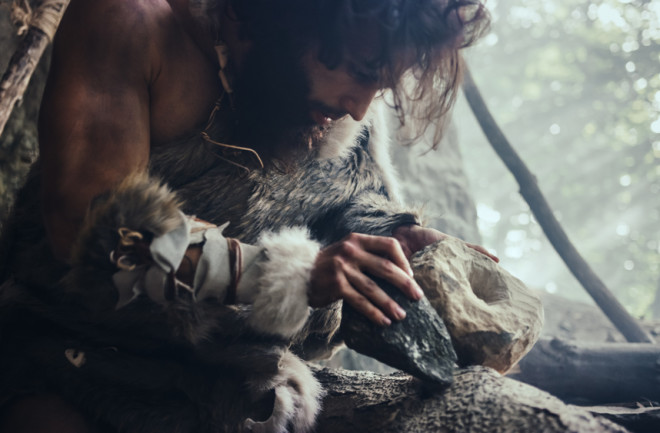 Modern humans around the world have evolved to adapt to unique cultures: they speak different native languages, wear diverse clothing, celebrate varying traditions and craft distinct artifacts. These cultures are cumulative in nature — something that's passed on for generations, resulting in unique variations over time. It's long been assumed that the practice of accumulating culture and passing it down the line started some 2.6 million years ago, when humans first learned the skills to sharpen stones for toolmaking.

But new research is challenging that assumption. Researchers at the Eberhard Karls University of Tübingen in Germany have proposed that cumulative culture may not have begun with the emergence of simple stone tools, known as the Oldowan industry.  In actuality, it probably started much later, says cognitive archaeologist Claudio Tennie, the senior author of the recent Science study. The scientists suggest that the earliest techniques for making stone tools can be spontaneously reinvented, even without any form of cultural transmission.

That's because people are essentially blinded by the belief that stone tools are so complicated that most humans couldn't simply make them without guidance, says Tennie. “It’s like the saying: ‘If all you have is a hammer; everything looks like a nail’,” he continues. Similarly, excavated stone tools have long been used as evidence of cultural transmission because the model made sense to early anthropologists, and subsequent researchers never tested those assumptions. By contrast, Tennie and his colleagues didn’t rely on archaeological evidence as a proof. Instead, they opted for a unique experiment.

The researchers chose 28 participants without prior knowledge of stone toolmaking, who where then given four hours to open a puzzle box with a reward inside. But there was a twist — the reward could only be accessed by opening an interior door which was fastened shut with a rope. To solve the puzzle, the participants were provided with a set of strange tools including a granite block, a painted glass hemisphere and a river rock, which they could tinker with in any way they wanted.

Tennie and team quickly observed a common pattern: All of the participants attempted to cleave apart the rope fastening the door. They did this by crafting some sort of cutting edge from the provided materials, mostly falling within three techniques of toolmaking that would have looked pretty familiar to our ancestors millions of years ago.

One of the most common techniques saw participants place a glass core upon a granite block floor and use a river rock as a hammer to break away flakes with sharp edges from the block. Others tried another prehistory technique that involved hitting the outer edge of the glass core upon the block to create sharp edges. A few others tried a more hands-on approach — that is, literally using of both hands to hold a hammer stone and a core to craft cutting edges from the block.

Previously, Tennie and colleagues also carried out similar experiments with chimpanzees. But unlike humans, the chimps couldn’t spontaneously make sharp tools, even when they were provided the materials and motivation to do so.

“When we see artifacts, it's natural for us to simply assume that it must have come out of culture because humans are creatures that live and breathe in culture,” says John J. Shea, an anthropologist at Stony Brook University who was not involved in the new study. Shea says he's come across a lot of anecdotal evidence in his career to suggest that humans can simply make these tools, without any form of prior knowledge. “But the authors of this new study actually did a good experiment,” he adds, convincingly showing that one does not need to invoke culture, or cultural transmission, to explain such artifacts.

“That doesn't mean culture is off the table," adds Shea. "It just means it's not required to explain some of the patterns of the variation."

Going forward, research like this may help scientists better understand how culture might have evolved for other hominin species in past eras. “[They] were walking around on both legs, cutting up animal carcasses, making stone tools, and living in a wider range of habitats," Shea says. "So it's possible that these creatures have culture."