Shipwrecks, Volcanic Ash And Lost Cities Come To The Surface In Lake Mead

Volcanic ash that is 12 million years old, sunken ships and towns from a bygone era make their way to the surface as Lake Mead recedes. 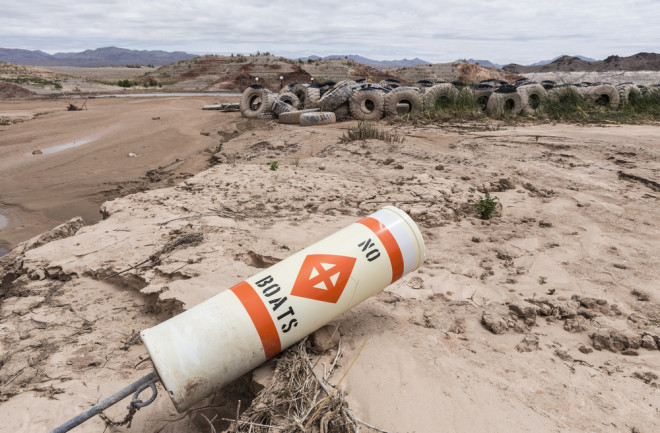 This article was originally published on August 12, 2022, but has been updated with recent information and findings.

It’s no secret the American South West has been experiencing one of the longest periods of drought in years. However, as Lake Mead — the largest man-made lake in the U.S. — dries up, more of its secrets are being discovered by citizens.

Lake Mead forms from the Hoover Dam on the Colorado River. It’s a reservoir that provides water for parts of California, Nevada and Arizona. Due to severe drought, the reservoir is at its lowest since 1937 when the lake was first filled. As of October 2022, the lake is at 1,045.67 feet, about 27 percent full capacity. When the lake is full, it sits at about 1,229 feet.

Lake Mead is considered the most dangerous national park site with over 250 deaths in the last decade. So it’s no surprise that human remains have been found as the water level drops. Due to its close proximity to Las Vegas, there is also a rumor that the mob used the lake as a way to discard bodies.

In the drying lake bed, sunken ships volcanic ash and lost cities have been discovered thus far. Here’s a closer look at what is found when waters recede.

While the low water levels remain problematic, scientists and researchers have been using this time to also study geological features that have surfaced during the megadrought, mainly volcanic ash.

Researchers from the University of Nevada Las Vegas (UNLV) Cryptotephra Laboratory for Archaeological and Geological Research (CLAGR) team have been studying the surfaced sedimentary rock along Lake Mead's dwindling shoreline. The sedimentary rocks — which haven't been seen since the 1930s — contain ash from volcanoes in Idaho, California and Wyoming. The ash likely cascaded down on this part of Nevada nearly 12 million years ago.

"Ash from even moderately explosive eruptions can travel hundreds of miles from the source, blanketing entire areas with anywhere from a centimeter to several meters of the heavy material," says Eugene Smith, a UNLV emeritus professor of geology, in a press release.

The research team also released a study suggesting that while the closest active volcanoes are a considerable distance from the Lake Mead area, eruptions could reach the area in the future. Volcanic ash, even just a few inches, can cause disastrous effects to powerlines, communication systems and roadways. Above all, the ash is extremely harmful to breathe in. The ash contains tiny fragments that can damage lung tissue and cause respiratory illnesses, like silicosis.

Researchers urge metropolitan areas like Las Vegas to have a plan for possible future eruptions that could cover the area in ash.

However, it’s also one of the most dangerous, especially if you’re taking a boat out. Lake Mead can go from pristine waters to white cap waves in an instant. High waves can tip and flood boats causing them to sink. Fluctuating water levels can bring hard-to-see rocks and debris closer to the surface and also cause vessels to sink.

As the water levels drop, it’s no surprise that several sunken boats have been discovered. Speed boats and fishing boats once submerged are now baking in the desert sun once again. One speed boat was even found sticking out of the mud vertically.

The Youtuber — Man + River was one of the first to explore the remains of what appears to be a yacht, or a houseboat, that seems to have sunk decades ago. There is no clear date of when it sank, but the items on board could have been from the 1970s to 1990s. However, more research is needed to determine the age of the vessel and the items on it.

Among the wreckage were kitchen utensils like forks, knives and cappuccino cups and saucers. The Youtuber also found rusted fire extinguishers, motors, a yachting flag still attached to the flag pole and a cassette tape.

However, one of the most interesting boats discovered was a World War II-era “Higgins boat” that is now partially exposed. The New Orleans-based Higgins Industries began manufacturing these vessels in the 1940s to help carry soldiers from ships to beaches during invasions. Soldiers used them on D-Day in Normandy.

According to Las Vegas Scuba, after the war, the Higgins craft was used to survey the Colorado River before it was sold to a marina and then sunk. Before the sharp water level drop, the ship was once a great site to scuba dive.

The area around St. Thomas, Nevada was once a Native American settlement. In 1865, Mormon settlers moved into the area and established St. Thomas. However, upon discovering they had not settled in Utah, they moved on from St. Thomas, burning their homes and abandoning their crops as they left.

New settlers moved in around the 1880s and rebuilt the town, adding a hotel, post office and school. The population peaked at around 500 people, however as the Hoover Dam project broke ground in 1931, St. Thomas residents were told to relocate.

The government provided compensation for their move and the last residents left in 1938. Eventually, St. Thomas was swallowed under 60 feet of water. Due to fluctuating water levels, in 2002 the ghost town was above the surface again and hikers can walk around the ruins of St. Thomas to this day.