How Physicists Are Using Quantum Computers to Hunt for Quantum Gravity

By simulating "wormhole-inspired teleportation", quantum computers are revealing new insights into the nature of reality 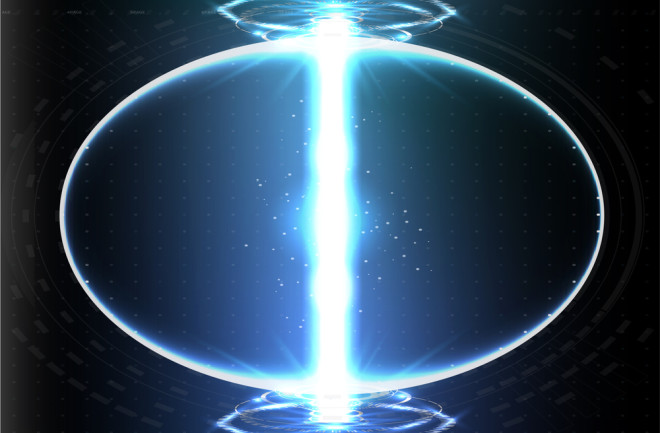 One of science’s great challenges is to reconcile the two theories that form the foundation of modern physics. These are quantum field theory, which governs the universe on the smallest scale, and general relativity, which governs the universe on the largest scale. Together these theories accurately describe phenomena over a forty order of magnitude range.

The question that befuddles researchers is: what happens where these theories overlap? In other words, how does gravity behave on a quantum scale? The answer — the nature of quantum gravity--eludes them because it is so subtle and its effect so small, that there is little prospect of observing it with current sensors.

But there is another way to play with quantum gravity: to simulate it on a quantum computer. Now physicists have begun efforts to perform such a simulation and, even though they have yet to simulate quantum gravity itself, they say that the process has revealed a new phenomenon: a way of transmitting classical information perfectly from a chaotic quantum system.

“This is a surprising result, since one does not expect strongly scrambling systems to be able to transmit classical bits,” say Illya Shapoval at the Lawrence Berkeley National Laboratory in California and colleagues.

Just as significant is that this new way of thinking about quantum gravity is surprisingly fruitful. “The process of developing a practical experimental protocol itself led to new theoretical insights into quantum dynamics,” they add.

The team’s approach builds on recent theoretical advances in understanding quantum gravity. The holographic principle is the idea that the three-dimensional reality we see around us is a hologram encoded in a distant two-dimensional surface.

In this theory, gravity emerges from the two-dimensional representation and this emergence creates a link between a type of quantum field theory called conformal field theory (CFT) and a variety of general relativity called Anti-de Sitter space (AdS).

Physicists call this AdS/CFT correspondence and it is their current best guess about the nature of quantum gravity. However, the potentially testable predictions from this theory are so subtle and on such a small scale that nobody has found a way to observe them, not least because AdS/CFT theories only work in universes that are significantly different from our own.

But they have found some promising avenues to investigate this theory further. One is to study the way quantum information flows between two black holes. It turns out that in these extreme conditions it is possible to teleport quantum information from one to the other; and that the experiment is analogous to the information passing through a wormhole between them.

This process of “wormhole-inspired teleportation” has generated much excitement among physicists because it ought to be testable in certain ways in our own universe. The results of these tests should throw new light on AdS/CFT correspondence and the nature of quantum gravity.

This is where the new work by Shapoval and co comes in. Although it is not possible to directly observe this phenomenon, “perhaps we can use quantum simulators and quantum computers to indirectly probe quantum gravity in the lab,” they suggest.

And that’s exactly what they‘ve done using two types of quantum computer. The first is the IBM Quantum facility of chip-based quantum computers based on superconducting transmons as qubits. This and allows calculations based on up to seven qubits. The second is a Quantinuum trapped ion quantum processor that can handle up to six qubits.

The team developed quantum software that could reproduce wormhole inspired teleportation on both quantum computers and then characterized the results. “We have designed and carried out “wormhole-inspired” many-body teleportation experiments on IBM and Quantinuum quantum processors and we observe a signal consistent with the predictions,” say Shapoval and co.

One result is that they were able to transmit a classical bit perfectly, even though the same system scrambles quantum information.

Just why this is possible isn’t clear. But it provides an avenue for further investigation. In particular, the researchers are curious whether this mechanism offers any advantage in transmitting information in this way. “Our findings raise new questions about potential regimes in AdS/CFT where traversable wormholes can transmit classical but not quantum data,” say the team.

This is just the beginning. The team have been careful to ensure that their approach is applicable to other quantum computers and will be scalable as these devices become more capable. While this approach does not measure quantum gravity directly, it should help physicists explore the experimental and theoretical architecture that could reveal it in future.

“The larger lesson is that the process of developing a practical experimental protocol itself led to new theoretical insights into quantum dynamics,” they say. “We conclude that we have likely reached a point where it becomes possible to obtain both qualitatively and quantitatively significant results from even more advanced experiments in this direction.”

That’s interesting work with profound implications, should it eventually provide testable evidence of quantum gravity and a route to uniting quantum field theory and general relativity. But even if it doesn’t the new ways of thinking about information it allows should provide physicists with plenty of food for thought.

Ref: Towards Quantum Gravity in the Lab on Quantum Processors : arxiv.org/abs/2205.14081