Optical Illusions Are Weirder Than You Think

What you see is what you get — but that’s not what’s actually out there. 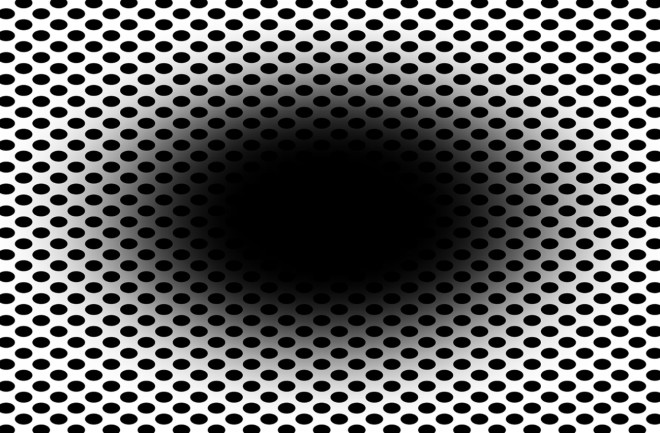 The "expanding hole illusion." (Credit: Frontiers in Human Neuroscience/CC by 4.0)

You’re probably familiar with plenty of optical illusions, from the Necker cube to the dress that broke the internet.

We’ve been discovering such illusions for hundreds of years; in fact, researchers at the University of Oslo recently discovered a particularly fascinating one. Dubbed “the expanding hole illusion,” this still image of a black hole seemingly grows over time — and it’s so powerful that 86 percent of those who experience the illusion experience pupil dilation in anticipation of reduced light.

Bruno Laeng, a professor in the university’s Department of Psychology and the first author of a study presenting the illusion, explained the phenomenon in a statement: “The pupil reacts to how we perceive light — even if this 'light' is imaginary like in the illusion — and not just to the amount of light energy that actually enters the eye.”

But what exactly is going on when the eyes trick the brain? Or to put it more accurately, what accounts for the disjunction between objective reality and our subjective experience of it? That’s a far more complicated question than it might seem at first pass.

Though we often think in terms of the eye versus the brain, the retina is actually part of the brain. Light enters the front of our eyes, then travels to photoreceptors at the back of the retina. It’s there that light is translated (or “transduced,” to use the technical term) into neural signals, explains Susana Martinez-Conde, director of the Laboratory of Integrative Neuroscience at SUNY Downstate Health Sciences University and one of the world’s leading experts on the neuroscience of vision.

But here’s the thing: The brain has only so much processing power. Though a huge amount of that is dedicated to vision, the brain still has to take some shortcuts. The organ must be just efficient enough to make sure we survive long enough to pass on our genes, nothing more. Therefore, the brain’s interpretation of sensory input has been refined over billions of years of evolution to get that right — not necessarily to nail the color of a dress on the internet.

Living in a Simulation

There’s never a perfect correspondence between objective reality and our experience of it, says Martinez-Conde. Basically, what we experience when we “see” something is the brain’s interpretation of sensory input.

Still, visual illusions are not errors of perception, says Martinez-Conde. In other words, they’re not places where the brain gets it wrong. “The way we perceive the world is different from the way a cat perceives the world or the way a bee perceives the world. You wouldn’t say that we got it right and they got it wrong or vice versa,” she adds.

Of course, discovering illusions is one thing; explaining them is another. There are hundreds, if not thousands, of documented illusions — far more than science has been able to explain.

It’s no surprise, then, that the neuroscience behind illusions lags behind their discovery, says Martinez-Conde. It’s not just a question of understanding how the phenomena work. In order to understand visual illusions, we need to know more about how vision works. Or, as she puts it, “if we knew how every single illusion works, we would have solved vision.”

Meanwhile, as neuroscientists work to solve vision, the rest of us can have some fun with growing holes and ambiguous dresses.