Neanderthals Were Probably Carnivorous, According To A Fossilized Tooth

The analysis of a fossilized tooth from Spain suggests that some members of Neanderthals rarely ate their veggies, if at all. 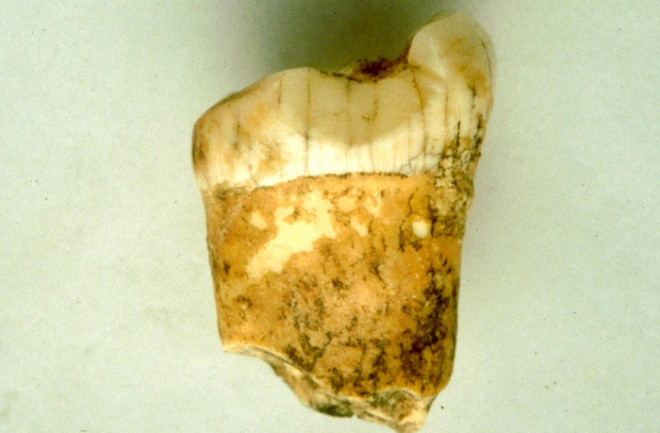 Scientists know a substantial amount about the Neanderthals. Our closest cousins were short, stocky and armed with an arsenal of physiological adaptations that protected them from the cold around 300,000 to 40,000 years ago. They were social, gathering in groups of 10 to 30 individuals, and they were innovative, chipping away at stones, stitching clothing, and trading tools and trinkets amongst themselves.

But there are some details that scientists still struggle to understand and one of them is the Neanderthal diet.

Now, researchers in a study published in PNAS developed a new method for determining the diet of Neanderthals — a chemical analysis of their tooth enamel. According to the authors, the method can be applied to single individuals from various time periods and locations and has already shown that one Neanderthal from the Iberian Peninsula consumed a strictly carnivorous diet.

Many scientists have studied the nutritional habits of the Neanderthals, but their attempts at describing the species’ diet have produced differing results. According to a press release, while several studies have shown that the species consumed plenty of plants, other scholarship suggests that the Neanderthals lived largely carnivorous lifestyles.

"Neanderthals’ diets are a topic of continued debate, especially since their disappearance has been frequently attributed to their subsistence strategy," the new study states. "There is no clear consensus on how variable their diets were in time and space."

To advance our knowledge around this ancient diet and its potential variations, the researchers devised a new technique to understand what the Neanderthals actually ate. Based off of existing methods that determine the diets of modern species, the new technique assesses the chemical composition of an individual Neanderthal’s tooth enamel to determine whether or not that individual was a carnivore.

Researchers applied the technique to the fossilized tooth of a Neanderthal from the Middle Paleolithic period in Spain, and found that the individual was completely carnivorous.

Scientists have long known that they can use the concentrations of chemicals within an ancient animal’s bones to determine whether that animal was a carnivore or a plant-consumer (whether an omnivore or a herbivore). That’s because the bones of these different types of animals aren’t made entirely equally. While carnivore bones tend to have a higher content of nitrogen isotopes, omnivore and herbivore bones typically contain lower levels of nitrogen.

Using these compositional thresholds to determine an animal’s diet works well with some samples of bone, but it doesn’t always bear fruit when bones are older. That's because nitrogen isotopes are susceptible to decay, making this sort of dietary analysis nearly impossible for samples over 50,000 years old — a contingent which includes the vast majority of Neanderthal specimens.

With these limitations in mind, the researchers decided to alter the method to work for Neanderthal remains. Instead of analyzing the composition of nitrogen in a Neanderthal’s bones, they opted to assess the concentrations of zinc isotopes within a Neanderthal’s tooth enamel, which can also reveal the differences between carnivores and other animals but resists all sorts of decay and degradation.

After testing the Neanderthal's tooth from Spain, the researchers found that the enamel had a low concentration of zinc isotopes, indicating that the individual ate meat, meat and more meat.

The researchers also tested their technique on an assortment of other animal specimens, both carnivorous and not carnivorous, from the same time period and area as the Neanderthal sample. Ultimately, they say that their technique can make determining the diet of ancient animals much simpler and can be used on other Neanderthal specimens in the future to produce a more complete picture of the species’ nutrition.