A new study compares the emerging field of gene synthesis to computation, which rapidly transformed labs and scientific fields. Could synthetic biology have a similar impact on our world? 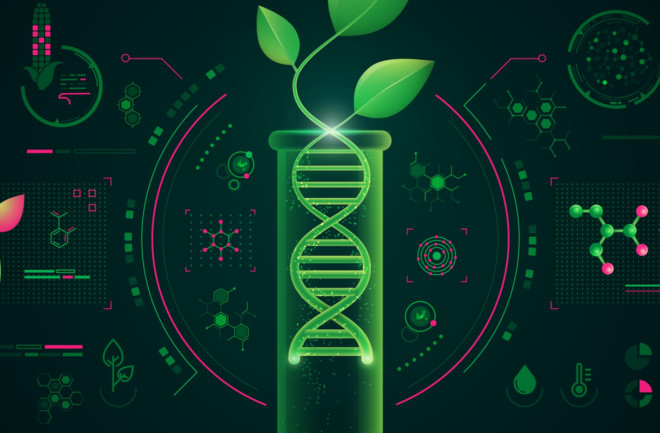 In a sense, all life as we have known it boils down to four letters: G, C, A and T. Organized in unique patterns and repetition, these nucleotides (guanine, cytosine, adenine and thymine) form all DNA. But, imagine if it wasn’t limited to four characters.

“What if the genetic alphabet had more letters? Would life with more letters be able to tell different stories, maybe even more interesting ones?” Floyd R. Romsberg asked on a TED stage 2018. The biotechnician at the Scripps Research Institute is among a growing group of people asking these types of questions while the cost of gene synthesis plummets.

Gene synthesis refers to the laboratory process of assembling genes from simple molecules without the use of template DNA. The assembled genes are generally made up of natural base pairs; but in recent years, researchers have also begun turning to new molecules (or unnatural base pairs) to synthesize functioning genes. The advances in gene synthesis over the past decade or so have been nothing short of science fiction-like. In fact, a quick Google search of “gene synthesis” reveals services for designing custom base pairs starting at less than 10 cents each.

A comparative study published in the Scientific Report in February analyzed the recent trend in synthetic biology, stating that the field is set to take over the globe by storm — similar, perhaps, to how computers changed scientific fields in the early 21st century. “Now you see heavy-duty computing in every science discipline," says Andrew J. Steckl, a computer engineering scientist at the University of Cincinnati and senior author of the new Scientific Report study. In the future, he says, "I see something similar happening in the world of synthetic biology and bioengineering because biology is [literally] everywhere."

The researchers in this study compared genomic and computation codes. They point out that, despite obvious differences in the respective fields, sets of codes are stored in restricted serial instructions in both of the systems, with four molecules (the A, G, T and C) coding for genomes and two digits (1 and 0) coding for computers. Genomic coding forms biological proteins while computation coding forms computer applications. Both of the systems have complex outcomes with varying functions when executed in sets of instructions. Researchers note that it is a good starting point for further thoughts and detailed discussions on this topic.

In 1975, Gordon Moore, a prominent computer engineer, made a unique observation studying the historical trend in the field of computational devices. He noticed that the use of transistors in computer circuits doubled every two years. As a result, people were paying less money yet getting highly efficient computers. This trend prediction was later established as Moore’s law. Researchers in the new study discuss that the trend of wide scale gene synthesis is also following the same trajectory.

In 2010, when Craig Venter and his team synthesized the genes of Mycoplasma mycoides(with just over 580,000 base pairs) and transplanted it into another bacterial host cell, it cost them nearly $40 million. Almost 12 years after that breakthrough, the average cost of synthesizing bacterial genomes with a few million base pairs comes in at around $4,000 today.

There are still many caveats when it comes to synthesizing complete human genomes, but projections show that cost won’t be a major hurdle. The new Scientific Report study suggests that even billions-of-base-pair-long human genomes could be synthesized for approximately a million dollars in 2022. And as the cost continues to shrink, the synthesis of genomes even for the largest and most complex living beings could come within easy reach for governments, commercial bodies or research organizations.

The Dawn of Gene Synthesis

These advances have been possible because of consistent research efforts from a number of researchers.

Har Gobind Khorana and colleagues for the first time synthesized a first complete gene in the early 1970s. In 2014, Romesberg and colleagues created and successfully inserted two additional stable base pairs into a living cell. Steven Benner and his team later on expanded the genetic alphabet to 8 letters, demonstrating how synthesized unnatural bases can recognize and bind to each other forming a stable double helix.

Researchers point out that easy and accessible gene synthesis will have transformative implications. It could help not only in designing individual cells but in shaping the overall functioning of microbes as a community, says Ophelia Venturelli, synthetic biologist at the University of Wisconsin-Madison, who was not involved in the latest study. “I think reduced cost can help in designing more experimental settings for enhancing microbial interaction systems,” she says. For a few years, Venturelli’s team has been working on reengineering the microbial community.

With synthetic biology, in the near future, it might be possible to design micro-organisms that can find cancer cells. The designed microbe could be programmed to secrete toxic proteins which would kill the cancer cells with precision and minimal side effects. “We can even create support communities for such engineered microbes that allow us to enhance microbial fitness so they can persist for the right amount of time to perform their function,” she says. And having cheaper gene synthesis can let us “design several sets of experiments and iterate that multiple times. This also lets us combine experimentation with computational modeling.”

Some researchers agree that the ability to create an artificial life does not necessarily give us the moral authority to do so. “What if people use it to design microbes that are as contagious as chicken pox and as deadly as Ebola, which spreads all over the world incubating for months and months before the first sign of trouble?” asked Rob Reid, a futurist and author of The New York Times best-seller “After On,” in a 2019 TedTalk.

Venturelli points out that though we are not quite there yet to really make synthetic organisms persist long enough in external environments, the dangers of synthetic biology are genuine concerns. With the cost of synthetic biology plummeting at such a pace, “I think the challenge [now] is making the field more robust and predictable,” she says.

7 Things You May Not Know About Charles Darwin