Dinosaur "Mummies" Exist And Here’s How They're Made

We usually think of fossils when we think of dinosaurs. But a study shows the preservation of skin and soft tissues of dinosaurs may be more common than previously thought. 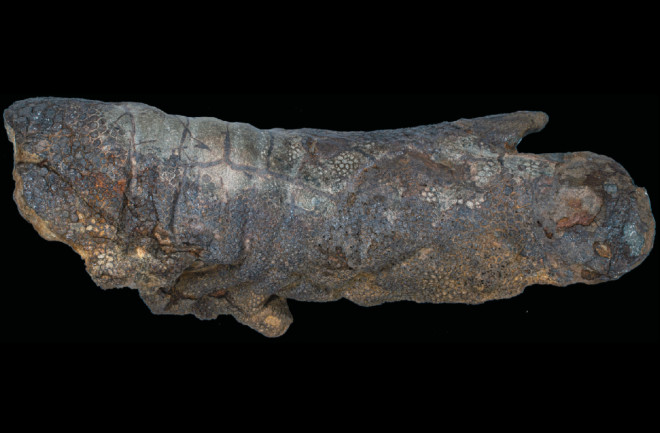 When we think about the fossils of dinosaurs, we almost always imagine the traces of their bones. But what about their skin and their other soft tissues?

Recent research published in PLOS ONE states that paleontologists just discovered a simple process that would've preserved the skin and soft tissues of dinosaurs, many millions of years ago. The simplicity of this process suggests that "mummified" dinosaur specimens may be more abundant than once assumed, the team says.

Fossils are the preserved vestiges of plants and animals from millions and millions of years ago. And although the vast majority of animal fossils feature solely skeletal traces, the occasional specimen can contain the traces of an animal’s softer tissues. For instance, some dinosaur fossils feature the remnants of skin, and their discoverers describe them as "mummified" dinosaurs.

The first discovery of a "mummified" dinosaur was in 1912, and scientists tend to theorize that these fossils of dinosaur skin and soft tissues formed through highly precise, particular processes. Meaning, the body of a dinosaur was dried out and buried before being destroyed by the onset of scavenging and decomposition. Because of this, these dinosaur "mummies" have been assumed to be relatively rare.

The new research in PLOS ONE challenges this assumption. In it, a team of paleontologists analyzed a dinosaur fossil featuring the traces of skin and compared the fossil to the carcasses of more modern animals. This allowed the team to identify a new, simplified process for forming dinosaur "mummies." They may have taken shape through several different pathways and are therefore more abundant than once assumed.

"Dakota taught us that durable soft tissues like skin can be preserved on partially scavenged carcasses," concludes Clint Boyd, a study author and paleontologist at the North Dakota Geological Survey, according to a press release. "These soft tissues can also provide a unique source of information about the other animals that interacted with a carcass after death."

This knowledge, the team says, could assist paleontologists in finding and analyzing many more of these "mummified" fossils in the future.

Studying these swaths closely, the team found several unhealed bite marks across the dinosaur’s skin. The fact that these bite marks showed no signs of recovery suggested that they were inflicted by a scavenging animal after the dinosaur died. As such, the team concluded that the bodies of dinosaurs can still be "mummified" after being touched by the destructive processes of scavenging and decay, contrary to common belief.

The authors then turned to modern animal carcasses to account for this new process. Scavengers frequently raid animal carcasses, targeting the nutrient-rich internal organs and abandoning the scraps — the skin and skeletons — of deceased animals. With this in mind, the authors surmised that scavenging dinosaurs removed the internal tissues of this particular Edmontosaurus, leaving the skin and bones behind to be slowly dried out and buried.

The authors state that this process of "desiccation and deflation" transforms more modern animal carcasses into "mummies" all the time. And this might have developed regularly for dinosaur mummies.