Compared to Neanderthals, Human Brain Growth is Slow and Steady

The deliberate pace for human brain growth ensures that when cells divide, each daughter cell gets one copy of DNA, a new study finds. 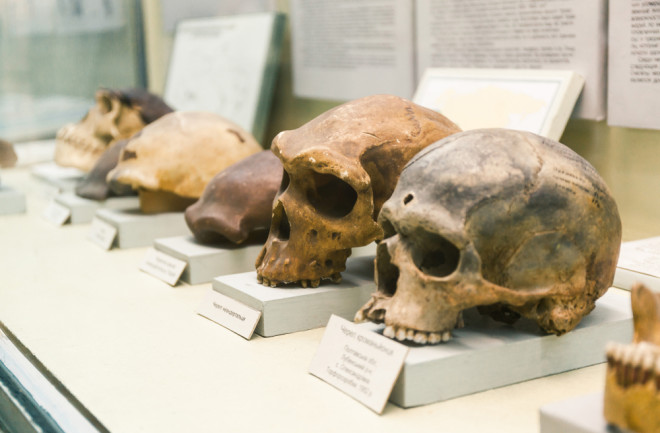 When neural cells divide, they duplicate their DNA, and molecular ropes drag one copy to each daughter cell. Rushing the process can cause genetic mishaps, whether it’s leaving behind chunks of DNA or dragging too many copies to one cell. According to a new study, after diverging from Neanderthals, humans evolved three unique protein mutations that slow down cell division during brain development. The steady pace, the authors say, prevents chromosomal blunders.

“The findings [...] suggest that brain function in Neanderthals may have been more affected by chromosome errors than that of modern humans,” says co-author Wieland Huttner of the Max Planck Institute of Molecular Cell Biology and Genetics in a press release.

Since we separated from Neanderthals, our species evolved 100 changes to our amino acids — the building blocks of proteins — that nearly all of us share. Six of these changes affect cell division machinery. The researchers tested whether these half dozen mutations slowed the process and prevented errors.

To “humanize” developing mouse brains, researchers genetically edited them to our version of genes. Then, to test an ancestral brain, they created a brain-like organoid grown from human cell culture and edited in Neanderthal gene versions. If their hypothesis was right, the human-like mouse brains should slow down cell division, whereas the ancestral, artificial human brain should speed it up.

Both predictions held up. Humanized mice had slower metaphase periods — the point in division when chromosomes align in the center of a splitting cell. Regular mice spent 4.6 minutes in metaphase, but humanized ones spent 5.8 minutes in it. Meanwhile, ancestral genes sped up metaphase in the artificial human brains from 9.2 to seven minutes.

Flawed separation of chromosomes could impact human health, especially during early development. Proto-neurons duplicate rapidly, and aberrant cells pass their incorrect chromosome counts to progeny as they proliferate. Down the line, a defective cell could over- or under-produce proteins, increase cancer risk or burst open and die.

Our brains, then, seem uniquely protected from erroneous cell division compared to our closest relatives. That probably impacts how our neurons develop and organize, the authors say. But whether it contributes to the cognitive abilities that make us uniquely human remains unknown.

More From Discover
Mind
How Obsessive-Compulsive Disorder May Contribute to Superior Memory
Health
This is Your Brain Off Alcohol
Mind
Music, Dance and Bilingualism Could Help Alzheimer’s – If Learned Young
The Sciences
Optical Illusions Are Weirder Than You Think
Mind
People Are Drawn To Others With Similar Body Odor
Health
Researchers Restore Cell and Organ Function in Pigs After Death
Recommendations From Our Store
My Science ShopDiscover STEM Kits
My Science ShopDiscover 2022 Calendar
My Science ShopStrange Science
My Science ShopElements Flashcards
Shop Now
Stay Curious
Join
Our List