Bacterial Builders Are the Key to Concrete Alternatives

Scientists use calcite-producing microorganisms to transform a wet sand mixture into solid brick. 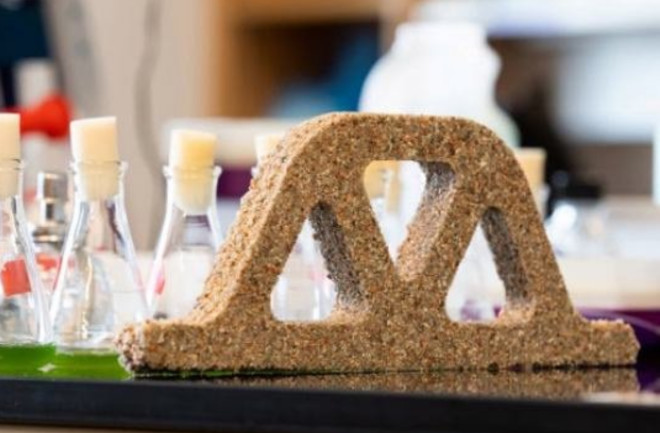 Architectural form made from sand and bacteria. (Credit: College of Engineering and Applied Science, University of Colorado Boulder)

Scientists are turning to the living world to find alternatives for concrete. Many different animals, such as tortoises, turtles and oysters, produce hardened structural materials of their own — but one of the most interesting sources of hard materials comes from certain bacteria that produce calcite, a form of calcium carbonate that makes up limestone.

Concrete is the most widely consumed material on Earth, with about 25 billion tons produced every year. It lasts decades longer than other building materials and it doesn’t burn, rust or rot. But the manufacturing of cement, the primary component of concrete, is the most energy intensive of all manufacturing industries; it’s a major source of carbon dioxide emissions, amounting to 2.8 billion tons per year or roughly 8 percent of global carbon dioxide emissions.

As we stare down the catastrophic changes occurring to the Earth’s climate, we must now reckon with the associated environmental costs of producing concrete. Living construction materials such as calcite-producing bacteria, which require little energy and have substantially lower carbon footprints, could prove useful for a variety of functions.

The bacteria can be used to repair cracks in concrete, for example. Concrete has low tensile strength and is inherently brittle, which makes it susceptible to cracking. Traditional repair methods use chemicals such as epoxy systems that are expensive and require hands-on work. But dispersions of a bacteria called Bacillus halodurans, genetically modified by scientists to enhance its calcite-producing qualities, can be sprayed into the cracks instead.

Scanning technology showed in 2019 that the calcite produced by the bacteria penetrates the entire crack depth to form a permanent seal. A liquid repair system based on this technology has recently appeared on the market.

A more ambitious use of calcite-producing bacteria is in the manufacture of concrete that heals itself. Dutch scientists encapsulated Bacillus bacteria, which can survive for decades without food or water, in biodegradable plastic with calcium lactate as a food source. These capsules were then added to a concrete mix. When a crack appeared in the concrete, rainwater entered and dissolved the plastic, allowing the bacteria to metabolize and produce healing calcite.

“It is combining nature with construction materials,” says inventor Henk Jonkers, a researcher at the Delft University of Technology in the Netherlands. “Nature is supplying us a lot of functionality for free — in this case limestone-producing bacteria. If we can implement it in materials, we can really benefit from it, so I think it’s a really nice example of tying nature and the built environment into one new concept.”

Perhaps the most interesting application of calcite-producing bacteria comes from the work of scientists at the University of Colorado Boulder, who last year used bacteria to manufacture a building block that contains no cement at all. They made the low-carbon construction material by pouring a mixture of sand, gelatin, calcium nutrients and a photosynthetic cyanobacterium into a mold. When the gelatin set, it formed a scaffold that supported bacterial growth. The bacteria then deposit calcium carbonate, turning the mixture into a solid block that’s roughly as strong as a cement-based block.

There’s one key difference, however. Traditional cement-like materials gain their strength very slowly; strength is typically measured only after 28 days. By comparison, blocks made by the bacterial method obtain their full strength after just seven days.

It might be possible to use this method to “grow” structural materials in remote places and hostile environments. Relatively little material is needed and sacks of the constituents could be distributed in a dehydrated form. Such a system might be useful for temporary civil and military structures, paving, facades or other light-duty, load-bearing structures.

The material must be dried out to reach its maximum strength, but there could also be advantages to keeping the blocks wet enough that the bacteria perform other useful functions. This multifunctional building material could be capable, for example, of reversing structural damage in the event of an earthquake. Other functions may be possible too: sensing and responding to toxins in the air or even glowing in the dark.

“We already use biological materials in our buildings, like wood, but those materials are no longer alive,” says Wil Srubar, an assistant professor of engineering at the University of Colorado Boulder who was involved in the research. “We’re asking, ‘Why can’t we keep them alive and have that biology do something beneficial too?’”