From queens to battle commanders, Queen Ahhotep I, Queen Cleopatra VII and others gave their all for ancient Egypt. 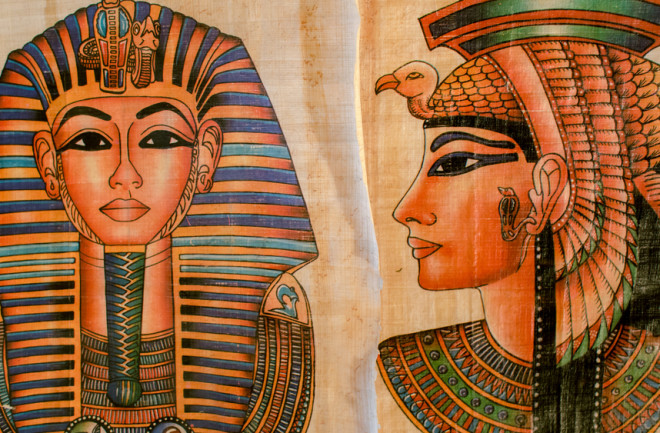 Roman visitors in ancient Egypt often marveled at how differently women lived. Roman law only required a man to raise his firstborn daughter; he could leave any others to die. To the Romans’ surprise, the Egyptians didn’t have a common practice of infanticide of unwanted girls.

Women’s participation in the economy was another culture shock. Well before the Ptolemies took power, Egypt had expanded women’s legal rights. A woman could choose her husband and, if desired, divorce him and keep her dowry. Married, widowed and divorced women were allowed to operate businesses and loan money. As much as a third of the economy in Ptolemaic Egypt belonged to women.

Women warriors led their troops into battle, strategizing and inspiring. At times, political and military leadership even belonged to women. Here are four women warriors who fought for Egypt.

When this Egyptian queen died in 1530 B.C. around the age of 30, she was buried with a necklace with three fly-shaped pendants — a  military honor. The fly pendants were large, roughly the size of a hand, and they symbolized the shooing of enemies. The flies also represented the tenacity of biting insects, meant to honor a military leader with no quit in her.

An honor rarely bestowed upon a queen, Ahhotep I earned that distinction on the battlefield. When her husband, the pharaoh (who was also her brother), died in battle against the Hyksos, an enemy considered to be foreign invaders, Ahhotep I allegedly seized control of Egypt and its military. Her leadership brought order to a land in turmoil — unifying her people and pushing out the Hyksos.

One inscription remembers her legacy and explains why she was fly-worthy upon burial: “The princess, the king’s mother, the noblewoman who knows things and takes care of Egypt. She looked after its soldiers and protected them. She brought back its fugitives and gathered its dissidents together. She pacified Upper Egypt and expelled its rebels.”

In 1472 B.C., Hatshepsut ascended to the throne, ruling for 22 years. She was considered the second woman to hold the title of pharaoh, not queen. She was also the first woman to lead for decades. Others held the title for just a short period or served as regents on behalf of their young sons.

Hatshepsut was born the daughter of a pharaoh, and married around the age of 12 or 13 to her brother. Many scholars believed he was the product of incest, which helped explain why he was ill for most of his young life. When Hatshepsut was widowed at 16, she claimed the right to rule was hers, as a daughter to one pharaoh and widow to another.

Hatshepsut and her mother, Queen Ahmose, ruled together in the early years. Ahmose had a take-no-prisoners mentality when she ordered troops to quash uprisings. After one rebellion in modern-day Sudan, Ahmose called for all participants to be massacred except for one of the chief’s sons, who was brought back to Egypt as a captive.

Hatshepsut learned foreign suppression from her mother, and it provided Egypt with a source of wealth. She organized at least four military campaigns to the Kingdom of Kush, and it’s thought she traveled with her troops and gave orders.

She left a legacy of improved infrastructure and trade routes. Her successor was intimidated by her popularity, erasing her image from statues and other memorials in hopes of undoing the high esteem in which her memory held.

Like other women warriors of Ancient Egypt, Arsinoë III married her brother, the pharaoh. Ptolemy IV wanted the throne so badly that he killed his mother and brother. He wanted the power, not the job, though, and was known as a Ptolemaic party boy. His young wife, however, was far more serious.

Arsinoë served as queen from 223-203 B.C., and was most famous for leading troops in successful battles during the Fourth Syrian War. In 217 B.C., Arsinoë III and her husband went with 55,000 soldiers to fight against the Hellenistic Kingdom of Seleucids.

When the battle was going poorly, Arsinoë III marched up and down the line calling out encouragement. She famously inspired the weary troops by telling them to fight for their wives and children. She also offered them two minae of gold for the victory, and the performance bonus had a motivating effect.

Arsinoë was thought to have led a unit of troops as they pushed their enemy back and reclaimed Syria and Phoenicia for themselves. She was an effective leader — so much so that rebels murdered her when they came for her husband in a palace coup.

In 49 B.C., Queen Cleopatra VII fled Egypt for Syria when a power struggle with her husband (also her brother) threatened to turn deadly. The pharaoh was only about 13 years old, and his advisors were responsible for instigating the conflict.

While Cleopatra was in exile, she organized a group of mercenaries who helped her fight her way back to Alexandria. After forming a political alliance with Roman general Gaius Julius Caesar (which soon became a personal alliance), they took power back from the pharaoh.

Though Cleopatra has long been blamed, some scholars attribute the loss to Marcus Antonius. He’s remembered as a gruff and seasoned general, but Marcus Antonius had little military experience by Roman standards. The couple saw no way forward, and after the defeat, they took their own lives to avoid falling into enemy hands.

What to Know About Alexander the Great and his Mysterious Death