An Underground Army: The 8,000 Terracotta Warriors

Experts think the Terracotta Army was meant to protect Emperor Qin Shi Huangdi in the afterlife and they also think there are still Terracotta Warriors left to be found. 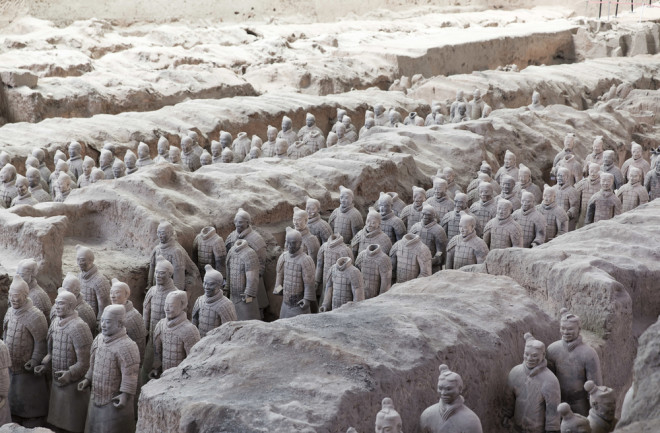 In 1974, a group of farmers were slowly digging a well in Xi’an, China, when one of them hit something hard with his shovel. As he kept digging, he realized he had discovered an ancient clay statue.

Archeologists knew the first emperor of China, Qin Shi Huangdi, had an underground mausoleum somewhere in the area. But the mausoleum had been hidden intentionally after he died in 210 B.C., and caretakers planted trees on top in hopes it would never be found. But as archeologists began to investigate, they realized the clay statue was one of thousands buried just beneath the surface.

Called the Terracotta Army, there are no other burial sites that rival this underground army. And in recent years, new technologies have helped scientists understand how they came to be. Archaeologists have even found 20 more Terracotta Warriors in 2022.

Scientists have yet to unearth all the soldiers buried with the emperor, but they estimate as many as 8,000 statues make up this clay army. The statues were buried in three distinct pits, and they include life-sized warriors, officers and horses.

The warriors wear uniforms that distinguish them from the officers. The horses wear harnesses and the chariots have wheels with dozens of spokes. Some of the chariots are covered but have an open window, others are open-aired and have an umbrella to protect the driver from the sun.

The soldiers were positioned in a battle formation, protecting the emperor in the afterlife. Scientists believe workers began creating the clay army when Qin Shi Huangdi ascended to the throne at age 13 in 246 B.C.

More on the Terracotta Army:

As king, Qin Shi Huangdi spent 25 years battling and taking over warring states. Once he unified China, he declared himself the first emperor. His dynasty ended just four years after his death, but the landmass he ruled over remained unchanged for centuries.

Some archeologists think it took as many as 700,000 craftsmen and laborers to build the army through the years and production stopped when the emperor died in 210 B.C. They worked for nearly 40 years to build the army and experts suspect many of these laborers were enslaved people who were executed once their services were no longer needed.

There are many mysteries surrounding the clay army, and in the past few decades, new and non-invasive technologies have helped scientists understand how the clay army was formed.

Researchers have used scraps found among the statues to determine the material used to build the army. In a 2017 study in Antiquity, scientists examined 12 fragments that came from warrior statues in pit 1, which is the largest of the three pits. They also looked at samples from paving bricks and other statues, such as a figure depicting a palace acrobat.

They found the statues were made with a non-calcareous clay paste that might have come from the loess deposits, a type of siltstone that is common in northwest China. The acrobat and warrior fragments also contained sand temper, which means the sculptors switched up the recipe at one point.

Read more: The 6 Most Iconic Ancient Artifacts That Continue to Captivate

Non-invasive technologies have allowed researchers to better understand the production process. In a 2021 study in Archaeometry, researchers used portable X‐ray fluorescence spectroscopy to see inside the statues.

The X-rays revealed distinct markings on the statues, ‘Gōng’ (宫) and ‘Xianyang’ (咸阳). They believe these are the names of the two workshops responsible for manufacturing the clay army. The names help explain the variances in clay sources and the distinctions in the clay paste.

Although the warriors were made from terracotta, the bronze weapons they held were both real and well-preserved. For years, scientists wondered if the creators had intentionally used an anti-rust agent to protect the bronze.

In a 2019 article in Scientific Reports, researchers were curious about the chromium detected on the bronze and whether it was intentionally used to preserve the weapons. They analyzed samples of the weapons and the soil they were buried in. They found a lacquer had been used to coat the clay warriors and it was rich in chromium. Over time, the lacquer mixed with the soil and the chromium spread to the bronze weapons.

Even though the chromium covered the bronze, the researchers didn’t think it was responsible for preserving the weapons. They suspect the bronze has held-up due to the soil having a moderately alkaline pH content and small particle size.

The Terracotta Army was meant to defend Qin Shi Huangdi in the afterlife, and now the warriors have protection of their own. The site was added to the United Nations Educational, Scientific and Cultural Organization World Heritage list in 1987, and a government run museum manages and monitors the excavation as it continues.