5 of the Most Explosive Volcanic Eruptions

Not all volcanic eruptions, like Mauna Loa, are explosive, but they can change the climate and landscape when they are active. 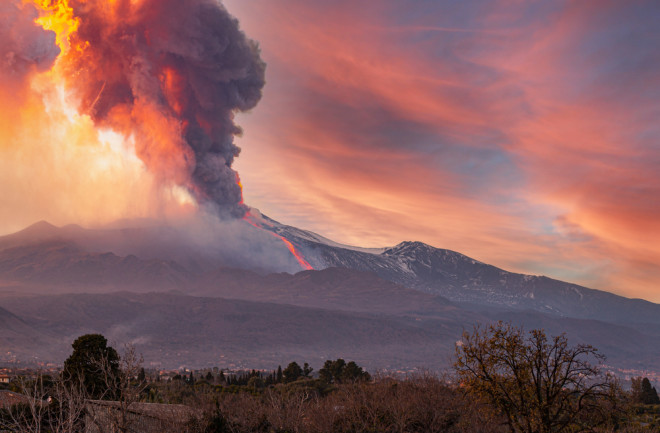 The planet's largest volcano, Mauna Loa, in Hawaii, recently erupted after nearly 40 years of inactivity. It's a relatively small eruption on the volcanic explosivity index (VEI) — a scale used to measure how much volcanic material erupts from the volcano, how high the volcanic matter extends into the atmosphere and how long the eruption lasts.

And according to the United States Geological Survey in Hawaii, the eruption — currently at VEI-0 — doesn't currently pose a threat to the people living near the volcano, though experts continue to monitor the situation for other risks. Volcanic eruptions have the potential to not only cause destruction to the surrounding area but can also cause disastrous effects across the world by changing the climate and ruining agriculture.

Here are five of the most explosive volcanic disasters throughout history and where they rank on the VEI.

On April 5, 1815, small tremors and pyroclastic flows — gray-black clouds of hot rock, gasses and air that move at high speed over the ground — began erupting from Mount Tambora in Indonesia. On the evening of April 10, the volcano, which measured about 14,000 feet tall, exploded so violently it left a nearly four-mile caldera where the peak once was.

Considered the largest volcanic eruption in recorded history, Mount Tambora spewed nearly 36 cubic miles of ash, rock and gasses — including almost 60 megatons of sulfur — into the atmosphere. This blocked out the sun and is believed to have cooled the Earth's temperature by nearly 5.4 degrees Fahrenheit.

The temperature change caused famine in the surrounding areas and reached as far as Europe and North America, where heavy snowfall in July killed most of that year's crops.

The initial blast, pyroclastic flows and tsunamis killed an estimated 10,000 people and 80,000 more from famine and disease on the surrounding islands. Mount Tambora now stands at about 9,300 feet.

Also in Indonesia, in May of 1883, people began reporting ash clouds and tremors coming from the uninhabited island of Krakatoa. Over the next few months, people could hear explosions from nearly 100 miles away.

On August 26, 1883, the first of several eruptions began around 1 p.m. By 2 p.m., an ash cloud rose about 17 miles over Krakatoa. At 10 a.m. the following day — August 27 — the volcano gave way and exploded so forcefully that the sound carried nearly 2,200 miles away in Australia.

About 5 cubic miles of ash, rock and other debris flew about 50 miles into the air, blocking the sun for over two days. Ash and debris covered roughly 300,000 square miles. The eruption triggered several tsunamis, including a wave that reached 120 feet high and killed around 36,000 people. Today, little remains of the island.

On August 24, A.D. 79, the people of the bustling cities of Pompeii and Herculaneum in Italy went about their day as usual. By noon, however, everything would change. Mount Vesuvius erupted with such force it propelled ash and pumice 10 miles into the sky in a mushroom cloud shape.

For the next 12 or so hours, ash and stone covered Pompeii as people fled. A westward wind initially protected Herculaneum. However, a cloud of hot ash, toxic gas and volcanic mud eventually engulfed the city and those who remained.

Anyone left in Pompeii met a similar fate as toxic gas asphyxiated survivors. Pompeii was soon entirely buried by an estimated 19 feet of ash and rocks.

The ruins of Pompeii were found during the 16th century, though the actual excavation didn't start until the 18th century. The ancient cities today are well preserved and can be visited.

The eruption dates are up for debate due to vegetation found in the ash. Mount Vesuvius is still active and could erupt in the near future.

After 600 years of lying dormant, Mount Pinatubo erupted in 1991, sending ash, smoke and rock 28 miles into the air. The falling ash forced 100,000 people from their homes and shut down the U.S. Clark Air Force Base. The ash and debris thrown out of the volcano made it one of the largest eruptions of the 20th century.

Volcanoes have shaped our planet for billions of years. Though humans haven't been around to witness all of Earth's volcanic activity, evidence can still be found today. At Yellowstone National Park, there is evidence of one of the world's supervolcanoes. A supervolcano is rated VEI-8 or higher, making an eruption much worse than Mount Tambora.

An eruption this large would likely emit more than 250 miles of magma. Yellowstone has had at least three eruptions rated VEI-8 — 2.1 million years ago, 1.2 million years ago and 640,000 years ago. These eruptions formed what is now known as the Yellowstone Caldera. Ash from these eruptions covered much of the western half of North America and stretched as far east as Missouri. Wind likely carried ash, fine particles and sulfur across the world and could have caused a change in global temperatures.

The violent eruption 640,000 years ago created a caldera 30 by 45 miles wide. While the supervolcano may one day erupt again, it's not likely to be catastrophic for the next few hundred years, according to the National Park Service. Yellowstone is still an active hot spot with numerous thermal pools, mud pots, geysers and other geothermal activity.

6 Types of Minerals and Metals Found in Your Cell Phone