4 Ways Facial Reconstruction In The Military Has Evolved 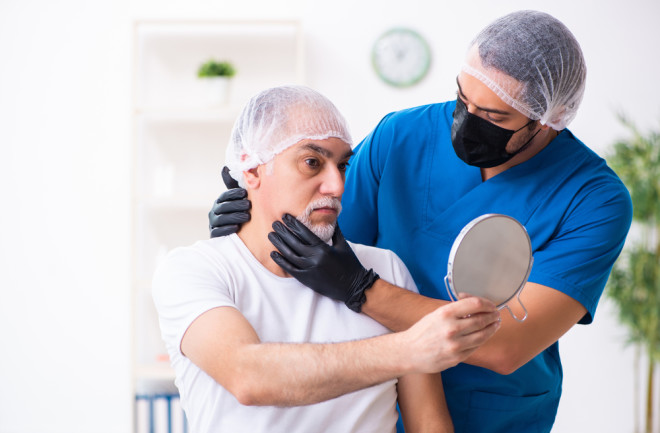 Wartime injuries and the methods to treat them have evolved substantially over the years: As war-time weaponry changed from blades to bullets, so too did the methods of treating wounds.

Facial injuries have greatly impacted soldiers in all wars. However, the real devastation began during World War I. Modern weaponry, including machine guns, shrapnel shells and other explosives, left soldiers with injuries to their nose, jaw and cheekbones. Because of the advancements in antiseptics and anesthesia, soldiers were more likely to now survive these injuries — leaving them to face a different battle.

Some soldiers lost the ability to speak, eat or drink, but overall, many suffered a loss of identity. However, improvements to medicine helped the soldiers gain back a little of what they once had. Here are four ways facial reconstruction changed over time.

Anna Coleman Ladd was an American artist who trained in Europe before setting up her studio in Boston. During World War I, she and her husband — a physician — relocated to France after he was appointed the director of the Children's Bureau of the American Red Cross. At the time, medical technology was advanced enough to save soldiers who would have previously succumbed to their injuries, but there was only so much doctors could do to help soldiers recover from facial injuries.

Ladd used her artistic talent to make facial masks for disfigured soldiers. She took great care to match the soldiers' features and skin tones. Despite her best efforts, the masks couldn't display emotion and were not natural looking. However, the soldiers were grateful for her services. Ladd's work would now be referred to as anaplastology, which is the practice of creating restorative prostheses for patients.

(Credit:Everett Collection/Shutterstock) French soldier wearing one of Ladd's masks in 1918

The modern era of plastic surgery evolved from the work of the military and reconstructive surgery. Perhaps no person was more pivotal in this area than Harold Gillies. A visionary military surgeon, he helped restore soldiers' faces and their lives.

With the advent of machine guns and heavy artillery, WWI soldiers incurred severe facial injuries not seen before in war. Gillies saw the need for a dedicated hospital for military facial injuries and established The Queen's Hospital in 1917.

His work involved the use and advancement of skin flaps and grafts, including the game-changing tubed pedicle that he developed. A tubed pedicle was a skin-grafting technique in which a piece of healthy skin was separated and but not completely detached from the patient. The skin was then stitched into a tube and then attached to the wounded area on the patient's face. After a period of time, when the skin on the wounded area began to receive blood flow, the tube would be removed, and the now flat skin would be used to cover the damaged area.

Medical historian Lindsey Fitzharris explores the incredible developments Gillies made in the field in her new book, The Facemaker. The results of his work went beyond the transformational aesthetic results and helped to restore the soldiers' lives.

In 1920, Gillies published a training manual called Plastic Surgery of the Face. It served as a resource for doctors who wanted to specialize in the emerging field of plastic surgery.

Devastating burns were an ongoing problem for injured military service members in the second world war. At the beginning of World War II, plastic surgeon Sir Archibald McIndoe (coincidently, a cousin of Harold Gillies) realized that the standard treatment for burned Royal Air Force members — drying out the skin — was actually exacerbating the problem by tightening the tissue. He pioneered new techniques, including healing saline baths and the revolutionary advancement of Gillies' walking stalk skin grafts (or tubed pedicle).

His reconstructive process was complex and required multiple steps, with some patients undergoing many operations over several years. The airmen under his care became known as The Guinea Pig Club because they had all undergone McIndoe's innovative treatments at Queen Victoria Hospital. The group began as a drinking club but became a source of social support and friendship for the members. With under 40 members when it started, the club grew to a total of 649 members.

As medicine and trauma care improved during the Korean and Vietnam wars and into wars in the Middle East, military plastic surgeons were involved in complex facial reconstruction once military members were flown back to medical facilities in the United States. As life-saving measures continue to improve, there is an increase in wounded military members who require reconstructive surgery once they're stable enough.

Discover who is working to make facial reconstruction medicine ready for the wounds of 21st-century war.