Tiny Robots Are Fishing For Microplastics

The trick to cleaning up our oceans and waterways may be small, fish-inspired robots. 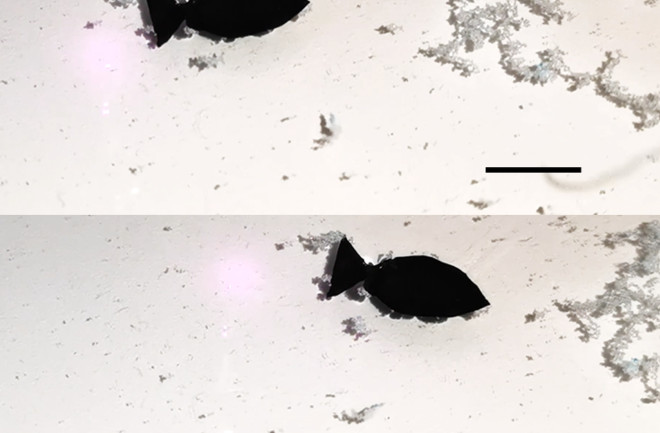 There are plenty of fish in the sea. Some are big, and some are small. Some are slow, and some are skittish. Some are bold and bright. And some are actually fish-shaped robots, made to absorb microplastics. A new study in Nano Letters reveals that researchers recently developed a tiny robot that looks and moves like a fish, collecting detrimental plastic particles as it swims through the water.

The plastic particulates that pervade our oceans and waterways threaten wildlife, and they typically stick around. In fact, microplastics can take thousands of years to deteriorate, and they tend to fall into the fissures between rocks at the bottom of bodies of water, making them a challenge to clean up in the meantime.

In recent years, researchers consider small, self-propelled robots as a potential solution to this problem. The only question is, how would these robots work?

Researchers from the American Chemical Society took inspiration from nature to answer this question. They fashioned a small robot (approximately a half-inch in length) in the shape of a fish out of soft materials that absorbs polystyrene microplastics. They then added a flexible tail, which waves from side to side and propels the robot through the water whenever an attached laser turns on and off.

Faster than any other swimming robot of a similar size and material, the researchers’ machine moves a bit more than an inch-and-a-half per second – approximately the same speed as a phytoplankton.

Built to Swim, Built to Survive

Though similar swimming robots tend to sustain serious cuts and scrapes while in the water, the researchers turned to nature once again to make certain that their machine could withstand continued use.

They modeled the material of their robot after mother-of-pearl: the shiny, strong and malleable substance layered in clam shells. Layers of this material, sometimes called nacre, acquire their sturdiness from their microscopic structure. This transitions from stiff calcium carbonate on one side of the layers to flexible, silk-like proteins on the other. In addition to mirroring this layered structure synthetically, the microplastic-absorbing material fashioned for the robot could also mend itself in case of damage.

Ultimately, the researchers’ testing revealed that the robot could collect microplastics rapidly and repeatedly, making the machine a potentially invaluable tool for tracking plastics and picking up pollutants in the future. All in all, though it may be fish-shaped, the future of this robot is anything but fishy.