Probing the Complex Influence of Video Games on Young Minds

My son’s social isolation prompted me to reconsider video games, and some dated research about their influence. 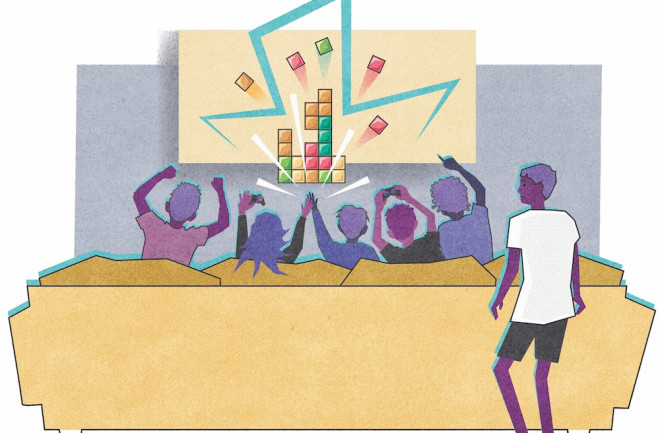 My husband and I were eating out with our son, Eddie, who was then 2, when a couple came in with a young boy wearing headphones and staring at an iPad as he walked. For the entire meal, the boy was glued to his screen while his parents chatted amicably as if he wasn’t there.

“What’s the point of having a kid if you’re not going to talk to him?” I said to my husband.

We vowed not to buy our son an electronic device until he’s 30. And video games, one of the main reasons children want these devices, would be verboten.

So far we’ve stuck to that agreement, though it has not been easy. When other parents would go out for a meal and hand their child a phone, we had to entertain our kid. We brought a knapsack filled with crayons, markers and spiral sketchpads with thick paper. We lugged around Jenga, Uno and Yahtzee. We drew pictures and built mini forts out of jelly packets — anything to keep our son off video games, which I saw as the devil’s poison.

Indeed, there’s a body of research, like a meta-analysis from October 2018, that shows that kids who play violent video games are more aggressive. Another paper, from September 2020 in The International Encyclopedia of Media Psychology, indicates that repeated exposure can cause desensitization to violence, making people less empathetic.

Video games can also be addictive, so addictive that the World Health Organization included a condition called “gaming disorder” in its International Classification of Diseases; the American Psychiatric Association considers it a condition warranting further study. And one 2020 study published in Developmental Psychology tracked 385 adolescents over six years to find that 28 percent of the gamers were prone to increased levels of depression, aggression, shyness and anxiety at the end of that period.

That shouldn’t be surprising, says Douglas Gentile, who has studied developmental psychology and media violence for 30 years. Games can have significant influence, and children are impressionable. So, whatever the content of the game is, kids are likely to learn it, Gentile says. If it’s a violent game, they may learn aggression skills. And yet, the same is true for beneficial video game elements, such as reading or math. If it’s a pro-social game, they’ll probably learn pro-social skills.

“Whatever they practice, they will learn, whether or not they want to,” Gentile says. But the worst problem with gaming, at least for our child, is one I didn’t anticipate: alienation.

It took a while for Eddie to make friends at school. Now, in fourth grade, he’s finally forged some bonds, mostly through sports. But in their free time, all his pals play video games, and my son does not. He felt like an outsider before finding these friends, and now my ban is inadvertently keeping him isolated — not just from his classmates but from the rest of modern society, it seems.

Some 76 percent of American kids play video games, according to the Entertainment Software Association, the trade group for the U.S. video game industry. For my son, not only did he miss out on playtime, but he didn’t know how to play. During the pandemic, a classmate had a virtual birthday party, where everyone was invited to play Roblox. My son and I couldn’t even find the virtual room where the game was being played. As I frantically texted other mothers, asking them how we could find his classmates, my son grew angry and then upset.

Since then, he has found a way around my ban: He plays video games at friends’ houses. I was initially annoyed, until he came home one day and told me how happy he was to be in the fold. He began to cry, recalling how much he had felt like an outsider. “Now I can play with everyone,” he said.

I was out last week with a fellow parent and lamented how I can’t raise my son the way I would like. If I forbid him from playing video games, he wouldn’t be able to go to friends’ houses because that’s what they do after school, or he would be isolated next to them as they played. Either way, he’d miss out on important bonding.

“Don’t do to him what my parents did to me,” my friend said. Her parents forbade her from watching TV and eating sugar, prohibitions that left her clueless about all kinds of cultural references. “They made me feel like a weirdo,” she said.

Video games are now such an integral part of the social fabric, not playing them is akin to growing up without a TV, says Nick Bowman, a gaming researcher at Texas Tech University. When people talk about their childhood these days, their memories include playing video games with their parents and siblings.

“It’s a family ritual. It’s a friend ritual. The data suggests that those are the things people are going to remember 40 years from now,” he says.

Bowman also notes that game research has evolved. For the first 20 years, studies were focused on the potential harms, like addiction and aggression. Today, games are viewed for their art, their teaching potential and their ability to make people feel things. It’s not that video games have no ill effects. But the myopic focus on those ill effects now seems overblown and dated, he says.

“They don’t match the reality of the millions upon millions of people who play games every day and don’t experience any of those negative effects,” Bowman says.

I dug deeper into the research and saw studies illuminating the benefits of gaming. People who play video games can learn how to make good choices, says James Paul Gee, a linguist at Arizona State University and author of What Video Games Have to Teach Us About Learning and Literacy.

Most games involve simulations where choices must be made, and players can see the consequences of their decisions, Gee adds: “It turns out that teaching people to make good choices correlates with knowledge. If they know how to make good choices in life or in problem solving, you can give them [any] knowledge test, and they will ace it.”

C. Shawn Green, a cognitive researcher at the University of Wisconsin-Madison, says questioning whether video games are good or bad is like asking, “What are the effects of food on the body?” Different games have different effects on players, some good and some bad. Action games, for instance, can help how we perceive and respond to stimuli around us, his research shows.

Because action games require players to react to stimuli anywhere on the screen in a matter of seconds, playing them can enhance one’s ability to pick out important information in a cluttered scene. Players also learn to toggle more quickly from one task to another, a process that can take as much as 200 milliseconds, Green says.

“Basically what your brain is doing is switching tasks,” he says. “Playing these types of games diminishes that cost of switching.”

On a recent grocery run, I noticed how the young man at the counter was packing my groceries into paper bags. He did it with such care, making sure he chose the right item and placed it in the bag in the direction that would achieve maximum efficiency.

“Do you play Tetris?” I asked.

He added that he plays a lot of video games. So I asked him the thing I fear most about my son playing: Are the games so exciting and overstimulating that everything else in life seems boring in comparison? He thought about it for a moment, with a pause. Then he said he really wants to become a surgeon — a goal far more important to him than any video game. Interestingly, he added that gaming may help, as his fingers are now so nimble that it has enhanced his suturing skills. Studies bear this out.

As I left the store, I wondered if my son had something in life he liked more than video games, something that made real life as exciting as the virtual ones. I knew immediately what it was. It was the company of friends. He’s not addicted to video games. He’s addicted to companionship.

But aren’t we all?

More From Discover
Mind
Research on Psychedelics and How Mushrooms Can Help Combat Depression
Technology
What Is a Social Media Cleanse?
Mind
Calming Kids With Electronics May Affect Emotion Regulation Skills
Mind
How Failing Could Actually Help us Succeed
Mind
Try These 6 Science-Backed Secrets to Happiness
Mind
What Is Emotional Blunting, and Do Antidepressants Cause It?
Recommendations From Our Store
My Science ShopDiscover STEM Kits
My Science ShopDiscover 2022 Calendar
My Science ShopStrange Science
My Science ShopElements Flashcards
Shop Now
Stay Curious
Join
Our List