Yes, Vikings Really Did Live in the Americas 1,000 Years Ago 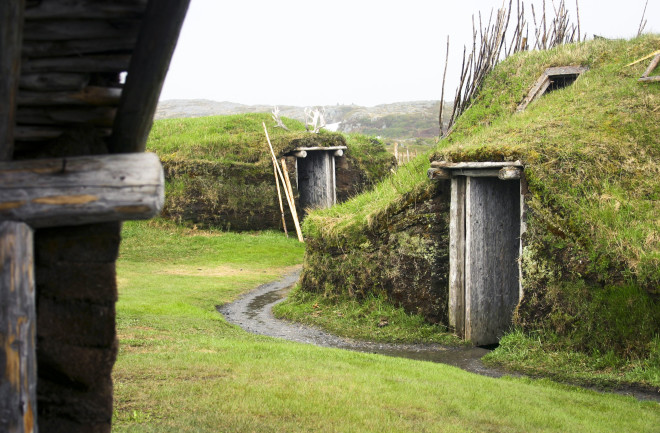 Exactly 1,000 years ago, some of the first known European visitors were living, eating and chopping down trees off a small bay on the northern end of Newfoundland. These Norse seafarers didn’t etch a date into a tree or leave a rune stone during their temporary foray in the Americas.

But we now know for certain they were really there in A.D. 1021, thanks to a solar storm that occurred about a quarter century before they used local trees to build at at a Viking settlement called L’Anse aux Meadows. “We know that in 1021 somebody was cutting down this wood,” says Birgitta Wallace, a retired archaeologist with Parks Canada who still works at the archaeological site at L’Anse aux Meadows.

L’Anse aux Meadows has fascinated historians and archaeologists for years since it was excavated in 1961. The settlement was clearly of Viking origin, pushing the date for the first Europeans to reach the Americas centuries earlier than 1492, when Christopher Columbus touched land in the Bahamas.

The discovery of the settlement in Newfoundland also tease a potential connection with the land to the east of Greenland described by Viking sagas as Vinland, or the "land of wine." According to these Norse texts, Leif Erikson set out westwards from a settlement in Greenland first reached by his father Erik the Red. But before L’Anse aux Meadows, no conclusive archaeological evidence of Vikings had been discovered west of Greenland. Since the surviving sagas describing these journeys date to several centuries after the events supposedly occurred, scholars have always been leery about the exact timing, as well as what land Leif and a few others who followed him may have meant by Vinland.

These days, solar flares — intense bursts of electromagnetic radiation from the sun — spark concern here on Earth due to the damage they can cause to communications technology and the energy grid. But centuries before we worried about GPS satellites and power transformers, these solar storms still left their mark on human technology; at least, when it was still mostly made of wood.

Tree ring experts now know that large solar flares left evident traces on tree rings, which can be seen in a rapid increase of carbon-14, or radiocarbon, in the wood. Researchers identified a solar flare that struck Earth in 993 based on tree ring evidence, according to a 2013 study in Nature Communications.

Some experts wondered whether this date might help them date L’Anse aux Meadows with more certainty. The site contained more than 500 pieces of wood, Wallace says, including parts of posts as well as extra debris cast off in the construction of other artifacts. Wallace and her colleagues focused in on three pieces from three different trees that were in good enough condition, and that still had sufficient bark to count backwards towards the anomaly in the 993 tree ring caused by the solar flare. “It’s an enhanced form of dendrochronology,” Wallace says, referring to the scientific method more commonly known as tree-ring dating.

These pieces of wood were also cut by metal blades — something not produced at that point by the Indigenous people in the area. Counting the tree rings, from the solar flare marker in the wood towards the bark, revealed the pieces of wood were cut in A.D. 1021. “The dating is interesting; it does confirm everything else we know about this site,” Wallace says.

While the discovery puts the age at an even millennium, it still doesn’t solve many of the lingering questions about L’Anse aux Meadows. All we can say for sure is that the Vikings were there that year — it doesn’t necessarily tell us how long they were there before or after. Wallace says the date is a little later than previous research had assumed the Vikings were at the settlement — a previously accepted date for the voyages in the Norse sagas was roughly A.D. 1000 — about two decades before any Vikings were at L’Anse aux Meadows. But other researchers have held that 1000 was too early for Leif Erikson to have led an expedition, as he would have been just a child at that time.

In any case, other evidence shows that the Vikings weren’t at L’Anse aux Meadows for much longer than a decade, says Gordon Campbell, a retired professor at the University of Leicester and author of the book Norse America who was not involved in the recent study, But L’Anse aux Meadows doesn’t show much, if any, real evidence of contact between Indigenous Americans and the Vikings who were there. One of the best clues is an arrowhead associated with Indigenous craftsmanship found in Greenland that contains quartz only found in Labrador.

Just the same, Campbell is impressed by the refined technique used for dating the L’Anse aux Meadows site. “The combination of a good site and a superb archaeologist is a wonderful thing,” he says.

More to Dig Up

Campbell believes there is still more to be revealed at the Newfoundland site. Some butternut shells have been discovered, for example — an intriguing piece of evidence since butternut trees are usually only found further to the south in Nova Scotia or New England. Someone would have either brought these nuts from the south to the Vikings, or the Vikings would have gone south and found the nuts themselves. If these remains could be dated more precisely, they could reveal more about L’Anse aux Meadows.

Meanwhile, Wallace thinks that the L’Anse aux Meadows site really represents the Vinland where Leif Erikson landed. Only an elite would have had the resources to put together a voyage from Greenland, and Leif was the right kind of person to do that, she says. Other evidence based on fire-making tools reveals that Greenlanders were certainly at the Newfoundland site.

At any rate, the Vikings didn’t leave much of a lasting impact in Newfoundland. No evidence has shown that they transmitted disease, intermarried with, or traded technology or culture with Indigenous people there, if they indeed contacted them at all. “It really didn’t mean much,” Wallace adds.

Are Rocket Scientists and Brain Surgeons Any Smarter than the Average Person?

What Is Cuffing Season and Is It a Real Thing?