Winter's Tale: This Prosthetic-Tailed Dolphin Was More Than A Movie Star

Winter the dolphin died in 2021, but her story of a prosthetic tail continues to inspire people battling physical challenges. 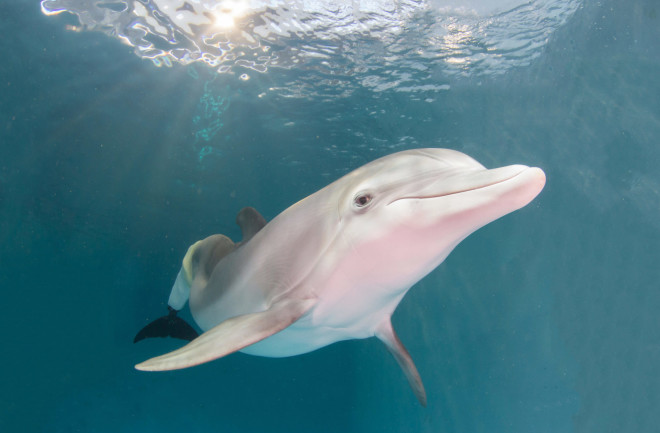 Winter didn’t have an easy life in the beginning. At just a few months old, the bottlenose dolphin became tangled up in a crab trap in a lagoon in the Canaveral National Seashore in Florida. The rope cut off the circulation to her tail for some time before a fishing boat and a staff member from the SeaWorld Research Institute helped rescue her in 2005.

Winter’s tail was lost, and had to be amputated. In many unfortunate cases, this is where the story would end. “But this was a very strong little dolphin,” says Kevin Carroll, vice president of prosthetics at the Hanger Clinic, a company that builds prosthetic limbs and provides orthopedic care for humans — and sometimes animals.

After the accident, Winter was sent to the Clearwater Marine Aquarium near Tampa. That's when Carroll and his team of prosthetists at Hanger got involved.

Carroll specializes in creating prosthetic limbs for amputees. People can lose limbs in all kinds of ways, whether that's an entire leg or just a foot. Amputees also come in varied sizes, shapes, weights and ages, meaning Hanger has to adapt every creation to its user. But the overwhelming majority of the cases he had dealt with up to that point were humans.

“We had to start from scratch with the dolphin,” Carroll says. Nonetheless, he approached the challenge with an open mind.

Carroll and his team used a spring blade system for the tail made of a carbon composite. The prosthetic would allow the dolphin to propel itself through the water, he says. But another challenge arose in how they would attach the artificial tail to Winter’s body. With people, there is often some piece of a residual limb that can be used as a foundation for the prosthetic. But dolphins move the entire lower section of their body, from side to side and up and down. The team didn’t want Winter to lose that ability, so they needed the spring blade to be able to rotate.

Ultimately, the prosthetics team used a suction system with a gel-like material that would stick to Winter’s torso using a kind of sleeve. The sleeve acts similar to the way you can’t easily pull off a rubber glove if you grab it by one finger. “That held in place pretty well,” Carroll says. But they also had to make sure that the skin wouldn’t gradually tear at the dolphin’s skin. “We wanted it super soft and super stretchy,” says Carroll.

Even after they developed the tail, the team's work was far from done. Winter was only a few months old when they made the first one. But she grew up quickly. By the time the dolphin reached adulthood, Carroll says, she was roughly four feet long. For the Hanger team, this meant building a new prosthetic tail that would keep up with her changing body every so often. Winter would recognize the team when they came to the aquarium, greeting them sometimes when they arrived.

“She’s just like a little dog,” Carroll says. “We were enjoying every aspect of it, we never looked at it like a challenge.” As for Winter herself, he notes that she didn’t always seem happy, but “had more up days than down days.”

Winter died in 2021 due to a gastrointestinal infection at the age of 16. But her legacy lives on in more ways than one. For starters, Winter's real-life survival story inspired the 2011 film Dolphin Tale, with Morgan Freeman playing a character inspired by Carroll. (Winter, naturally, played herself.) In Tampa, she was both a local celebrity and a tourist attraction. And the prosthetics team even named the gel that they created to affix the tail to her body — WintersGel — after the dolphin. “The technological advances made on her behalf with WintersGel continues to change the lives of individuals wearing prosthetics every day,” says Kelsy Long, spokesperson for the Clearwater Marine Aquarium.

Since then, Carroll says he’s worked with a number of other animals, wild and domestic —everything from a sandhill crane that lost a leg to sea turtles that lost a flipper. “While my main focus is on restoring the mobility of our human patients, I do try to help our injured animals friends from time-to-time as I’m able,” he says. Carroll also says that he’s worked with many people with physical challenges of their own that came to Hanger after visiting Winter at the aquarium.

Long adds that millions of people around the world were inspired by her story. “Winter will forever have a lasting impact on veterans, children and adults experiencing limb loss and limb differences,” Long says. “She reminded us to celebrate our differences and that with perseverance we can overcome any life challenge.”

Asexual Reproduction is Surprisingly Common in the Animal Kingdom

Meet 8 of the World’s Longest-Living Species