Will Woolly Mammoths Ever Make a Comeback?

Experts continue to claim that that they can bring the woolly mammoth back from extinction, but the reality is far more complicated. 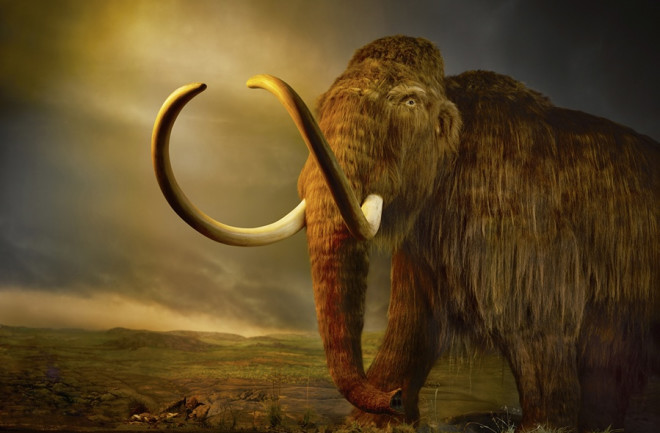 An iconic example of the Ice Age megafauna of North America, the mammoth went extinct soon after humans arrived on the continent — except for isolated populations. (Credit: Stephen Wilkes, Courtesy of the Royal BC Museum and Archives, Victoria, BC, Canada)

In the six million years that humans and our ancestors have walked the Earth, woolly mammoths might as well have vanished yesterday: The very last of their species, Mammuthus primigenius, died out about 4,000 years ago, when the remaining survivors underwent a “genetic meltdown” during their isolation on Wrangel Island. Modern humans had seen these beasts, hunted them, made homes from their bones, and more for thousands of years, only to have the last of the shaggy beasts perish in isolation off the coast of Siberia.

Perhaps it’s the fact that our species has had such a long connection to mammoths that has made us yearn for their return, as if such creatures should still be here. Some experts are claiming that they can do just that. But the question facing geneticists, ecologists, ethicists, paleontologists, and the public isn’t about whether something mammoth-like could be created, but if trying to raise the Pleistocene dead is wise in the first place.

Researchers have been toying with the idea of whether a mammoth could be cloned or otherwise genetically engineered since the late 20th century. More recently, however, interest in the prospect of "de-extinction" has helped popularize the concept. Texas-based biotechnology startup Colossal Biosciences, for example, has claimed that it can create mammoth-elephant hybrid calves by 2027.

Read more: Are Woolly Mammoths a Solution to the Hairy Problem of Climate Change?

With a deep understanding of the mammoth genome and gene-editing techniques such as CRISPR, the pitch usually goes, geneticists would be able to start with an Asian elephant and reverse engineer a woolly mammoth. Such a test tube mammoth wouldn’t just be a feat for genetics, but, some researchers contend, might help revive ancient ecological reactions among the world’s remaining steppe habitats. If mammoths once again roamed the Earth, the argument goes, they might flatten northern forests into chilly grasslands that would stay colder for longer — and potentially retain trapped carbon that otherwise might escape into the atmosphere.

Such plans rely on a great deal of “if”s, and not just about the scientific process. Paleogeneticist Beth Shapiro, for example, noted that cloning a woolly mammoth would require the discovery of an intact mammoth cells. Those have never been found, and probably never will be given how decay and the nature of freezing affects the soft tissues of even the most impressive mammoth “mummies” found in Siberia and the Yukon.

Instead, some researchers have switched tactics to modifying the genes of living Asian elephants — the closest living relative of mammoths — to be more like those of their extinct relatives. But such procedures involve genetic manipulation of an endangered species, involving many embryos and perhaps even test animals that would not survive. Such proposals veer into the cross-section between science, technology and ethics, the latter of which has frequently been left out of the conversation. “Often, there are just gestures towards some of the ethical questions that a technology might raise,” says ethicist Yasha Rohwer of the Oregon Institute of Technology, “but seldom any conclusions.”    Rohwer notes that the proposed plans for mammoth de-extinction often involve both individual animals and the communities of living things such a creature would be introduced into. Mammoths were probably social animals, Rohwer points out, but a re-created mammoth “will be born without a social organization to be socialized into.” The generational knowledge that kept mammoths alive for hundreds of thousands of years cannot be replaced.

Beyond that, from an ecosystem perspective, the question becomes one of individuals versus communities. Even if a re-created mammoth was able to kickstart dormant ecological interactions and slow the effects of human-caused climate change, the individual animals used to re-create the mammoth will still undergo pain and death in a world different from the Ice Age. It can become a matter of weighing the realities of an individual against the potential positives for a communities. As Rohwer noted in a 2018 paper on the ethics of mammoth de-extinction, the positives could only be realized if suffering to the animals involved throughout the project is absolutely minimal. So far, no such assurances have been made.

Understanding how little we yet know about the real, once-living mammoths that once trod the globe only makes the prospect of bringing mammoths back all the more unlikely. For one thing, a living, breathing mammoth is much more than the animal’s genetic code. “We don’t yet fully understand the evolutionary history of mammoths,” says Royal Alberta Museum paleontologist Christina Barron-Ortiz.

A batch of new studies suggest that the natural history of the massive animals was more complicated than we knew. In 2016, for example, paleontologists found that the several mammoth species that were alive during the end of the Ice Age interbred with each other and were not as genetically distinct as once thought from bones alone. Then, in 2021, paleontologists reported that an analysis of geochemical clues in a mammoth’s tusk indicated that a single mammoth roamed all over Alaska during its lifetime. In that span, it spent different parts of its life in different areas, indicating how little we know about how mammoths changed throughout their lives. Without such detail, we simply can not predict what the needs of a growing, mammoth-like animal would be.

Still, what we’ve come to learn about mammoths’ living relatives gives us some idea of what we’re missing. Living elephants are highly intelligent, social animals that pass on behaviors and knowledge to their offspring — everything from how to raise young to where to find watering holes in harsh seasons. Paleontologists have every reason to believe woolly mammoths did, as well, but the exact nature of this knowledge went extinct along with them.

On top of that, Barron-Ortiz points out, mammoths passed on their gut microbiota down along family lines. These crucial microorganisms would have allowed mammoths to break down the plants they ate and stay healthy. “The microbiota of a newborn is first acquired during birth and through the mother’s milk,” she says, which would have been later modified by what the mammoth ate. With no mother mammoths, this precious and important microbial gift could not be passed to a mammoth created in a lab. “Mammoths formed complex interactions with members of their own species, with other species, and with their environments,” Barron-Ortiz notes. As such, any attempt to re-create a woolly mammoth would only be an approximation of the animal itself — not the real thing.

Other questions remain unclear, like how mammoths survived the chill of high latitude habitats, where the summers are short and darkness persists for months. "How did they navigate the landscape? How did they use different resources available to them? How did they communicate with each other?” Barron-Ortiz asks.

Rohwer adds: “We just will never really have full knowledge of how mammoths behaved before they went extinct,” as the fossil record is by its nature incomplete. Paleontologists may gain insights into some of these questions, and others may forever remain mysteries. Either way, experts are far from assembling a complete understanding of a species our ancestors watched slip into extinction just 4,000 years ago. Whatever we can learn is still held in the soil and permafrost — and the tusks, skin and bones of beasts that once were, and can never truly be again.