The views of Mt. Rainier from the Seattle-Tacoma area are spectacular, but new models show how dangerous this Cascade volcano can be. 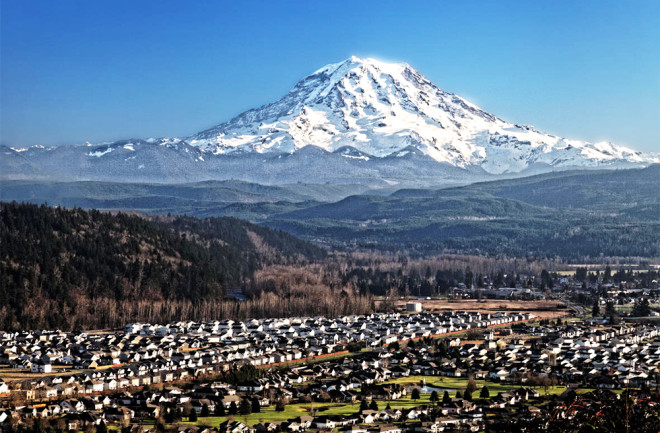 A view of Mt. Rainier in Washington seen from the Puyallup Valley. Credit: USGS.

A question I get asked a lot (and I mean a lot) is what I think the most dangerous volcano in the United States might be. Now, that is a loaded question in more ways than one. Even defining what we mean by "dangerous" is fraught with peril. Is a volcano more dangerous if it erupts frequently but smaller eruptions? Or maybe it only has infrequent large blasts and happens to be near a populated area? Could it be one that might be a hazard even when it is not erupting?

Really, it comes down to a mix between a few traits of any volcano:

When you try to look at the volcanoes of the United States with these lenses, a list can begin to form. The US Geological Survey publishes a "Threat Assessment" for US volcanoes, the last one in 2018. Using their rankings, Hawaii's Kīlauea is considered the most hazardous thanks to a mix of people living near the volcano and how frequently it erupts. Mount St. Helens comes in second because it is the only Cascade volcano to have erupted over the past 100 years.

But at number 3 is the volcano about which I feel the most concerned: Rainier. Located near the Seattle-Tacoma-Olympia area, it is the largest Cascade volcano and one that we have proof can cause a major impact to this metropolitan area. Sure, Rainier hasn't had a confirmed eruption since ~1450 CE, although there may have been small, unconfirmed puffs during the 1800s. Yet, the danger of Rainier exists whether it is erupting or not.

When the Hazard is Mud

That's because Rainier is known for causing volcanic mudflows, also known as lahars. These flows are a mix of volcanic material, water, debris from the surroundings and pretty much anything else they pick it. They are a slurry of all this stuff, making a lahar more like a river of flowing cement than water.

This thick consistency means that they can take out much of anything in their path, including buildings or bridges. It also means they can fill a valley with tens or hundreds of feet of debris. What is left behind is a landscape that looks like it has been paved.

An ~25 foot thick outcrop of the Osceola Mudflow from Mt. Rainier. This section is over 30 miles from the source. Credit: USGS.

Lahars usually form one of four ways. First, during an eruption on a volcano with snow and ice, the frozen material can melt and mix with volcanic debris to create a flow that rushes down river valleys on the volcano. Second, heavy rains during or after an eruption might cause the loose volcanic debris (like ash) to flow as more water gets mixed in. Third, a crater lake at the top of the volcano might breach, sending water down the slopes that rapidly mixes with volcanic debris. Finally, a landslide from the volcano might dump a whole pile of volcanic material in river valleys. These last two could happen during an eruption, get triggered by an earthquake or might occur without any warning.

Lahars can be incredibly deadly if people aren't warned. The 1985 eruption of Nevado del Ruiz in Colombia is the most famous example of this. A small eruption created a lahar that swept down the volcano and wiped the town of Armero off the map. This mudflow likely killed over 20,000 people.

Lahars are a persistent threat at volcanoes around the world. Volcanologists in New Zealand are constantly monitoring Ruapehu because of the crater lake and snow/ice on the volcano that could make lahars that would endanger the skiers on its slopes. Lahars created from the ash of the 1991 Pinatubo eruption in the Philippines still occur during heavy rains.

This threat of lahars from Rainier and other volcanoes means it is vital to understand what might happen when the next lahars happen. A group from the US Geological Survey used a new set of computer models (called D-Claw) to create simulations of potential lahars from the west side of Rainier -- the most likely spot for the next lahars -- and found that they could devastate towns well below the volcano's summit.

Rainier has a long history of lahars. Over ~6,000 years, the volcano has experienced at least 9 major lahars that moved hundreds of millions of cubic feet of debris. How big is that? Well, that much material would coat Manhattan with 1-10 feet of muddy volcanic debris. The biggest of these flows was the Osceola Mudflow. This lahar occurred ~5,600 years ago and moved ~130 billion cubic feet of debris, enough to bury Manhattan under 130 feet of the stuff.

The most recent lahar from Rainier was the Electron flow that happened only ~500 years ago. This lahar, "only" ~9 billion cubic feet, came down the volcanoes west side and travelled down over 30 miles to reach what is now the town of Orting. Unlike the Osceola lahar, the Electron lahar was not triggered by any eruption, but rather a landslide caused by weak rock and gravity.

Simulation of a large lahar from the Sunset Amphitheatre area of Mt. Rainier. Credit: USGS.

The new D-Claw simulations look at flows ranging from the size of the Electron flow to much smaller, potentially more common events. What the USGS was interested in was how fast the flows might travel, how far they might go and how deeply they might bury communities along the way.

In the case of an Electron-sized flow from the Sunset Amphitheatre on Rainier, they found that the lahar would sweep down the slopes at over 10 miles per hour with a flow front that towered over 12 feet. This flow would hit Orting in about an hour and finally come to rest all the way down in Sumner and Puyallup near Tacoma (see above).

Other simulations looked at lahars that travelled down the Nisqually River valley. These would hit Lake Alder and likely cause the Alder Dam to spill over, a major potential hazard for those even further downstream (see below).

In both cases, the amount of material moving down the Nisqually and Puyallup River valleys down major lahars is astounding. The simulations estimate that the lahars would be moving 8-10 million cubic feet per second down the valleys. That is over 300-400 times the flow over Niagara Falls! This sort of volume and mass moving downstream into populated area would do billions of dollars in damage.

Now, their models are not forecasts or predictions. They are merely simulations that help hazard planners understand what might be at stake. Brian Terbush, the Earthquake/Volcano Program Coordinator for the Washington State Emergency Management Division, said that the new simulation reinforce the need for preparedness:

"The report confirmed that the amount of warning time people have been practicing their evacuations with is accurate, which is good news! Especially since most recently on April 29th, 14,500 students and teachers showed that they can walk out of the hazard zones within that timeframe.  However, this report also re-emphasizes how critical it is that communities in the path of lahars from Mt. Rainier, especially those in the immediate Puyallup and Nisqually River Valleys, understand their evacuation routes, and how they will be alerted of an approaching lahar."

Lahars are a worldwide hazard, but with sufficient warning, people can get out of the way of lahars. At Rainier, the Pierce County government and the USGS has a lahar early warning system, where sensors along the river valleys can send a signal to towns below the volcano if a lahar is detected. The system is in the process of getting an upgrade to add more sensors that can respond in realtime to any lahar. Some of these new sensors will end up in the Nisqually River valley to add to those already installed along the Puyallup River.

In the end, these simulations will help get people around Rainier better prepared to evacuate during the next lahar. Know what to do during such an event is key, so if you live near a volcano that could have lahars, you should check with local emergency management to see what the evacuation plans and preparedness might be.

What Does a Year at Yellowstone Caldera Look Like?

Meteorologists and Social Scientists Team Up to Save Lives