Why Cannibalism Is A Common Behavior For Some Animals

While humans do not accept cannibalism, this behavior is common and predictable in some animals out of necessity. 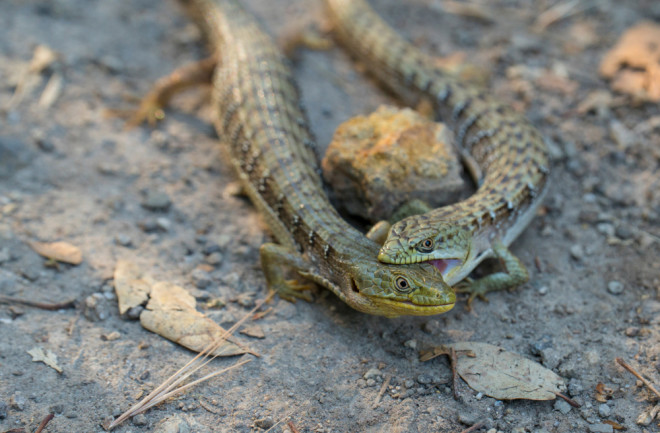 In November 1820, a sperm whale attacked and sank the Whaleship Essex while the 20-man crew hurried into smaller vessels. Within weeks, the men ran out of water, food and hope of a rescue. As crew members began to die from starvation and dehydration, survivors turned to their bodies and bones as a source of nourishment.

Cannibalism has long been a taboo topic in the U.S., and European missionaries or explorers in foreign lands used the practice as an excuse to justify violence.

But it is common in the natural world. Animals hunt and eat their own kind out of necessity, due to environmental stresses, or simply because they like the taste. Scientists began studying cannibalism in the 1970s. Since then, they’ve learned more about how it occurs and whether there are limits as to who is off the menu. Researchers are finding that cannibalism isn’t a feeding frenzy. Depending on environmental factors, cannibalism can be predictable.

The first scientists to research cannibalism studied patterns among cannibalistic creatures. In 1981, a study in the Annual Review of Ecology and Systematics examined data from hundreds of studies regarding cannibalism, or “intraspecific predation,” as the author called it.

The author identified five main patterns among cannibalistic behavior. To start, the young were more apt to be eaten than mature adults. Eggs, in particular, were most vulnerable because they were both defenseless and nutrient-rich. Researchers observed cannibalism in almost every egg-laying creature from spiders to lizards, to birds. The study also found that many animals didn’t recognize their own kind. To them, an egg was just an egg.

The study also found females were more cannibalistic than males. When researchers observed both the sex of the predator and prey, they found females munched on males 88 percent of the time, and 76 percent of these were related to courtship and mating rituals. Killing a mate could benefit a female’s offspring. If a female devours the male after mating, she would eliminate any possibility for the male to mate with another female and create competition for her young.

And although cannibalism increased with hunger, scarcity wasn’t a requirement for the behavior. But cannibalism was directly related to overcrowding. The more an animal felt the pressure of overcrowding, the more likely they were to seek a same-species meal.

Since this ground-breaking study was published in the early 1980s, researchers have worked within the framework and found more nuanced behavior. Some species, for example, would rather not eat family members.

For some animals, cannibalism begins soon after hatching or birth, and their siblings are one of their early snacks. Researchers at the University of Jyväskylä in Finland were curious if the dyeing poison dart frog (Dendrobates tinctorius) had cannibalistic behavior. They are confined to small pools, which is an environment that can breed cannibalism.

Dyeing poison dart frog fathers take their tadpoles one by one and drop them in small pools of water. The tadpoles remain there until they undergo metamorphosis and hop away. These pools aren’t exclusive, and some older tadpoles might still be there. Any given pool can have tadpoles of varying ages and relatedness.

In a 2022 study published in Behavioral Ecology, the Jyväskylä researchers wondered if the dyeing poison dart tadpoles were as likely to eat a sibling as they would a stranger. In their laboratory, they created small pools and then made pairings of tadpoles that were either siblings, half-siblings, or unrelated. Researchers put plexiglass to keep the tadpoles apart and then put them together for observation.

If one of the tadpoles became too aggressive, as in biting for two seconds or more, researchers broke up the fight. The researchers found larger tadpoles were more apt to attack smaller ones, but full siblings were less likely to fight to the death. The concept of half-sibling didn’t have much meaning to the tadpoles, and didn’t stop aggressive behaviors.

In the wild, tadpoles with parental support, meaning parents who bring food to the pool, are less likely to turn to cannibalism to survive. If parents are slacking, the nutrition from eating a pool mate can support metamorphosis and help the tadpole leave the problematic pool sooner. The study concluded that family bonds have their limits, and although tadpoles are less likely to eat their own, they will if needed.

For animals like the dyeing poison dart frog, cannibalism in the early years can supply necessary nutrients. But research shows that cannibalism can also bring undesirable side effects.

Scientists are not in agreement about the impact that parasites and deadly diseases have on cannibals. Some argue that cannibals have a greater chance of exposure to deadly parasites or diseases when they eat one of their own. As in parasites evolve to successfully survive in certain species and develop defenses against the animal’s immunity.

Others suggest that cannibalism kills the infected host, thus limiting the parasite or disease and its spread.

Another downside to cannibalism is that it decreases inclusive fitness. Parents, siblings and offspring share their genetic makeup, and eating them means deleting more of the cannibal’s own DNA from the gene pool. For species that recognize siblings, it also means taking out others who might have recognized the cannibal as kin and spared them from a similar fate.