We Celebrate King Tut, But He Was Once Erased From Ancient Egyptian History

Archaeologists found King Tut's tomb on November 4, 1922. As we celebrate this anniversary, we also now know that King Tut was largely forgotten by his own subjects. 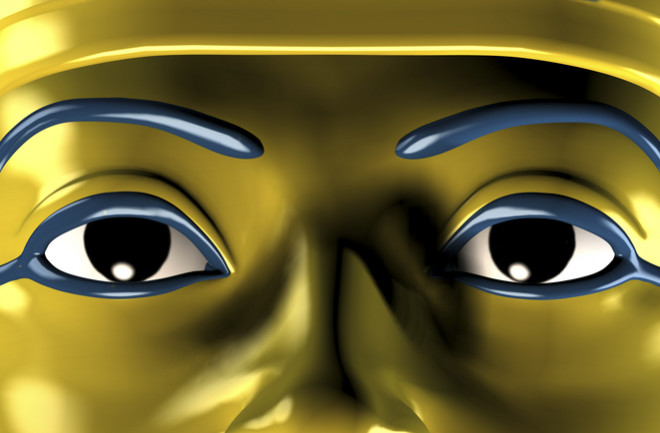 This article was originally published on June 21, 2022.

Who is the first Egyptian pharaoh that you can think of? For many people, the answer is of course Tutankhamun, better known today as King Tut. Since the discovery of his tomb on November 4, 1922, King Tut has become a global celebrity. Artifacts from Tutankhamun’s tomb have toured the world, inspiring folks from average school kids to U.S. President Herbert Hoover, who named his dog after the famous pharaoh.

The discovery of Tutankhamun’s tomb was one of the greatest archaeological finds of all time. Largely overlooked and untouched for centuries, the tomb contained over 5,000 artifacts, ranging from gold and jewelry to ritual funeral trappings and ordinary items the king used in his everyday life. When news of this bountiful discovery broke, it shook the world.

But what about the King himself? He must have been revered in his own day if he was buried with all this treasure – right? Quite the contrary.

Nearly a century after his tomb was discovered, much of King Tut’s life remains cloaked in mystery, including the most basic details. Who were his parents? How did he die? And whose tomb was he haphazardly thrust into after his premature death?

His reign was trenched in controversy. After his death, Tut was willfully forgotten by his successors, who literally erased him from monuments and official histories. So, what do we really know about the boy king?

Any understanding of King Tut’s story has to begin with his predecessor — the heretic pharaoh Akhenaten.

Akhenaten was a radical religious zealot who revolted against the Egyptian orthodoxy. He rejected the canonical Egyptian pantheon, led by Amun, the king of the gods, in favor of a kind of monotheism centered on a solar god, Aten, who appeared as the visible sun disc. This shift spurred changes in the nation’s art and culture — changes that were reviled by a large contingent of Egyptians.

Despite a general disdain for his religious revolution, Akhenaten had inherited a booming economy, and he leveraged the nation’s wealth to bribe elites, casting gold and glamour to anyone who swore fealty. He became an iconoclast, deploying his minions to remove any semblance of Amun from Egypt’s monuments and cities.

In his most radical move, the pharaoh changed his own name, from Amenhotep IV, meaning “Amun is pleased,” to Akhenaten, meaning “Perfect for the Aten.” He then moved his family to a new capital city, which he constructed from the ground up: Akhetaten, meaning “the Horizon for the Aten.”

As Akhenaten dismantled the Egyptian orthodoxy, he consolidated power and influence. He wrote hymns for his new religion and decreed that only he could pray to Aten directly; others must pray through him. He developed a self-glorifying art style where his depiction was always larger than Aten’s and where his form obscured the lines between man and animal, king and god.

Akhenaten became a totalitarian religious zealot, one who was loathed by his people. It was in this era of cultural unrest, and in Akhenaten’s heretic capital city, that King Tut was born.

Tut was originally named Tutankhaten, meaning “Living image of Aten.” His parentage remains contentious, but DNA evidence indicates that the boy was a child of incest. Although Egyptologists have proposed a handful of candidates for Tutankhaten’s father, most agree that he was Akhenaten’s son. His mother’s identity, on the other hand, remains hotly debated. Some researchers suggest that one of Akhenaten’s sisters was Tut’s mother. Others, like Egyptologist and UCLA professor Kara Cooney, believe that one of Akhenaten’s daughters may have served that role.

“We do know that he promoted his daughter [Ankhesenamun] to Great Royal Wife. So why not? It seems on point for the way patriarchies have worked, particularly exclusive dynastic patriarchy and how they keep power in the family,” Cooney says.

Egyptologist Chris Naunton remains on the fence until more evidence is unearthed. Naunton, a lecturer, broadcaster and author of several popular books on ancient Egypt, is hopeful that eventually archaeologists could discover Tut’s parentage in inscribed stones. “It is absolutely common for inscriptions to tell us who the king's parents are,” Naunton says. “There could be an inscription that turns up one day.”

Tutankhaten took the throne a few years after Akhenaten’s death when he was just 9 years old. As a child, he probably had advisors who pulled the strings, including Nefertiti who ruled previously as co-king with Akhenaten and as sole king immediately following his death. Their goal was clear: to reconcile with their subjects and restore the Egyptian orthodoxy.

Tut and his advisors reconstructed monuments to the old gods and abandoned Akhetaten for the previous capital city of Thebes. He changed his name to Tutankhamun, or “Living image of Amun,” marking a commitment to the old ways.

Ultimately, his attempt to reconcile with Egyptian norms fell short. Tutankhamun died after just 10 years in power. Even after his mummy was discovered in 1922, we still don’t know the cause of the young king’s death. Some working theories include genetic diseases stemming from his inbred parentage; a chariot accident; and a leg wound infected with malaria. But contrary to popular speculation, he was certainly not murdered by a blow to the head.

King Tut’s premature death led to a peculiar burial, which might have contributed to his tomb remaining hidden for over 3,000 years. Although he was laid to rest in the royal graveyard known as the Valley of the Kings, Tut’s tomb was tiny compared to the cavernous crypts of his neighboring pharaohs. It’s clear that the space was not originally meant for him.

“His tomb is smaller than just about any other. It’s much simpler than any other. It’s almost entirely undecorated,” Naunton says. “As soon as you enter the antechamber, you can more or less see the whole thing.” Finding out who the tomb originally belonged to remains “about as compelling a mystery as there is in ancient Egypt.”

King Tut had no children as heirs. His death left the throne vacated, to be claimed and passed around by military strongmen like a royal game of hot potato. The 18th dynasty would end with the pharaoh Horenheb, who usurped Tutankhamun’s monuments as his own, carving his name over Tut’s wherever he could find it.

“[Tut] was part of an excessive and radical regime run by Akhenaten,” Cooney says. The regime was so discordant that their successors wiped their legacy clean. “They didn’t talk about them, they’re not on kings lists, they’re not recorded in temple walls,” Cooney adds.

Just like that, Tutankhamun was virtually erased from history.

From Obscurity to Celebrity

Paradoxically, the unimportance of the king would, centuries later, enable archaeologists to make one of the most important discoveries of the era.

“The only reason that we discovered Tutankhamun’s tomb is that he was so unimportant,” Cooney says. Nearly every single tomb in the Valley of the Kings was robbed of its treasures in antiquity, but Tutankhamun’s tomb was spared. “They did not go to Tutankhamun’s tomb because it was covered with a couple hundred years of limestone, lost time, and chippings from the tomb of Ramses VI.”

Since the tomb’s opening, its artifacts have toured the world several times over, and Tutankhamun has achieved global stardom. No matter its size, the archeological discovery of a fully intact tomb was nothing short of spectacular, and its treasures continue to yield fresh findings to this day.

The irony is that Tut’s tomb and its contents are more well-known than the pharaoh himself. King Tut remains a mysterious yet somewhat pedestrian ruler, a footnote from a fanatical regime. We know very little about his reign, but from what we do know, his name certainly was not as beloved or renowned as he is today.

Cooney says that our obsession with a boy king, whose brief reign piggybacked on a wildly unpopular regime and who failed to reconcile with his disillusioned subjects, can help us reflect on our own values.

Cooney hopes that students of ancient Egypt view Tutankhamun’s legacy through a critical lens, questioning the ancient social systems that allowed a king to be revered as a god and a 9-year-old boy to be granted absolute power.

“The only reason a nine-year old becomes king of the most powerful and richest state in the ancient world is because his family is part of — and has to be part of — a system of inequality,” Cooney says. “It’s the unrepentant and positivist look at these kings and their treasure, without casting a critical eye to how they hoarded these resources, that is the dangerous part of the story.”

This Tomb Contains 10 Mummified Crocodiles From 2,500 Years Ago