Long before the first campfire was lit, early humans may have started as fire foragers, observing naturally occurring blazes and harnessing them for their own needs. 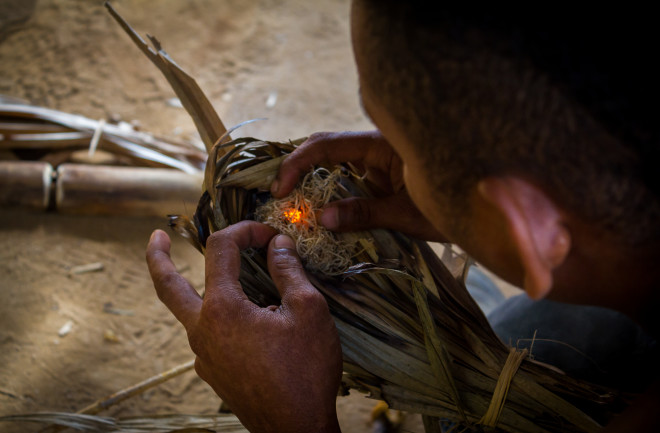 The ability to use fire forever changed the fate of the human race: For starters, it allowed our ancestors to cook foods, which made us much more efficient eaters. Instead of gnawing on nuts and berries all day, we could now cook animal meat, which packs much more of a caloric punch. We also used fire to make more effective weapons and tools. But there’s a lot we don’t know about when humans first encountered fire and its transition into effective, everyday use.

Still, we do know that our evolutionary kin were exposed to fire — or at least aware of it — about two million years ago, well before the arrival of modern humans, says John Gowlett, an archeologist who specializes in human fire at the University of Liverpool. This was around the time of Homo erectus, the first hominin with modern human proportions.

“At first, early humans were fire foragers, meaning they knew fire could be beneficial. When they encountered it on the landscape, they would watch or follow it,” Gowlett says. After encountering a naturally occurring wildfire, these early humans might have revisited the site to see what nature had cooked up for them.

In a 2016 review article Gowlett published in the Royal Society of Biological Sciences, he contends that the discovery of fire was a long process. “Early hominins would undoubtedly have been aware of fires, as are savanna chimpanzees in the present,” he writes. “Rather than as an event, the discovery of fire use may be seen as a set of processes happening over the long term.”

The next step after fire foraging would have been extending fires that were already in existence. This means that these early humans were not only aware of fire, they also learned to use it to their benefit. They may have used it to light a stick or branch, for example, and then ignite their own fire. “They also might have been using charred animal dung as fuel for fires,” says Gowlett.

Additionally, early humans may have used in-ground tree root systems — which stay warm for days after a bush fire — as a sort of natural oven. Admittedly, scientists don’t know exactly when this would have happened, as the phenomenon is hard to track with archeological evidence.

The evidence for humans making fires themselves (and cooking more regularly with them) suggests it first started around 800,000 years ago, with some researchers speculating it began as early as 1.5 million years ago. It’s around this time that humans begin to cook and gather around fires.

Once humans started cooking regularly, our gut and teeth morphology began to change to be better suited for cooked foods, according to Harvard anthropologist Richard Wrangham. Wrangham argues that once humans were living out on the African Savannah instead of in the trees, they learned to eat and cook the foods that were available — tubers underground and meat from animals, both of which are easier to digest when cooked.

Modern humans, says Gowlett, largely can’t live without cooked foods for any length of time; that’s likely an adaptation that only came after we learned to cook effectively with fire.

It wasn’t just humans who regularly used fire, says Filipe Natalio, an archeologist at the Weizmann Institute of Science in Israel. Neanderthals were likely just as advanced in using it to cook and make weapons, he says, with Neanderthals tending to their flames in Europe while modern humans cooked in Africa. They came together and were both cooking by the time they were in the Levant, says Natalio, referring to the eastern Mediterranean area now covered by Israel, Lebanon, part of Syria and western Jordan.

Additionally, archaeologists have found evidence from that era of sophisticated tools made using fire. About 400,000 years ago, modern humans and Neanderthals alike were using fire to produce blades. By this time, they had also learned to control the temperature of the fire so that the tools they were making wouldn’t explode in the direct heat of the flame. “Once humans moved from Africa to the Levant, they were hunting smaller animals that required blades to remove all the meat,” says Natalio.

As modern archeological technology continues to evolve, scientists can go further and further back in our collective history. And according to both Gowlett and Natalio, archaeologists keep finding older sites showing that fire has been around even longer than previously thought. Considering that chimpanzees are aware of fire, it would make sense that our earliest hominin relatives would have been, as well.