At 45,500 Years Old, This Ancient Cave Painting Tells Us About Early Humans

Not knowing if it was made by Neanderthals or Homo erectus, these symbols on caves at least 45,500 years ago are a surprising finding on the Indonesian island of Sulawesi. 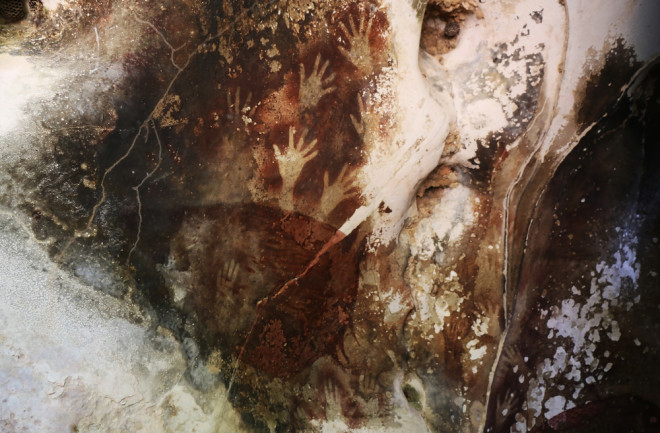 Since the 1950s, images and hand stencils like the ones shown here have been found in caves on the Indonesian island of Sulawesi. (Credit: Naj Ativk/Shutterstock)

This article was originally published on April 16, 2021.

In 2018, researcher Maxime Aubert and his crew ventured into a hidden valley about an hour’s walk from the nearest road on the spider-like Indonesian island of Sulawesi. They had just slept on the porch of a local family’s rice farm after a few glasses of ballo, a fermented sugar palm alcohol that the area is famous for.

Just across the valley, Aubert, an archaeologist and geochemist at Griffith University in Queensland, Australia, could glimpse the Leang Tedongnge cave. The team traveled to see it after hearing reports from Basran Burhan, an Indonesian archaeologist. Aubert, who studies ancient cave art, had previously studied what were possibly the world’s oldest-known manmade examples from as long as 44,000 years ago — but, as he would later learn, the art here at Leang Tedongnge would date back even further.

Soon after, Aubert and his colleagues entered the Leang Tedongnge cave, which was used by the nearby family to store farm equipment. Just above a small ledge inside, they found a drawing of three pigs painted in red ochre, shown with plenty of hair and warts. Above the pigs appeared two stencils of people’s hands. The illustration may have depicted a fight, Aubert says.

The area’s residents didn’t even know they existed. In fact, they thought someone must have snuck in overnight and left some graffiti. “The rock art is just there in the back of someone’s rice paddy,” he says. “There’s just so much of it.”

Just as intriguing as the images themselves, Aubert took a close look at the calcite that had built up on one of the pigs’ legs. Uranium-series isotope dating of the calcite revealed it was at least 45,500 years old — making it the world’s oldest human cave art discovered so far.

This revelation was surprising because researchers have previously found most ancient cave art in Europe. Sites like France’s 30,000-year old Chauvet Cave are famous for their overlapping horses, groups of rhinos and other bunches of animals. In recent years, Aubert and other archeologists have turned back the clock on the beginnings of human art, with a number of high profile discoveries in Indonesia within recent decades.

Once it’s found, though, interpreting cave drawings can be tricky because it’s impossible to get into the minds of the original artists. But researchers have proposed a number of explanatory theories, including everything from the development of early storytelling to the roots of spirituality. Dating the art can also reveal a timeline of our ancestors’ early cultural development, one of the key traits that later allowed our species to succeed. “Rock art is an intimate window into the past,” Aubert says.

It’s difficult to determine the significance of early cave art: We can’t get into the heads of the people who made it, and they aren’t around to tell us.

Some evidence shows that Neanderthals may have drawn hand stencils in Spanish caves from about 65,000 years ago, though Aubert says this dating is disputed, and may be much younger and not from Neanderthals at all. And the oldest known zigzag-shaped doodle may not have come from modern humans but our ancestors, Homo erectus, on a mussel shell some 500,000 years ago. But what exactly constitutes art remains an open question.

“The answer is probably, in the earliest art, people didn’t know what they were doing,” says Iain Davidson, a retired professor of archaeology at the University of New England in Australia.

Most of the ancient sketches in both Europe and Indonesia involve large mammals or hand stencils. The former may have represented some of the species that people hunted, but much of the other prey animals found in archaeological deposits weren’t included in these pictures. Therefore, these specific shapes may have been important in some spiritual sense, Aubert says. Also, the handprints could have been a way that people once identified themselves.

It isn’t until about 20,000 years ago, at the height of the last glacial maximum, that humans popped up more in paintings. While it’s unclear why, Aubert says that there must have been a global driver for this, possibly involving climate change.

The first narrative scene may have arrived with ​Leang Bulu’ Sipong 4, a cave discovered in 2017 that Aubert has since studied. Also located in Sulawesi, this art is at least 43,900 years old and shows a series of hybridized animal-human figures hunting pigs. “It’s the first evidence of storytelling,” Aubert says. “The narrative scene was special because I’ve never seen anything like it.”

He compares this to other early anthropomorphic figures, such as the lion man ivory carving figure dating back between 35,000 and 40,000 years ago that was found in the Hohlenstein-Stadel cave in Germany. This shows us that the artists were not only telling tales at this time, but conceiving things that didn’t actually exist in the real world. “That’s the root of religious thinking,” Aubert says.

Some researchers claim that these hybrid animal-human figures represent shamanistic beliefs. But Davidson believes you can’t use such a broad brushstroke when examining anthropomorphic drawings, and not all things should be quite so generalized. To him, figures like the lion carving could represent rituals, like people dressing up as animals while hunting. Still, he says, it’s difficult to say for certain.

In general, there are two ways of thinking about the spread of cave art. One is that it started in a single region and gradually spread to other continents. If the current discoveries represent the actual oldest versions, it would mean that cave art originated in Indonesia at least 45,000 years ago, then found its way toward Europe over the next 10,000 years.

In contrast, some archeologists think cave art may have independently developed in multiple areas simultaneously. Davidson subscribes to this belief, suggesting that the various traditions developed in Indonesia and France without any connection. And there’s likely a lot more out there to uncover, he says.

After the discovery of Altamira Cave in Spain in the late 1800s, researchers fixated on European cave art. In the past century or so, France in particular has received a significant amount of attention. “We tend to put too much emphasis in the French caves,” Davidson says. “There are 120 of them—it’s not a huge number given the length of time people have been looking for them.”

The Indonesian caves, however, were relatively new revelations. Since Aubert and his colleagues only dated calcite that formed on top of the art rather than the ochre itself, the paintings themselves might be much older. We know that modern humans arrived in Australia around 65,000 years ago, and that they likely came through Indonesia (after spreading from Africa through the Middle East). It’s possible that cave art developed along the way, or that earlier samples in Africa haven’t survived — or have yet to be found.

So far, only a few uncovered etchings date significantly far back in Africa, including the Apollo 11 Cave in Namibia that contains some slabs with animal drawings from 30,000 years ago. But there could be plenty others out there. African caves have to be taken seriously, Davidson says.