What Happens When You Find Ancient Artifacts Under Your House?

Some home renovations can turn up archaeological wonders, including a recent find in St. Augustine, Florida. 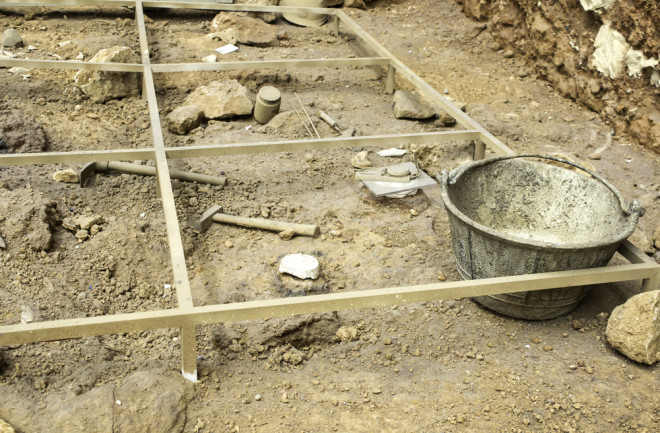 By many definitions, a home is a permanent dwelling. But that’s only true if the people living there are still alive. Humans have been around long enough that many homes now sit on top of ancient civilization ruins.

For archaeologists, the ruins that might lie under your home are a point of fascination. But what when evidence of the previous home dwellers from centuries earlier turn up while digging a hole to make renovations?

The cities with the longest history are often the places where ancient remains are most likely to turn up under your flower garden. In cities that go back millennia such as Istanbul or Athens, the remains of foundations for ancient houses or even temples sometimes turn up in digging projects.

In Turkey in 2017, house construction turned up a hidden staircase that led to a chamber full of Neo-Assyrian deities dating back roughly 2,800 years ago. In Jerusalem several years ago, a family found an ancient ritual bath under their living room dating back two millennia.

While places in the U.S. lack the millennia-old constancy found in the Old World, some areas were inhabited for centuries. This includes St. Augustine in Florida, which was founded in 1565.

Recently, contractors were going to stabilize the foundation of a house in St. Augustine that was part of an orange grove dating back about two centuries. As part of St. Augustine’s municipal guidelines, both public and private properties must conduct an archaeological survey of areas before digging for home construction or renovation projects.

But instead of finding foundation material, the contractors found post holes, pottery shards and other artifacts dating roughly to three centuries ago. This was a time when Indigenous societies were setting up mission villages, many of them with refugees from a war raging between the British and Indians to the north.

“We thought we would find things related to the construction of the house, not 100 years earlier,” White says.

Researchers determined that they were likely seeing the remains of San Buenaventura de Palica, an Indigenous mission that sat near St. Augustine until roughly the mid-18th century. The Spanish, who still controlled St. Augustine at the time, set up Catholic missions as part of a mechanism to control Indigenous people in the New World, White says. Other Indigenous people likely joined the missions as a way to escape conflict with the British, including the Yamasee War that involved many Indian Tribes in South Carolina from 1715 to 1716.

“Everyone is working [the mission system] for different advantages,” White says.

The British would attack Spanish missions, and some were driven back towards St. Augustine, a Spanish control center. Palica was one of these missions, and historical maps indicate that it was roughly in the area where the orange grove was.

Read more: The 6 Most Iconic Artifacts From The Ancient World

Initial analysis of the pot shards also revealed that the people that lived in this site were likely Mocama, a Tribe of Timucua-speaking people, White says. The mission at Palica was divided into neighborhoods of Mocama and Yamasee. Spanish friars at the time recorded census information about the people in the missions, which has given archaeologists clues as to what Tribe the people came from.

The site at the orange grove has revealed pottery pieces, post holes that would have represented the foundations of dwellings, and some animal remains. These remains, and the styles of artifacts of European origin, put the date at roughly the early 1700s, though many of the artifacts haven’t yet been analyzed as they were excavated relatively recently.

Should You Worry About Remains Under Your Home?

Old cities like Rome or Jerusalem have strict regulations on digging under properties due to the relatively high likelihood of discovering ruins or other remains. But St. Augustine is an exception to the rule in the U.S. In most cases, the discovery of archaeological remains won’t stop a builder or development project, White says.

“People are always fearful that the government is going to come take their property,” she says.

If human remains are discovered underneath, the situation can get trickier, as Indigenous groups or other potential descendants might get involved. In these cases, White says, someone must decide to either exhume the remains or preserve them where they are.

“Each outcome is different in that rare case,” she says.

For the owners of the orange grove house in St. Augustine, they were trying to preserve the property to seek federal tax credits by declaring it as a heritage house. And they weren’t that upset when the archaeological survey found the remains of an even older settlement underneath.

“Otherwise, we would have totally lost this history and not known anything about this native American mission under the house,” White says.