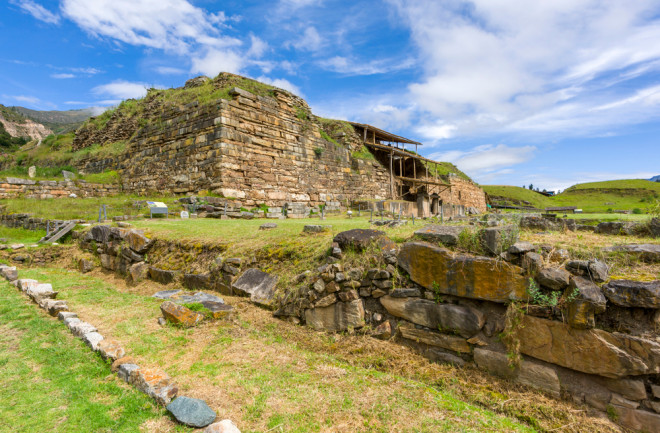 The Lanzón stela has sat among tunnels under ancient ruins in the Peruvian Andes for more than two millennia. This 15-foot, humanlike stone sculpture was installed under the temple of Chavín de Huántar. It appears to feature arms and legs — along with snakes for hair and massive fangs.

“It’s a monstrous representation with human and animal elements,” says Richard Burger, an archaeologist at Yale University who has studied Chavín de Huántar and its culture for several decades.

The Lanzón hasn’t budged since it was first fixed between the floor and ceiling at least 2,500 years ago. Rope depictions that emerge from the top and bottom could represent its vital importance in connecting the heavens and Earth, Burger says. This figure likely depicted a deity.

It’s unclear what exactly transpired within the temple, which sits at more than 10,000 feet in elevation, but archaeologists believe ceremonies involved everything from human sacrifice to the ritualistic consumption of powerful psychedelic drugs. And some elements of Chavín culture likely influenced subsequent Andean civilizations, including the Wari, Tiwanaku and Inca, for centuries afterwards.

“It’s a remarkable site — I don’t think here’s anywhere else on Earth that’s like it,” Burger says. “It’s just sort of a magical, powerful place.”

Unlike plenty of other famous archaeologist sites that were lost or buried over time, Chavín de Huántar has seen continuous use for centuries. Until at least the 1930s and 1940s, the site continued to play a significant role in ceremonies. When archaeologist Marino Gonzalez Moreno began managing it over 70 years ago, he walled off the complex to prevent people from entering and conducting rituals. When that didn’t work — people just climbed over — he tried an approach that appealed to spiritual inclinations.

“He cut off the legs of a bunch of animals and he dipped them in blood,” Burger says. “He put the hoof and footprints of the animals around the walls of the perimeter of the site so that people would think supernatural forces were at work.”

Gonzalez Moreno had taken over the role from another archaeologist, Julio Tello, who decided during a visit to the site in 1919 that it represented the crux from which all later Andean civilizations developed.

In subsequent decades, archaeologists came to dispute Tello’s idea that Chavín represented the dawn of Andean civilization: After all, Chavín appears to have incorporated some elements from prior regional cultures like the Pukara and the Norte Chico (also known as the Caral or Caral-Supe Civilization).

But the builders and artists of Chavín also developed a unique and original style when they established the site around 950 B.C., according to a recent study by Burger.

Carvings depicted a number of animals from across the region, including jaguars, anacondas and other serpents from the tropical forests to the east — and even the occasional monkey or caiman figure. There are also depictions of raptors that could represent harpy eagles.

“In Chavín you don’t have any of those things,” Burger says, adding that people clearly traveled from long distances to reach this temple, which is often thought of as a center of pilgrimage.

Visitors would have brought goods to trade, along with offerings. Remains unearthed at the site include conch shell trumpets from Ecuador, cinnabar (a bright red pigment) from south-central Peru and obsidian from Ayacucho in southern Peru.

“There are a whole series of different items that are being brought from hundreds of kilometers,” Burger says. “What makes it so important is that it’s the first time that you have a pan-regional development in the Andes that’s not a series of small vulcanized local developments. Chavín serves as a center where people are coming from all over the central Andes.”

The settlement surrounding Chavín held at least 3,000 people, and it had signs of social stratification in which some had access to rare goods and technology that others lacked. “It was urban by the criteria of the time,” Burger says.

And the practice of llama herding, which might have played an important role in transporting goods to and from Chavín, could also have started in the area. “Even though the llama had been domesticated very early, it didn’t really spread out from the high grasslands until you get to Chavín times,” Burger says. “It spreads to lower elevations so farmers could use them.”

The layout of the temple provides some clues as to what occurred there. The main structure of the site includes a flattened pyramid with a circular plaza beneath it: Both the roof and the lower plaza could have been used for ceremonies, Burger says. The structure of some of the passages leading to the roof could enable priests or other figures to seemingly emerge from nowhere.

“They were trying to create a sense of mystery,” Burger says. “People would appear on the roof or in these sets of inset balconies.” Depictions at Chavín show priestly figures marching in elaborate garb with crowns and headdresses, and some have animal-like features. One figure, known as the Raimondi Stela, that’s thought to have come from Chavín appears to be holding psychedelic San Pedro cacti. “That gives you an idea of the kinds of ceremonies that happened,” Burger says.

Snuff spoons likely used for inhaling hallucinogenic powders and mortars for grinding such substances have been found at the site. Burger also identified a psychedelic substance that likely came from the Andenanthera colubrine tree, and it’s still used today for the beans’ hallucinogenic properties.

What’s more, the inside of the temple is dotted with labyrinthine passages. Human bones found in one of these galleries seem to have been cut up, and some archaeologists have suggested they might represent a cannibalistic ritual, Burger says. But while a sacrifice may have occurred, there isn’t enough evidence to prove the practice was central to the culture as it was with the Aztecs, Burger says. Other galleries may have been just used for storage, or for monastic cells that held Chavín cult initiates, he speculates.

While these grounds have been used for ceremonies within the last century, Burger determined that the main temple was abandoned by 400 B.C. At that point, the urban center’s population collapsed and the nature and style of the pottery and other artifacts at the site seemed to shift. Still, some people continue to live there today. “Most of the elements of Chavín disappear after the collapse,” Burger says.

But their penchant for grand architecture lived on and was reflected in later cultures that inhabited the broader region, such as the Moche, Wari and Inca. “By bringing all these different groups into contact with each other, various technologies ended up being spread and a certain degree of cosmopolitanism ended up being spread,” Burger says of Chavín.