New discoveries about Mesozoic mammals challenge the classical picture of small, insect-hunting, vulnerable animals that lived in the Age of Dinosaurs. 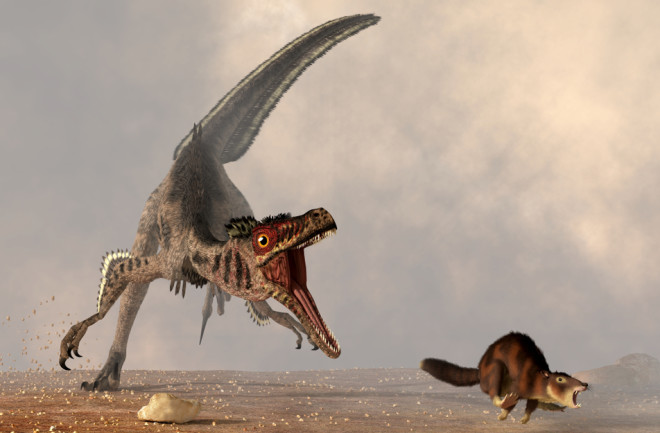 Mammals are very ancient beasts. The earliest known members of our fuzzy family date back to about 225 million years ago, a time when dinosaurs themselves were newcomers on the evolutionary stage in the Triassic. Naturally, through the fossil record, we know that the “terrible lizards” soon went on to thrive on every continent in every shape and size — and are still with us as birds.

Mammals, on the other hand, are often treated as evolutionary underdogs during this vast span of time. The mammals of the Triassic, Jurassic, and Cretaceous, the stereotype goes, were small, insect-hunting creatures that tried to evade dinosaurs in the dark. That classic image is all wrong.

Mammals did not attain the same range of sizes as dinosaurs during the Mesozoic; but size isn’t everything. “Mammals still exploited a whole range of ways of living and feeding,” says University of Bristol paleontologist Pamela Gill. This included swimming in water and gliding from tree to tree.

Little by little and fossil by fossil, paleontologists have come to realize that mammals were incredibly varied creatures with their own ancient success stories. The old tale of mammals eking out a living under the talons of rapacious dinosaurs until the asteroid struck doesn’t hold up. An entire menagerie of mammals flourished alongside dinosaurs, including some that even ate baby dinosaurs for lunch. “What we think of as the Age of Mammals, after the end of the Cretaceous, is only one third of mammal evolution. There was about 200 million years before that,” Gill says. Paleontologists are continuing to uncover more about those earlier, critical chapters.

The Dawn of Mammals

Before proceeding, it’s worth noting that what counts as a mammal and an almost-mammal in the fossil record can be a little tricky. Paleontologists often consider mammals to include the last common ancestor of all living mammals – including egg-layers like the duck-billed platypus – and their descendants. These mammals lived alongside close relatives that would look very mammal-like to our eyes but are technically categorized as mammaliaforms, or a slightly more archaic branch of the evolutionary tree just outside of the classic mammal designation. Such technicalities aside, however, both mammals and mammaliaforms did very well during the Mesozoic.

Read More: Why Did Our Mammal Ancestors Stop Laying Eggs?

The Mesozoic was an incredibly long time period that saw innumerable species come and go. Mesozoic mammals were sometimes different from what we might expect. One of the earliest mammals was the mouse-sized Morganucodon, which looked something like a shrew. Despite its familiar appearance, though, “Morganucodon had not yet acquired the mammalian physiological advances in regulating body temperature, what we call endothermic or warm bloodedness,” Gill says. Instead, Morganucodon had a slower and almost more reptilian physiology that allowed them to live as many as 14 years – seven times longer than a mouse of similar size today. At the time, Gill notes, Morganucodon was likely able to go into torpor during harsh winters or adverse conditions, allowing these early mammals to get by on less. It was only later that mammal became synonymous with warm-blooded.

While not quite at the same rate as dinosaurs, paleontologists are still describing new mammal species each year.

Earlier in 2022, for example, experts described an archaic Jurassic mammal – technically called a mammaliaform – from China. Named Microdocodon, this beast was preserved with tiny throat bones called hyoids that assist in suckling. The find indicates that the ability to suckle and feed on milk evolved before the last common ancestor of today’s mammals.

That notion has been bolstered by additional discoveries, such as research that indicates roughly squirrel-like mammals called multituberculates had a life history like that of our own close relatives where infants suckled on milk for a short time before becoming independent and striking out on their own. And given that multituberculates existed for over 100 million years, most of that during the dinosaurian heyday, their success speaks for itself.

That’s hardly all. The tally of Mesozoic mammals also includes beasts with beaver-like tails that chased fish in ancient lakes, Jurassic flying squirrel-like creatures, plus mammals that used their powerful forelimbs to tear apart termite nests, and even a badger-like species – called Repenomamus – that’s been found with baby dinosaur bones in its gut contents. Through swimming, gliding, climbing and burrowing, mammals often expanded into ecological roles that dinosaurs did not, undoubtedly assisted by how wonderfully variable mammal teeth can be.

Just like us, most mammals and mammaliaforms had a varied dental toolkit. Incisors for nipping and gripping, canines for piercing, and cheek teeth for slicing, grinding, crushing, or all three. And mammals could chew.

“A very important change early on, and one which defines being a mammal, was developing teeth which occlude, or fit together to slice food efficiently,” Gill says. Dinosaurs, by contrast, often had relatively one kind of tooth throughout their mouths. Predators had teeth for puncturing, herbivores had teeth for grinding, and so on. But beasts were able to evolve many different diets and lifestyles, giving them flexibility that’s allowed them to survive since the Triassic.

In the big picture, mammals would even repeat some forms through time, a type of convergent evolution that has happened time and again throughout history, as mammals carry out similar ecological roles. “This type of convergence is common among mammals in general,” says Brown University paleontologist Christine Janis.

We’re part of this story, too. Our own early primate ancestors lived while dinosaurs were still at their apex. A tiny mammal, called Purgatorius by paleontologists, is the earliest known primate — identified from a smattering of bones and teeth found in rock layers both before and after the asteroid impact 66 million years ago.

Read More: Two Asteroids May Have Wiped Out The Dinosaurs

This little omnivore would have scrambled through the trees over the heads of Tyrannosaurus and survived where the non-avian dinosaurs did not. In fact, without dinosaurs roaming everywhere, mammal evolution probably would not have spun off small, bug-hunting mammals that ran through the trees — or any of the many species that we often don’t notice. “The average mass of a modern mammal is under a kilogram,” Janis says, meaning “mammals are mostly doing today what they were still doing in the Mesozoic.”

Our stories are connected, and we are only just now gaining a deeper appreciation for the mammalian half of it.

Dogs May Be Key in Early Bladder Cancer Detection