These 7 New Dinosaur Species Were Unearthed In 2022

From carnivores to herbivores, experts find around 50 new species of dinosaurs each year. Here are seven of those finds for 2022. 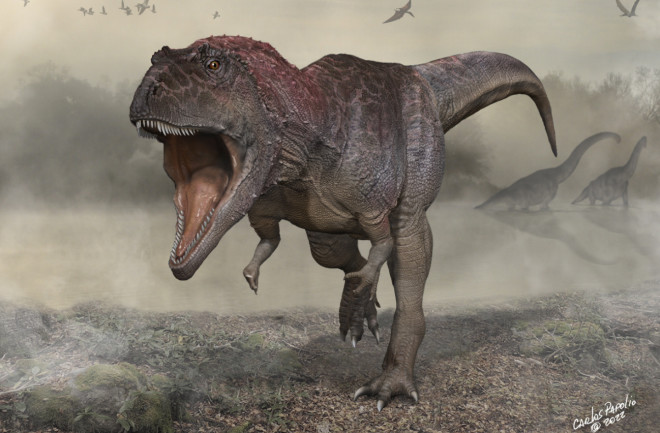 Dinosaur fans get to celebrate the discovery of around 50 new species each and every year. From new finds at dig sites around the world to deeper analyses of existing fossils, in 2022 paleontologists identified spectacular giant herbivores, stubby-armed carnivores and more. Below, take a peek at some of the most exciting new dinosaurs described so far this year.

Paelontologists in Argentina unearthed a partially complete skull belonging to a stubby-armed abelisaurid. Many of these “armless” dinosaurs possessed even smaller forelimbs than the infamously short-handed Tyrannosaurus rex. It would have roamed during the Late Cretaceous.

Researchers found the skull in the Los Blaquitos Formation in the Northwest of Argentina, though most of the country’s existing abelisaurids have been uncovered in the South, in Patagonia. The new species of carnivore is also smaller than others of its kind, such as the Carnotaurus, according to the paleontologists who made the discovery. In fact, it’s one of the smallest abelisaurids discovered so far.

The bipedal Jakapil kaniukara is a newly described small, armored dinosaur also discovered in Argentina. Dating from the Cretaceous, the approximately 5-foot-long Jakapil sported bony armor on its neck and back; its discovery makes it the first armored dinosaur from this period to be discovered in South America. The species belongs to the thyreophoran group, which includes other, more famous, juggernauts such as stegosaurus and ankylosaurus.

This year, researchers discovered an early ancestor of the towering and lumbering sauropods — a group that includes giants such as the brachiosaurus — in Zimbabwe. Mbiresaurus raathi, however, was a smaller and quicker omnivore. Measuring at around five meters long, it belongs to the sauropodomorph family that gave rise to giant and better-known dinosaurs such as Diplodocus.

Scientists described the nearly complete fossil (lacking only parts of its hands, its ankle bone and skull fragments) in the journal Nature. It takes the title of earliest known dinosaur found in Africa so far, dating back around 230 million years to the late Triassic.

In August, paleontologists announced the unearthing of a new, nearly 40-foot-long sauropod in Colombia, based on a well-preserved fossilized vertebra. This medium-sized dino would have roamed tropical lowland forested areas during the early- to mid-Jurassic, about 175 million years ago, according to the researchers' description.

Perijasaurus lapaz takes its name fromSerranía del Perijá — where the bone was found — and the Spanish word for peace, as the scientists attribute its discovery to the 2016 peace accord that allowed them to carry out fieldwork in the region.

With an awesome wingspan stretching up to 30 feet, Thanatosdrakon amaru is now the largest pterosaur discovered in South America. Pterosaurs are not actually dinosaurs, but rather flying reptiles. Paleontologists based their newest finding on two specimens found in Argentina, dating from the Cretaceous period, around 86 million years ago.

“Thanatosdrakon is the oldest taxon of the clade Quetzalcoatlinae so far,” the study authors noted. “[F]rom a paleoecological point of view, Thanatosdrakon was found in floodplain deposits of ephemeral meandering systems indicating that this large flying species inhabited continental environments.” Though Thanatosdrakon was freakishly large, it is not the largest of its kind; the enormous Quetzalcoatlus northropi claims that honor.

Sometimes a new dinosaur is right under your nose … or in the case of paleontologists in Germany, it is stocked in a university collection. Reexamining fossils held by the University of Tübingen, researchers announced the discovery of the herbivorous Tuebingosaurus maierfritzorum.

Previously, its fossils were thought to belong to the bipedal Plateosaurus. But deeper analysis uncovered that T. maierfritzorum almost certainly walked on four legs and is likely related to sauropods, such as Brachiosaurus and Diplodocus. Scientists were tipped off by the specimen’s “broader and more strongly-built hips,” which suggest a life on four legs rather than two.

Paleontologists logged another short-limbed carnivore this year in Northern Patagonia. From tail to snout, Meraxes giga is thought to have measured around 36 feet long and to have weighed nearly 9,000 pounds. Also dating from the Cretaceous, this member of the Carcharodontosauridae family had stunted arms like the infamous T. rex. (But that didn’t prevent it from chowing down on large herbivores.)

Thanks to this specimen’s almost complete skeleton, paleontologists are learning much more about Carcharodontosaurid feet and forearms, as well as the group's evolution. This group’s facial features, for example — including small horns and crests — were probably meant to attract mates.

How the Age of Reptiles Began 250 Million Years Ago