Although the oceans are already changing, advocates say it’s not too late to do some serious damage control. This includes the decline of global fishing stocks. 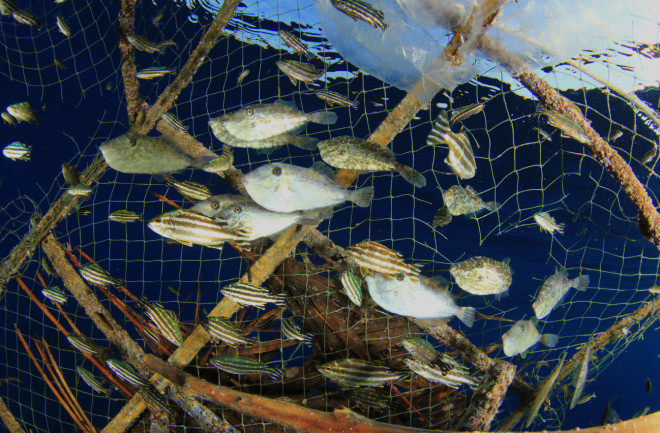 Atlantic cod, halibut and salmon. All three pair nicely with a lemon-butter sauce, a side of pomme purée and a glass of white wine. Yet no matter the preparation, a fresh catch from New England’s coastal waters is always enjoyable — and perhaps a bit too much. These seafood staples are now on the U.S. government’s list of depleting fish stocks.

On a global scale, advocates say depleting fish stocks are the most urgent threat to oceans and immediate change is needed. In some waters, consumer demand for certain seafood is to blame for the smaller stocks; in other areas, environmental issues are harming marine life. Either way, it’s a complicated problem to solve because it involves a whole host of nations, organizations and research institutes.

Depleting fishing stocks are the result of both overfishing and being overfished, which, according to the National Oceanic and Atmospheric Institute, are two separate problems.

Overfishing happens when individuals or industries take more fish out of the water than can be reproduced. This can be managed and even resolved with government-mandated fishing limits. Being overfished, on the other hand, can also involve heavy fishing — or it can be the result of environmental issues such as pollution, climate change or degradation to the stock’s environment. If these issues persist over time, repairing a depleted stock might not be possible.

Although NOAA manages 460 stocks in the U.S., only about 70 percent have a known overfishing status and 55 percent a known overfished status. At the end of 2021, there were 26 stocks on the overfishing list. These included cobia and lane snapper from the Gulf of Mexico; red snapper, red grouper and snowy grouper from the South Atlantic; chinook salmon, coho salmon and pacific sardine from the Pacific; and the blue king crab and snow crab from the North Pacific.

In New England, the aforementioned Atlantic halibut, salmon and cod were all on the overfishing list as well. But many fish stocks, including the Atlantic cod, were on both the overfishing and overfished lists.

Depleting fishing stocks are seen in waters around the world. In the European Union, for example, overfishing affects at least 40 percent of Northeast Atlantic fish stocks. In the Mediterranean and Black Seas, 87 percent of stocks endure the same.

Advocates argue that government subsidies are part of the problem. In 2018, governments around the globe spent $22 billion in public money subsidizing the fishing industry. About half of these subsidies were then used to fish in grounds that would otherwise be unprofitable.

But addressing the problem isn’t as simple as telling fishing vessels to limit the amount of fish they pull from the water; about 64 percent of ocean waters are beyond national jurisdiction, and these waters are dominated by boats from just a few countries.

Additionally, many nations hesitate to enforce fishing limits anyway. Why? Seafood is a major menu item for 3 billion people and political leaders don’t look forward to the task of replacing the missing protein source. Given that the fishing industry employs 60 million people worldwide, leaders would also have to address unwanted economic problems.

Still, environmental advocates warn that change will be inevitable if fishing stocks continue to deplete. And these changes could bring bigger problems than missing marlin in a meal.

Overfishing disrupts ecosystems and can make oceans less resilient to change. While the oceans are already enduring increased temperatures from global warming, researchers have found that areas with depleted fish stock show less ability to cope with global warming.

Scientists have also noticed that depleting stocks are actively pushing more species toward extinction. A 2021 study in Current Biology found that overfishing threatened a third of all sharks and rays with extinction. Its authors concluded the harm from depleted stocks was greater than the threat of pollution, climate change and habitat loss — combined.

In addition to harming marine life, scientists say depleting stocks also have the potential to harm already fragile coral reefs. Healthy coral reefs depend on herbivorous fish, which munch on the algae and sediment that would otherwise blanket the reefs. Yet these fish are at risk for succumbing to the stresses of overfishing.

Although the oceans are changing, advocates say it’s not too late to do some serious damage control. Groups like the Marine Stewardship Council encourage concerned citizens to pressure their government leaders to support sustainability initiatives, end fishing industry subsidies and set limits on how much stock can be pulled from the water.

Concerned consumers can also be proactive by researching which stores and retailers engage in sustainable practices. The MSC, for example, has a list of retailers and brands that meet their sustainability standards. The council also has a blue label program that helps consumers to recognize certified products while perusing the grocery store.

Because in the end, simply paying attention while at a seafood department or restaurant enables everyone to enjoy that nice fish entrée with the lemon butter sauce, without contributing to depleting fish stocks.

When People Vandalize Art, Conservators Come to the Rescue