The Modern Lives of Ancient Symbols

From Kokopelli to the Eye of Horus, some icons popular today have lost their original meanings. 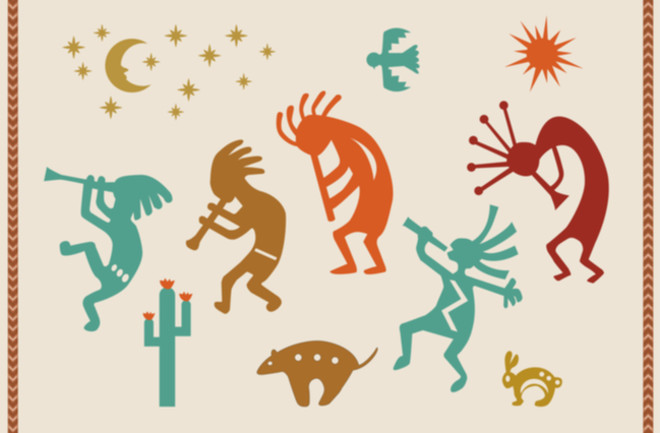 Millennia from now we’ll be gone, but symbols from 21st century culture may endure. Perhaps a future civilization will add golden arches to their flag after discovering ruins from McDonald’s. Or rebels will sport uniforms with red octagons and undecipherable ancient script. And a religious cult will worship a green goddess, who bears striking resemblance to the maiden on Starbuck’s logo.

Kokopelli: Flute Player of the Southwest

The humpbacked stick figure known as Kokopelli toots his flute all over the American Southwest. The ubiquitous image adorns everything from billboards and buildings to tee shirts, trinkets and tattoos. Pop culture portrays him as a free spirit, jamming, with hair styled in a mohawk or dreadlocks.

What’s become the Southwest’s icon derives from flute player figures etched on rock art and pottery by Native American peoples between roughly A.D. 600 and 1600. Both the pop culture name — Kokopelli — and its G-rated rendering differ from the Indigenous originals.

The ancient images generally show a flutist with an arched back, an archetypal character from diverse Native American traditions, who had powers over agricultural and sexual fertility. Beyond that basic template, though, depictions vary. Some flutists look manlike with prominent, protruding penises (apparently too racy for gift shop coffee mugs). Other flutists resemble feathered birds or insects with antennae, which have been misunderstood as dreadlocks by modern non-native Americans. And, on closer inspection, some of the hunchbacks are actually backpacks full of seeds.

Variously alone, in pairs or in groups, these flute players dance, parade, hunt and have sex in hundreds of scenes rendered on rock surfaces by Indigenous peoples. Most of the rock art is located in Arizona, New Mexico and Utah, but Kokopelli-like figures have also been found at sites in neighboring states including Colorado and Texas, as well as south of the border in Mexico.

Based on the figures' age and geographic spread, many (but not all) flutists were made by ancient Puebloan cultures and their descendants, including Hopi and Zuni peoples. But that doesn't mean the flute players represented a single deity conceived by one Native American tribe. Rather, different groups within this broad cultural sphere depicted their own versions of the character: One who roves village-to-village, conjuring harvests and seducing women with a magical wind instrument. Depending on the tale, the flutist was a minstrel, shaman, trader or trickster.

The "world's largest Kokopelli" is outside a Starbucks in Arizona. (Credit: cogdog, CC BY-SA 3.0 via Wikimedia Commons)

As for the name: “Kokopelli is based on a misunderstanding,” wrote linguist Ekkehart Malotki in his book Kokopelli: The Making of an Icon. Based on decades of ethnographic research among Hopi Native Americans, Malotki believes "Kokopelli" comes from non-Indigenous people mispronouncing Kookopölö, a Hopi katsina, or respected spirit. Although Kookopölö never plays a flute, the character does possess a humped back, prominent penis and powers over fertility. Some rock art figures may well depict Kookopölö; others don't.

In the 90s, southwesterners caught "Kokopellimania," as Malotki calls it. New Age thinkers and environmentalists associated the images with enlightenment and nature. Meanwhile, marketers plastered penis-free flute players on countless commercial products. Today, a 32-foot Kokopelli sign — touted as the world's largest — stands in the parking lot of a Starbucks and Mexican restaurant in Camp Verde, Arizona.

In Zimbabwe, a stoic golden bird adorns the national flag, coat-of-arms and logos for hundreds of organizations. Squatting and gazing profile, the Zimbabwe Bird depicts a statue steeped with meaning for the African nation’s people.

The original carving belongs to a set of eight avian statues found at the archaeological site of Great Zimbabwe, a stone city raised roughly 1000 years ago. Today a UNESCO world heritage site, the ruins span nearly 1,800 acres — more than double the size of New York City's Central Park — and feature stone towers, enclosures and extensive 3-story walls. Made of millions of granite bricks held snugly without mortar, the structures are a testament to the ancient masons’ architectural skills.

But less than 2 percent of the site has ever been excavated, and that digging was mostly done by imperialist Europeans with racist motives and sloppy methods. Starting in the 1500s, Portuguese traders and missionaries spread rumors that Great Zimbabwe was built by people tied to the Bible's Queen of Sheba and King Solomon. By the late 1800s, when British forces occupied the region, Europeans credited the stone city to Phoenicians, Hebrews, Egyptians and more — "everybody other than the indigenous inhabitants," wrote archaeologist Edward Matenga, former director of the UNESCO site.

Today it’s well accepted that ancestors of the Shona people, currently Zimbabwe's ethnic majority, constructed the stone structures in the 11th century A.D. For another 400 years it thrived as a regional center, with trade connections across the Indian Ocean — evident from artifacts recovered from the site, including pottery and coins from the Middle East, Persia and China.

The most famous artifacts, though, are the bird statues, which inspired the national emblem. Carved from green-gray, slick soapstone, each statue features an eagle-like creature, perched on its haunches like an attentive guard dog. The birds themselves measure about a foot tall, but the full statues include decorated pedestals that rise to shoulder height. Between 1891 and 1903 Europeans “discovered” and took six birds to their museums and private collections. Since Zimbabwe’s independence in 1980, five have been returned and are now on display at the Great Zimbabwe Museum. One remains abroad in South Africa, in the estate of British imperialist Cecil Rhodes.

Eye of Horus and Other Ancient Egyptian Wedjats

Wander through a museum’s Egyptian exhibits and wedjat eyes will be watching you. The amulets, often made from fine glazed ceramics, feature an almond shaped eye from a human-bird hybrid. The brow and eyeball look like an ancient Egyptian person, complete with a cosmetic eyeliner streak extending from the outer corner. But additional lines and curls descend from the peeper, which represent markings below the eyes of falcons.

Wedjat-eye amulet. (Credit: © The Trustees of the British Museum)

Ancient Egyptians believed the symbol conferred health and healing. Tucked into the mummy wrappings, wedjat eye charms were thought to help the dead pass into afterlife.

Wedjats were variably depicted as right or left eyes, with different meanings. Right eyes generally represented the vengeful, but protective sun god, Re. The left or lunar eye symbolized Horus, a falcon-headed god. According to an Egyptian myth, Horus’ eye was plucked out during a fight, but restored. He then presented the healed eye to his deceased father, Osiris, so dad could enter the afterlife. So, left wedjats were more appropriate for injuries, illnesses and funerals, whereas right wedjats were preventative, protective charms.

These days you'll find right and left wedjats on all sorts of trinkets, jewelry and logos — even COVID-19 face masks.

This Tomb Contains 10 Mummified Crocodiles From 2,500 Years Ago