The Gates of Hell Makes for an Unexpected Destination

The Darvaza gas crater burns hot in Turkmenistan’s Karakum Desert, a farflung tourism site in one of the world’s most closed nations. 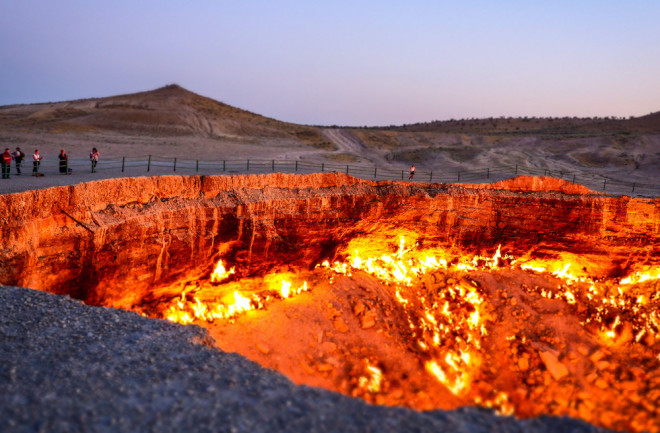 The Gates of Hell has been burning nonstop for more than half a century in Turkmenistan. Also known as Darvaza, the 230-foot-wide flaming crater is fueled by a hidden natural gas reserve. Unsurprisingly, the site — situated roughly 160 miles north of the capital city of Ashgabat — has been a popular destination for the isolated country’s few tourists (and a few ultra-resilient bacteria). But that may soon change.

In January, then-President Gurbanguly Berdymukhamedov asked his government to recruit a team of experts that could extinguish the flames, citing environmental and human health concerns — as well as lost petroleum profits.

Though Darvaza’s origin is shrouded in Cold War-era secrecy, some claim that Soviet scientists ignited the crater after a drilling rig collapsed in 1971. The inferno runs on methane: a buffet for unique extremophile bacteria, but also an extremely potent greenhouse gas. Thankfully, the fire converts the gas into carbon dioxide, which is around 80 times less damaging to the environment. “Trying to extinguish it has a high chance of not working and of making things worse,” says Mark Tingay, a petroleum geomechanics expert at the University of Adelaide in Australia.

If Turkmenistan’s government snuffs out the blaze by refilling the crater with earth, for example, the more potent greenhouse gas will likely continue to leak out through the porous soil. A more extreme fix could entail detonating a nuclear bomb underground. Such a maneuver, first executed in the Soviet Union in 1966, might melt enough rocks into glass to seal off the methane’s paths to the surface. But Tingay insists that leaving the fiery inferno as a tourist attraction remains the safest option.