Historian Andres Reséndez shares the overlooked story of a formerly enslaved ship pilot, along with powerful advances in navigation technology and a journey across the Earth's largest body of water. 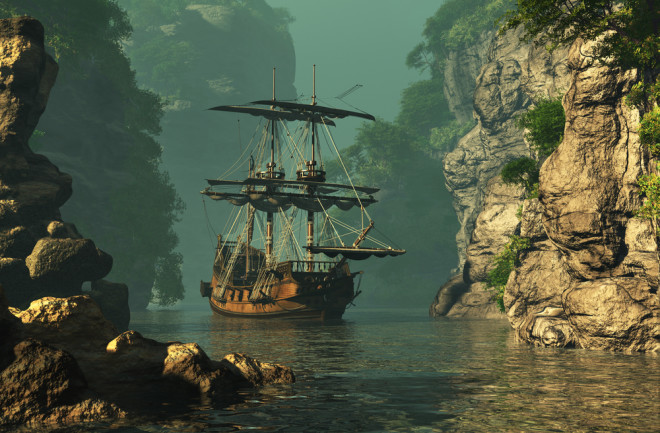 Between the 15th and 17th centuries, colonial powers desperately sought a route connecting the global East and West. The era was referred to as the Age of Exploration (also called the Age of Discovery). It was fueled by extensive and costly overseas imperialism and a competitive drive to conquer land among European powers including Spain, France, England and Portugal. Famous and arduous expeditions propelled the era into motion, such as Christopher Columbus’s journey to the Americas or Ferdinand Magellan’s discovery of the Strait of Magellan.

Some notable adventures have fallen under the radar. Take Lope Martín, for example. Though the name may not ring any bells, this Afro-Portuguese pilot became the first formerly enslaved Black man to complete the West to East return. Andrés Reséndez, a historian at the University of California, Davis, provides him proper credit and delves into his remarkable adventure in his upcoming book, Conquering The Pacific: An Unknown Mariner and the Final Great Voyage of the Age of Discovery. Reséndez not only recounts the Black mariner's riveting tale, but also explores the Age of Discovery’s impact on navigation technology and details the hardships that came with the grueling travels across the Pacific. To find a route to the Far East and surge ahead of the competition, Spain funded a costly expedition out of a port in Navidad, Mexico. Four ships were built in secrecy from their rivals and a multinational crew was recruited to set sail in 1564.

Among this crew of 380 people were the Augustine friar mariner Andrés de Urdaneta, who served as pilot of the flagship, and Afro-Portuguese pilot Lope Martín. Reséndez narrates Martín and Urdaneta’s subsequent journeys, which include a near shipwreck and bewildering (and sometimes violent) interactions with Pacific Islanders. He also examines the prejudices faced by Martín, who is suspected of treason after becoming the first man to complete the round trip across the Pacific. While Martín was investigated in Mexico and later sentenced to hanging (he later escaped), Urdaneta was allowed to return to Spain and receives all the glory for the expedition. Martín's tale has been long swept under the rug — until now.

Discover spoke to Reséndez to learn more about Martín's history-defining adventure and the inventions that made it possible.

Q: Why did you decide to focus your book on Lope Martín?

A: Because this voyage overall is fairly overlooked and historians mostly credit this friar mariner (Andrés de Urdaneta) with opening up the Pacific. I believe that Lope Martín was innocent and deserves credit as he was the first one to do it. He even had a lasting impact on cartography, or mapmaking. We know this because in 1594, a Dutch-Flemish astronomer and clergyman in Amsterdam named Petrus Plancius published a map of the world that included some islands that only the San Lucas (Lope Martín and don Alonso de Arellano's ship) had visited up to that time. For example, in the Plancius’s Orbis Terrarum (the map), the island of “Miracomo Vaz” or “Watch Where You Go" is featured, which was named by Lope Martín because, as he had said, “it would be convenient for later navigators passing near there to know."

So, clearly contemporaries were interested in the voyage that Martín had completed, his route, and his accomplishments. I was interested in the subsequent story. Because he was accused of abandoning the fleet in the middle of the ocean in good weather, he was ultimately sentenced to be hanged. So, I was trying to undo the historical unfairness done against this extraordinary Afro-Portuguese pilot.

Q: Travel today is largely quite convenient, so it's hard to imagine what crossing the Pacific was like during the 16th century. Can you paint a picture of that challenge?

A: It is not easy to convey the experience. It took on average three to four months to go from the Americas to the Philippines. Coming back took even longer and these voyages were repeatedly done after 1565 yearly or nearly so, so it could take up to six, seven or even eight months. You have to imagine a voyage lasting that long in which you basically are in very cramped quarters. somewhat like a good-sized urban apartment with about 100 people living in it with just boxes. They used chests to hold their belongings which also functioned as a chair or as a table. People came out three times a day with platters of food. Forks were not widely used in the 16th century in Western Europe, so people would eat with their own hands. There were also no facilities and no bathrooms. And of course, the situation in terms of health in these cramped conditions was very conducive in the spread of germs. These men were also going from one area to another, so they were going to a new suite of viruses and bacteria. So that’s from the standpoint of ordinary men.

However, in terms of the pilots and captains and the officers, this was the technological innovation of the era. In order to put together this expedition, the organizers had to procure the best pilots in the world and the largest ships probably ever built in the Americas. Above all, they needed to find a way to determine their position while in the middle of the ocean. The very advanced navigational techniques they used to find their latitude involved a fairly new system invented in the late 15th century that would measure the angle between the sun and the horizon at noon. A declination table was also used to find their position. These techniques were new and only the very best pilots could use them.

They also had to figure out how to determine longitude, which was a lot harder and would not be possible in the 16th century, as a proper system to measure it wasn't popularized until the 18th century (the marine chronometer). Sixteenth-century pilots approximated longitude by using a system based on magnetic declination. As much as an exciting adventure, it is also a story of technology and its triumph in guiding these vessels back and forth across the Earth's largest ocean.

Q: How did Lope Martín’s lookout ship compare in size to the other ships?

The fleet consisted of four vessels. The flagship called the San Pedro was about 550 tons. It may have been the largest ship ever built in the Americas up to that time. The second-largest vessel, the San Pablo, was about 400 tons. The third ship, the San Juan, was a big step down at 80 tons. The last and smallest ship in the fleet, piloted by Lope Martín and called the San Lucas, was merely 40 tons, a souped-up boat with merely eight barrels of water to cross the immense Pacific.

To give you a broader context, Columbus’s largest vessel during his famous 1492 voyage of discovery was about 100 tons and Magellan’s largest circumnavigation vessel was about 120 tons.

Q: Let's talk about the storm that separated Lope Martín from the rest of the crew. How did it hinder his journey?

A: Merely ten days after departing from the port of Navidad in what is now Mexico’s Pacific coast, a storm hit the fleet. There were no radios or GPS systems in the sixteenth century, so the four vessels had agreed on signals with flags during the day and lanterns at night to indicated that they needed to lower some sails to slow down and stay together.

Yet on Dec. 1, 1564, several clouds gathered during the day and developed into an evening storm. The flagship lowered the mainsail and made the signal to slow down, but the San Lucas forged ahead into darkness until it disappeared. Hours later, Lope Martín sounded the alarm and informed the San Lucas Captain, Don Alonso de Arellano, that the other ships were nowhere to be seen. The pilot explained that the San Lucas could not slow down too much because the sea would dump water over the deck and swamp the vessel. Lanterns were immediately be placed throughout the ships, but the separation continued during the next morning and over the next few days. Eventually, it became permanent.

From then on, the expedition became something of a race. The three largest vessels with the lion’s share of the resources remained together, while the smallest craft, steered by a remarkable pilot, struck out on its own.

Q: This story seems quite rich in history. Is there any research that you decided to leave out?

Overall, the book is about perspective because Lope Martín was unquestionably the first to cross the Pacific Ocean from the Americas to Asia and return. The book is based on his experience, but he was not the only one: Two months after his return, the flagship of the fleet that had also managed to reach the Philippines also returned. Of course, the leaders of the flagship accused Lope Martín of abandoning the rest of the fleet in the middle of the ocean, which was an unfounded accusation according to what I found.

The point is, I could’ve elaborated more on the biography of the pilot who was aboard the flagship. He was another extraordinary character who had befriended some of the survivors of Magellan’s expedition 40 years earlier. He had been sailing for a long time and then he was pulled out from the monastery in Mexico City to participate in this secret expedition that departed in 1564. Because the book is really focused on the story of Lope Martín, I couldn’t fully exploit all the information that I had on Andrés de Urdaneta. who had also completed the voyage across the Pacific.

Q: How did your history background help you write this book?

A: My background in history determined that I was able to find and learn about this expedition to begin with, but I would also say that my interest in sailing was a huge help. I am a sailor, I sail in the Bay Area and I have a sailing boat. I think that was even more fundamental as it gave me an appreciation of the incredible difficulties that these men must have encountered. If you sail on a regular basis, you very quickly learn to respect the sea and learn that the conditions can very dramatically shift at sea from one day to another. My sailing experience really allowed me to look at this story and these documents and information in a slightly different way than a land-based historian may have approached it.

These great voyages that made the world that we have today were incredibly messy human enterprises that we really need to investigate because they tell us a lot about our nature. They also prove how human nature continues to function in ways that are similar or comparable to what was happening in the 16th century. So, I learned that this is a story that is imminently relatable to the world that we experience today.

This interview has been edited and condensed for clarity.

4 Titanic Artifacts That Didn’t Go Down With the Ship