From petrified peach pits to an entire military barracks, excavations for the Metro C subway line have brought Roman history to the surface. 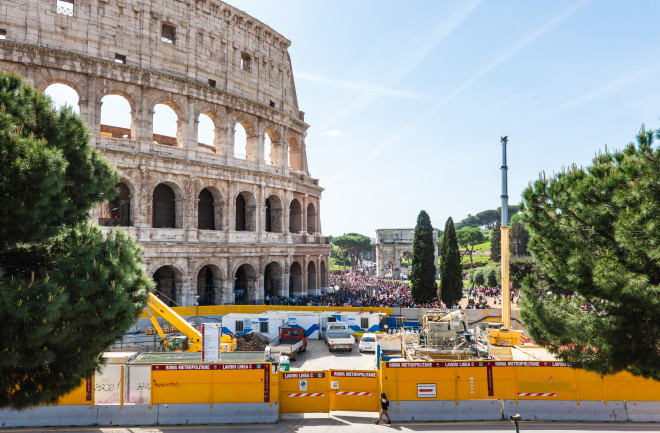 Poet George Eliot called Rome “the city of visible history, where the past of a whole hemisphere seems moving in funeral procession.”

Indeed, one can’t swing a she-wolf by the tail in the ancient Italian capital without clobbering an antiquity. The site has been occupied for around 10,000 years and the city itself was founded in 753 B.C. History is writ across its seven hills in brick and marble, with monuments, palaces, churches, and ruins at every turn.

This surfeit of heritage presents problems, however, when it comes to modernization. Breaking ground on a new project requires meticulous assessment — not only of potential effects on known structures, but also of what may lie beneath the surface. These appraisals (and their resulting discoveries) have slowed the progress of the already-ponderous Metro C subway line from the outer suburbs to the Colosseum. That's because nearly every ventilation shaft and exploratory excavation at a planned train station along the line have unearthed astonishing vestiges of the city’s past.

Rome is a living palimpsest: Its modern topography rests atop the remains of the previous city. Rather than removing every remnant of an old structure to make way for a new one, ancient Romans would just build right on top of its foundation. “You just level it off, and then you start building above,” explains Ian Haynes, an archaeologist at Newcastle University who has directed excavations unrelated to the subway beneath the Basilica of Saint John Lateran.

In some cases, the terrain was entirely remodeled. “He literally reshaped the lines of the hills, and he built on top of those,” says Haynes of Emperor Septimius Severus, known for his extensive building program. As the city expanded over the centuries, whole buildings were engulfed, and entire streets were backfilled and surmounted by new developments.

“There is a history going back centuries of antiquarians and clerics literally digging out the basements of their own buildings and revealing these things,” adds Haynes. But modern excavations haven’t always been careful. Rome’s first subway line, Metro B, was begun under dictator Benito Mussolini in 1930. Many artifacts were heedlessly discarded in the interests of finishing the project, which was stalled by the outbreak of World War II and not finished until 1955.

Half a century later, things hadn’t gotten much better. A parking garage hastily erected to accommodate visitors for the 2000 Vatican Great Jubilee saw similar disregard. “They found that the construction crew was throwing away ruins in the middle of the night,” recalls Thomas Rankin, an American architect and professor in Rome.

This negligent approach to dealing with accidental finds was memorialized in Federico Fellini’s Roma. In the film, a construction crew working on Metro B drills through a wall only to find a spectacular villa, replete with brilliant frescos. To their dismay, the crew watches the brilliant images fade and crumble upon exposure to the outside air. While this scene is metaphorical, as relics don’t actually dematerialize in a matter of minutes, they are certainly at risk from construction.

Digging Up the Past

The Superintendence for the Archaeological Heritage of Rome, an agency responsible for safeguarding relics within the city, had no intention of allowing anything remotely resembling Fellini's fictional fiasco to happen. By the time ground was finally broken on Metro C in 2007, over a decade after plans had first been initiated, the organization already had an idea of what they might encounter beneath the city’s surface.

An intensive series of preventive examinations of the proposed sites for the line’s 24 stations, as well as the ventilation shafts punctuating its 11.9 mile path, first kicked off in 1999. They've continued throughout Metro C's construction. Historical buildings and monuments in its path were reinforced, as well. These early forays turned up a number of marvels: a columbarium, filled with urns containing ashes and bones, as well as the largest Imperial-era reservoir yet found and a number of aqueducts. One is thought to be Aqua Appia, Rome's first aqueduct, says Jan Gadeyne, a professor of archaeology at Temple University in Rome. “That was important because we don't really know where that aqueduct goes,” he says.

Another site turned up wooden boards used in the construction of a foundation relates Nicoletta Saviane, an archaeological consultant who works with the superintendence. “We usually can’t find wood, a perishable material,” she notes. “With lab analysis, we were able to determine the type of wood — oak in this case — and its origin, France.”

Several planned construction sites had to be relocated due to the finds. Notably, a station planned for a square known as Largo di Torre Argentina was also found to impinge upon ruins, including the Theater of Pompey, where Caesar was assassinated. (The sunken square is currently in the process of being transformed into an open-air museum, set to open to the public next year.) And in 2007, exploration at the proposed site for a station at the Piazza Venezia uncovered the Athenaeum, the legendary school founded by the Emperor Hadrian.

A number of subway excavations turned up more significant relics than anticipated. “When you get into such a dense urban context, you really don't know what you’re going to find,” says Gadeyne. In 2014, a farm dating to the first century A.D. was unearthed at the San Giovanni station site. Tools, a massive water works and agricultural remains, including peach pits, were brought to the surface. This strikes Haynes as particularly significant. The glorious edifices that stud the city’s fabric are one thing. “But what was life like in terms of food supply and access in the suburbs?” he says. Peaches, for example, were a relatively recent introduction from Asia at the time of the farm’s operation. Like the French wood, they underscore the extent of Rome’s trade network. Rather than relocate the station, engineers designed it around the site. Opened in 2018, it now serves as both a commuter hub and a museum.

Even more spectacularly, in 2016, construction on the adjacent Amba Aradam site led to the discovery of a 43-room military barracks dating to the first century A.D., with modifications from the next two centuries. It may have housed as many as 200 Roman soldiers — an indication of the persistent military presence in the city at the time, says Haynes. Some of these soldiers may have been buried here, as well: Thirteen sets of bones emerged upon further digging. Two years later, a lavish villa was found nearby. Appointed with interior fountains, mosaic floors and frescoed walls, it is believed to have been the commander’s residence, or domus. Like the nearby farm, these structures will be integrated into the station.

A lavish complex planned for the Colosseum stop, next on the Metro C line, has been scrapped due to budget constraints. And, along with Amba Aradam, it will likely not open until 2024, more than two decades after the projected completion date. Still, the project marches on, with tunneling on the revised Piazza Venezia station completed in 2020 and plans for a museum to highlight the ruins at that site in the works.

Janus, the two-faced god of transitions and doorways, would be pleased. His dual visage allows him to keep an eye on both the past and the future. Now, as citizens and visitors commute to the city center, they are able to do the same.

4 Titanic Artifacts That Didn’t Go Down With the Ship