Meet Ceratosaurus, The Great Horned Beast Of The Jurassic Period

This carnivore, Ceratosaurus, was smaller than other theropods like the T. rex, but its distinctive nasal horn left a lasting mark on pop culture. 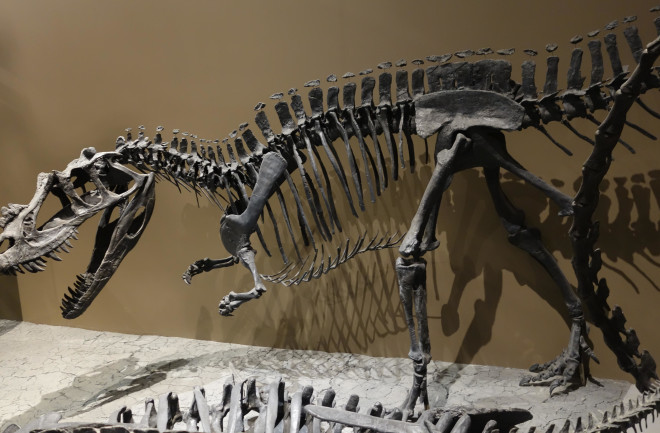 A cast of Ceratosaurus on display at the Natural History Museum of Utah. (Credit: Jens Lallensack/Shutterstock)

Ceratosaurus specimens are indeed rare. In fact, until recent decades, the only intact skeleton stood at the Smithsonian National Museum of Natural History, says Matthew Carrano, a paleontologist and curator at the Smithsonian Institution. But in spite of that, the species has made a serious impression on pop culture. “It has a horn that’s unique for a carnivorous dinosaur, which gave it some personality,” says Carrano. “And, as a result, it’s appeared in children’s books, [the 1925 film] The Lost World and in Jurassic Park III.”

Compared to other carnivores, particularly Tyrannosaurus rex, the species was not only rarer, but also smaller, says Carrano. The largest Ceratosaurus specimens are only about two-thirds as big as a T. rex, capable of reaching up to 25 feet in length and weighing nearly 2,200 pounds. (For comparison, the T. rex tops out at around 40 feet in length.) Its legs weren’t as long as other carnivores, which means it likely wasn’t super speedy. But in other ways, it bears striking similarities to T. rex, including its three-toed feet, sharp teeth, stubby forelimbs and upright stance.

How Did It Compare to Other Carnivores?

Ceratosaurus lived around 150 million years ago in the Late Jurassic Period, the epoch that’s famous for long-necked sauropod dinosaurs like Brontosaurus and Diplodocus, as well as Allosaurus and Stegosaurus. It had an outsized muscular tail that could have been good for swimming; scientists think that it may have been an aquatic predator, much like crocodiles that lived around the same time.

We can’t know for sure what Ceratosaurus ate in its environment, but we do know from its knife-life teeth that it likely sliced and diced its prey. By contrast, T. rex’s teeth were long and bulky, which made it more capable of biting through bone, says Carrano. “The head and feet were probably the main tools for catching and killing things,” he says.

Unlike other colossal carnivores that once roamed the Earth, Ceratosaurus was not one of the largest living dinosaurs of its era, says Carrano. As a result, “it wasn’t preying on giant sauropods.” More likely it was eating smaller animals. And just like carnivores today, it probably went after young, old and sick prey that were easier to catch. There’s also no evidence that it was a specialized predator living on one kind of food, Carrano adds.

While specimens are rare, fossils have mostly found in the U.S. in places like Colorado, Utah and Wyoming. Fossils from a similar species — or even a Ceratosaurus — have also been found in Portugal. In the late Jurassic, Europe would have been pushed up against the eastern U.S. as part of the supercontinent of Pangea, so it's not impossible to imagine that some dino remnants ended up across the pond.

Why Did It Go Extinct?

Ceratosaurus was not among the last dinosaurs — those who would have fallen victim to the asteroid that barreled into our planet some 66 million years ago. Scientists still don’t exactly know why it went extinct. But they do have some clues, according to Scott Persons, head curator of the Mace Brown Museum of Natural History in Charleston, South Carolina. One of which is the fact that Ceratosaurus lived alongside fellow carnivore Allosaurus, which was faster, bigger and better equipped to hunt large sauropods. As a result, says Persons, “competition might have been a factor.” But it might also have gone extinct naturally — many dinosaurs disappeared as new species were emerging during the Jurassic Period.

Still, there’s a good deal about Ceratosaurus that we don’t know, says Persons. We don’t know how aquatically adapted it was, or whether it regularly hunted in the water. We also don’t know how social it was compared to contemporaries like the Allosaurus. And that distinctive nasal horn that's reigned so prominently in popular culture? Well, that’s a mystery too. Paleontologists are still in the dark about whether it was used as a weapon against other dinosaurs (some deem this theory unlikely) or whether it was just for ornamentation.